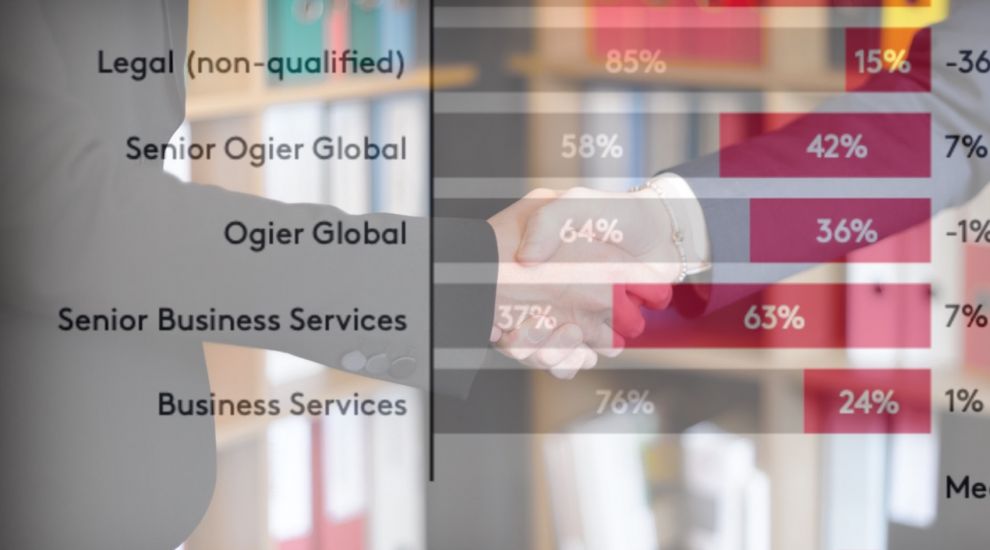 Ogier has released a report on the pay gap in its organisation, showing that, due to the amount of men in senior positions, there is a 30% difference in the mean hourly pay of men and women at the firm.

The firm’s new report presents data on the firm's overall gender pay gap, while also breaking down pay gaps at different seniority levels at the firm.

Explaining the figures, the report reads that: "These figures do not relate to equal pay (men and women being paid equally in the same roles carrying out equal work).

"We monitor our reward practices and are confident that as a result of our rigorous review process we pay our people fairly for the same roles.

"Where pronounced pay gaps exist, they reflect the make-up of our workforce, with fewer women in the most senior positions and a much higher proportion of women in administrative roles."

The report found that "having significantly more men in senior positions, widens the pay gap, remarking that "achieving real progress relies on improving the gender balance at the most senior levels of our business." 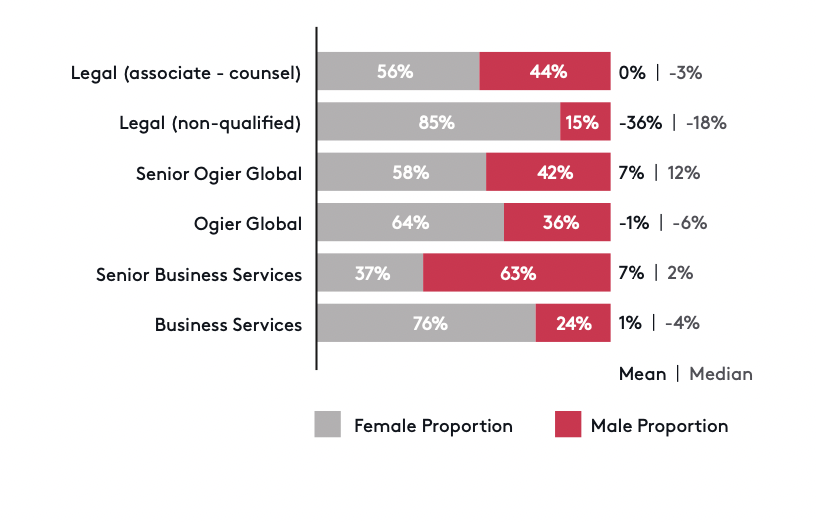 Pictured: The pay gap is predominantly from average earnings in senior roles, with there not being a mean pay gap for our qualified lawyers from associate level to counsel, and in Ogier Global and Business Services from entry level to managers.

Breaking the figures down, the report noted that they do "not have a mean pay gap for our qualified lawyers from associate level to counsel."

It continued: "Legal (non-qualified) includes paralegals, trainees and articled clerks, the jurisdictional pay differences and higher number of women in this group creates an overall pay gap in favour of women. 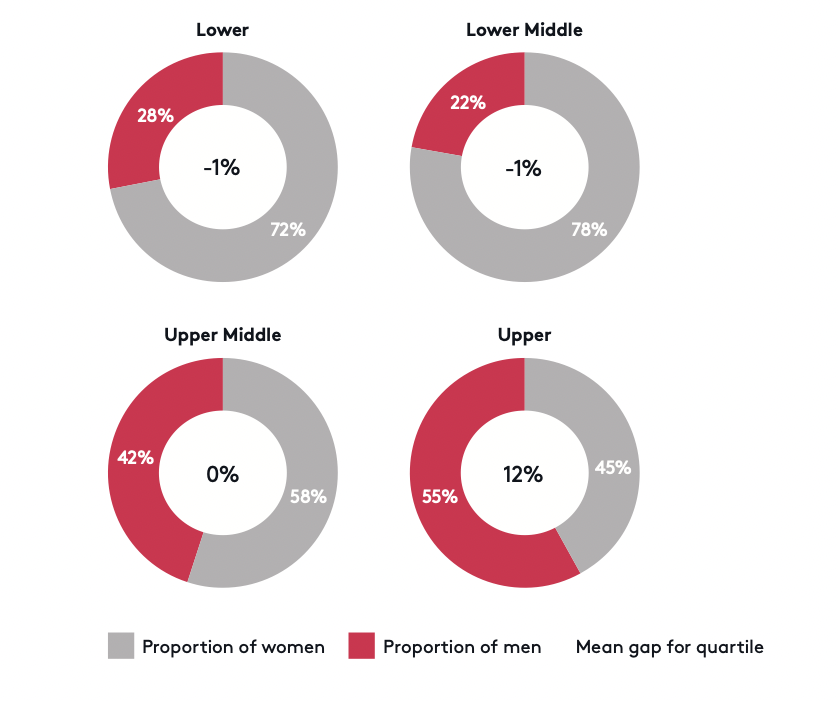 Pictured: These quartiles show all employees in order from lowest to highest FTE hourly pay, divided into four quarters, with an equal number of employees in each section.

"We define leadership as partners, Ogier Global directors, and Business Services directors as this is the group which has the most influence over the employment, development and progression of our people. 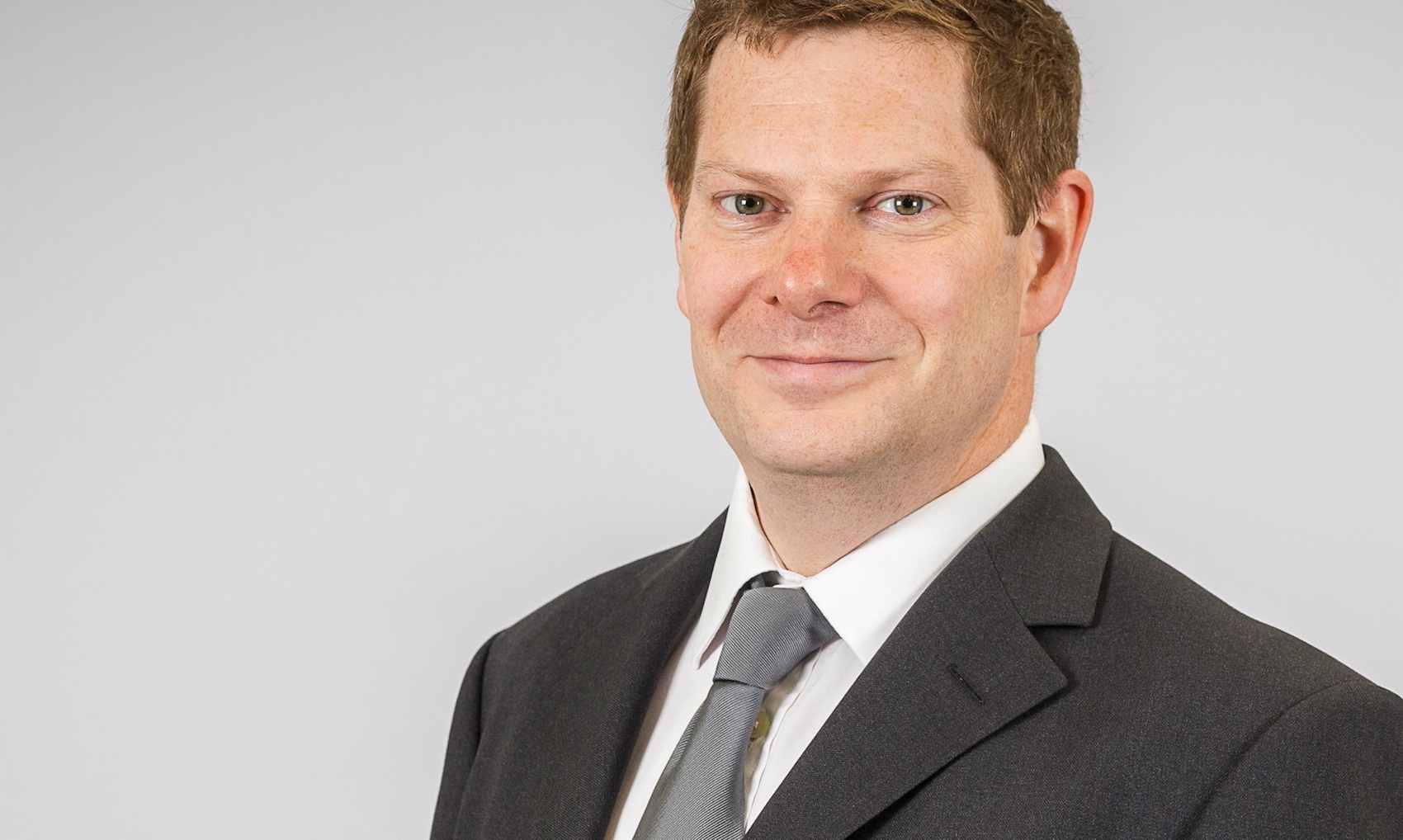 Pictured: Sponsor of Ogier's diversity and inclusion initiative Edward Mackereth said publishing the pay gap was "important" to the firm.

Edward Mackereth, Global managing partner and sponsor of Ogier's diversity and inclusion initiative, said: "We've published this report as we move towards greater transparency with our people, our clients and our wider communities.

"Publishing our pay gap report is important to us not only because of our commitment to diversity and inclusion, but also because we need to really understand an issue and its scale to be able to change it.

"The pay gap extends beyond any one firm, so while we are the first offshore law firm to publicise ours, we hope that we won't be the last.

"We're mindful that gender is just one perspective from which the pay gap needs to be approached, and that a number of groups face more barriers than others in progressing to senior positions.

"As we collect more data internally, the format and content of our future pay gap reports will develop to provide a more detailed picture of the pay, retention and promotion gap across other protected characteristics."