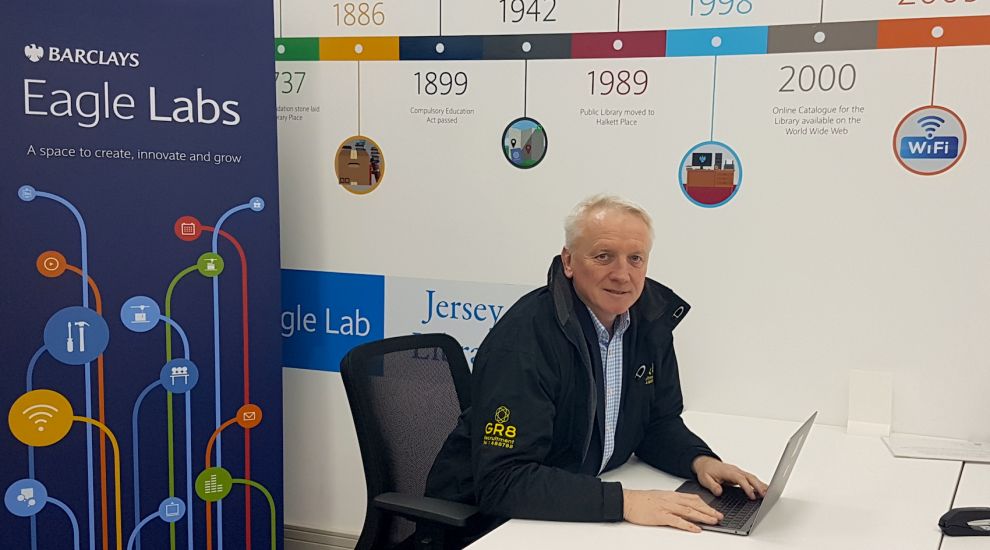 A local entrepreneur, who launched and grew his recruitment firm from a hub in Jersey's library, is encouraging other budding businesses to do the same, after a successful first year.

Lee Madden, founder and Managing Director of GR8 Recruitment, started his company in January 2018 and has since grown from a one-man organisation to a team of six, which is now working in the company's own premises.

But he said none of that would have been possible without Jersey Library-based, Barclays Eagle Lab, where it all began. The area provides desk and meeting space - ideal for the local entrepreneur as he took his first steps.

Mr Madden said he initially worked from his home office in St. Mary, but soon realised he needed to be closer to town. However, with commercial premises being expensive, he chose to start his business at Eagle Lab so that he "could save on overheads and focus on growing my business."

“The Eagle Lab has been instrumental in my business’ success. We used everything there – even the laser cutter to make signage for our new premises. The staff there are really friendly, and it was great to be able to interact with like-minded people," Mr Madden explained.

Having now left the Lab to move into GR8's own premises, Mr Madden is encouraging fellow entrepreneurs looking for a place to start to use the Eagle Lab and its facilities, which he says are "second to none". They even offer free tea and coffee," he added.

Ed Jewell, Chief Librarian at Jersey Library, commented: "We’re really proud of the Eagle Lab that we have here at the library. The lab builds on our library resources to help small businesses and individuals to learn, create, innovate and grow... We’re delighted that the lab has helped Lee to grow his business, and we wish him and his team all the best in their new premises.”

Neil McCluskey, Head of Corporates at Barclays Jersey, welcomed Mr Madden's success. “We are delighted that by taking advantage of the Barclays Eagle Lab, Lee has helped to secure his future prosperity, and created five new jobs. Hopefully his example will be an inspiration to others, and we would welcome visits to the lab from all budding entrepreneurs and existing business owners.”

Boat Show to raise funds for Girlguiding and Scouts

Do you know an inspirational woman?