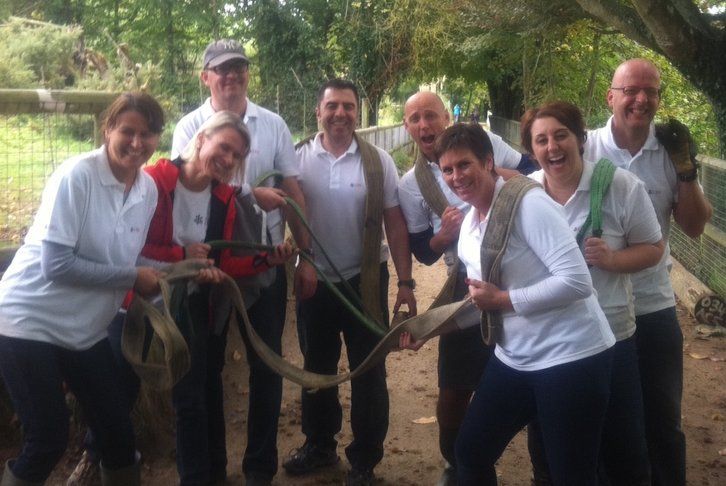 The Sulawesi Macaque, also known as the crested black macaque or the Celebes ape, is currently listed as endangered by the International Union for Conservation of Nature due to hunting and the clearing of their native habitat. It is found in Indonesia on the Sulawesi island, Bacan island, and on the shores of the Philippeans.

Over a three-day period, 23 staff members from UBS took part in a number of jobs including painting the macaque house, clearing the undergrowth and vegetation from the outside enclosure, preparing for the building of a new climbing frame and digging out the stream and pond to enable the water to flow again.

"The teams did an amazing job,” said Stephanie Moore of Durrell Wildlife Conservation Trust. “On one day, the team made an amazing effort carrying telegraph poles from the organic farm."

Last year UBS staff helped to remove an old polytunnel and install a new one donated by the bank, in the Organic Farm. UBS staff can only wonder what next year's project will be!

Sue Holland, Senior Trust Officer said: “UBS has supported Durrell for many years as one of the company’s partner charities in Jersey. As part of the support we provide, volunteers take part in an annual two or three day project, to help Durrell maintain its grounds and enclosures.”

As well as helping with projects at Durrell, UBS also provides financial support to the wildlife conservation organisation. Staff from UBS help to deliver a leadership course at Durrell’s Academy, promoting best management practice to those individuals best placed to make a significant impact on protecting endangered species and encouraging habitat recovery.