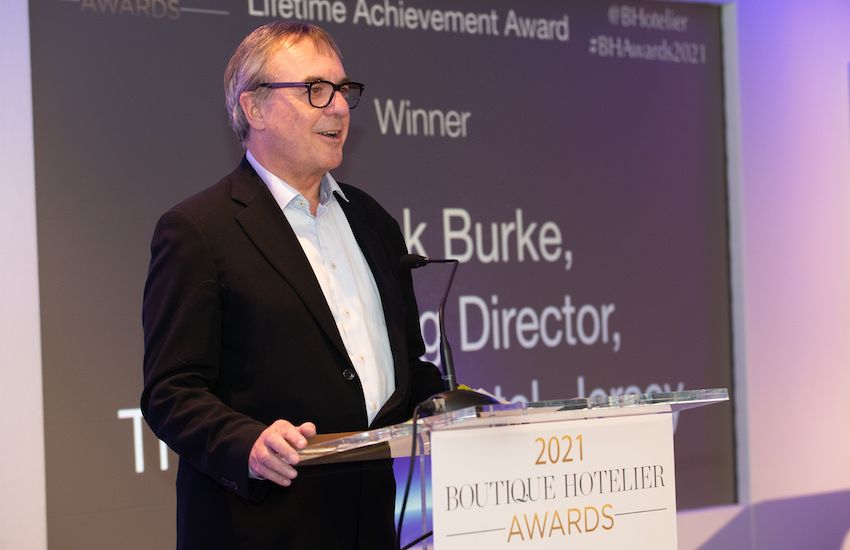 The owner and Managing Director of The Atlantic Hotel and Ocean Restaurant has received a Lifetime Achievement award.

Patrick Burke was honoured at the Boutique Hotelier Awards in London earlier this month.

Opened in 1970 by Henry Burke, The Atlantic Hotel celebrated its 50th anniversary in May 2020. Patrick Burke joined the family business in 1985 and succeeded his father as managing director in 1987.

Zoe Monk, editor of Boutique Hotelier said: “Patrick is an extremely deserving winner of our inaugural Lifetime Achievement Award. The Atlantic’s recent celebration of 50 years in family ownership is a remarkable achievement for an independent property. His commitment to the business was demonstrated strongly in 2012 when he purchased all the shares in the hotel, securing the future of the company as an independent family business for years to come.

“Despite the challenges of running a seasonal hotel offshore, The Atlantic never rests on its laurels and each year profits are ploughed back into the business for improvements, developments and new initiatives to ensure the longevity of the hotel.”

Patrick Burke is the sole Channel Islands member of the Master Innholders. Membership is awarded to practising hoteliers who have demonstrated not only their innkeeping ability, but also their continuing support for improving standards within the industry. He is a Fellow of the Institute of Hospitality and has been given the Freedom of the City of London.

He commented: “As the hospitality industry embarks on what will be a long process of recovery from the pandemic, it was very special to attend such a successful event and to get together with the teams behind so many of the leading boutique hotels from around the UK. It was incredibly brave of Boutique Hotelier to launch an awards event of this scale at this point in time and it demonstrates their commitment to the industry as they continue to go from strength to strength.

“I am very conscious that by honouring me Boutique Hotelier also honours The Atlantic Hotel and Ocean Restaurant and the hospitality industry on the island which is increasingly known for the highest standards of food and service.

“It has been a privilege to run The Atlantic for the last 35 years. So much of our success can be attributed to the incredible team of people who have worked with us over that time. I’d like to thank Zoe and all at Boutique Hotelier for recognising the work that we do as we continue to move forward as an independent family business.”