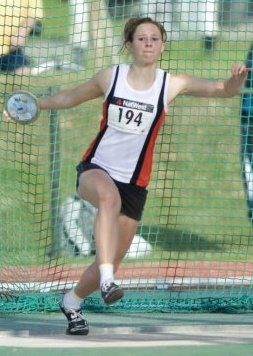 Two young Jersey athletes have received funding to help them develop their full potential and achieve their sporting ambitions.

Discuss champion Shadine Duquemin and hurdler Stanley Livingston have each been given £1,000 SportsAid Award from RBC Wealth Management. This is part of a broader sponsorship that includes 21 athletes from the UK and Jersey, all aged between 11 and 19 and specialising in sports including athletics, boxing, cycling, skiing, swimming and tennis.

SportsAid is the only national charity of its kind, proudly supporting young British sportsmen and women who aspire to be our next Olympic, Paralympic, Commonwealth and world champions.

Mr Livingston said: “I have competed in the junior Island Games in both the 400m and 400m hurdles, and hope to make the step up to the main Island Games in Jersey next year. This considerable support from RBC Wealth Management will mean a huge amount to me and my family in reaching that goal.”

Miss Duquemin is the under-20 and under-23 British Champion and is ranked No 1 in discus in the UK for both categories. She is also a double Island Games champion and discus record holder.

Stuart Rutledge, CEO, British Isles and Caribbean, RBC Wealth Management, said:  “We are very pleased to be supporting the aims of SportsAid, which has such an excellent track record in fostering the best of British sporting talent. It will be thrilling to follow the progress of these budding local athletes.”

New Head of Investments at Nedbank