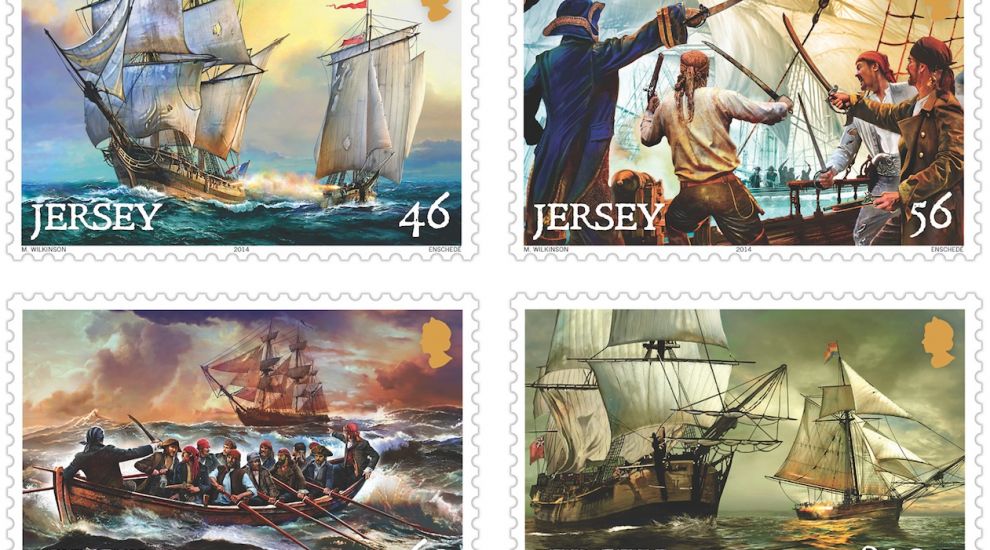 Scenes depicting episodes from the history of Jersey’s pirates and privateers feature on a set of four stamps to be issued this week by Jersey Post. The stamps have been painted by Mark Wilkinson and are based on research assisted by Jersey Heritage’s Head of Community Learning, Doug Ford.

Melanie Gouzinis, Philatelic Manager at Jersey Post said: “We were very keen to issue this set of stamps. Jersey’s maritime history is a source of lots of exciting stories and Mark was able to interpret our research notes to bring them to life with some magnificent artworks.”

Three centuries ago, the easiest and most economical way to transport goods in bulk was by sea and certain members of the seafaring community, who could be considered both enterprising and unscrupulous, saw it as an ideal way to make money. However, it soon became quite difficult to differentiate between a pirate and a privateer and so licences, called "Letters of Marque" were issued.

Privateering was the name given to this form of legalised piracy that became internationally recognised in 1689. As time went on, commissions were issued to vessels authorising their owners to attack and plunder the King’s enemies during war time. Any prize was sold and the profit was divided between the State, the ship owners and the crew.

Mr Ford said: “Once legalised, Jersey ship owners were quick to take advantage of the situation and during the French wars 1692-1697, there were eight Jersey vessels engaged in privateering capturing, between them, 36 prizes. These numbers grew significantly over the next few years but the fact that the other countries also issued Letters of Marque meant that the hunter could also be the hunted.”

With the end of the Napoleonic Wars in 1815, peace came to Europe and privateering fell into disuse until it was finally abolished in 1856 bringing with it the end of an era which had brought prosperity to the Island.

Jersey Post bounces back after three years of losses