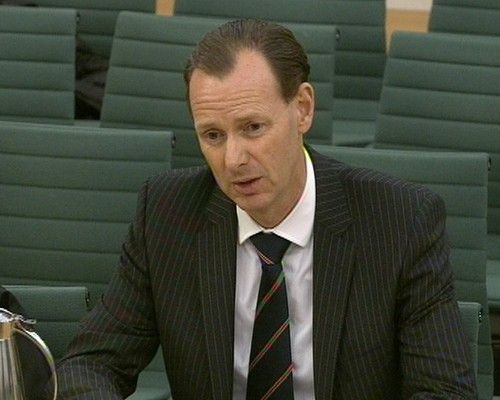 Small businesses from Bath to Bradford are having their lifeblood sucked out by "vampire" banking practices, the author of a report alleging unscrupulous behaviour by Royal Bank of Scotland has told MPs.

Lawrence Tomlinson gave evidence to the Treasury Select Committee about the "shady" behaviour detailed in his report, which accuses the state-backed lender of driving firms to collapse in order to profit from their property assets. Mr Tomlinson claimed viable businesses were placed into the hands of the bank's turnaround division, the Global Restructuring Group (GRG), only to find it was in effect a debt collection unit stripping their assets.

"They trust them all the way down the line. Usually by the time they realise what's going on, it's too late," said Mr Tomlinson, who is entrepreneur in residence at the Department of Business, Innovation and Skills.

Mr Tomlinson said he was frustrated at the widespread belief that banks have been helping to keep some "zombie" firms alive and said instead it was small firms that had been the victims of "vampire" practices by being hit with heavy charges.

"They are kept in GRG and as soon as they get any cash to invest and grow it is just taken away," he told MPs. "We have seen people's charges being exactly the amount of profit they have made."

Mr Tomlinson's allegations about RBS, which were published in a report in November, has already sparked a forensic probe by City watchdog appointed investigators, which could lead to a full enforcement investigation.

The bank, which is 80%-owned by the Government, has also hired law firm Clifford Chance to look into the claims.

Mr Tomlinson told MPs he had been contacted by 200 businesses for his report, the vast majority in relation to RBS's GRG division. Since it was published this had increased to "well over a thousand".

He also said the claims about RBS were the only ones that "followed a clearly identifiable pattern - which is what really disturbed me".

Mr Tomlinson said: "Wherever I go, people come to me and tell me their tale of woe."

He gave an example of one engineering firm, established for 30 years and exporting, that was forced to lay employees off after its overdraft facility was taken away.

"It is absolutely infuriating. What concerns me about it is it is not just one region or one office. It could be in Bath, it could be in Bradford."

Mr Tomlinson has claimed that firms not necessarily in immediate financial distress are "engineered" into GRG, sometimes through small technical breaches of loan terms, such as late filing of minor financial information.

They are then hit with exorbitant rates and fees, which in some cases cause them to collapse, allowing RBS to buy their property and assets on the cheap for the benefit of its West Register property arm, according to the report.

He told MPs: "A typical business that GRG and West Register seem to like is a business that has got assets that they can recover debt on, whether or not it's meeting its cash flow requirements."

Mr Tomlinson said he had been told by a whistleblower they could not remember a business coming back once it had been placed into GRG.

He said he did not believe the claims at first but had looked in detail at allegations.

"I am under no illusion that how shocking these assertions in the report are and I was shocked when I came across them," Mr Tomlinson said.

RBS said at the time of Mr Tomlinson's report that GRG "successfully turns around most of the businesses it works with" but added "not all businesses that encounter serious financial trouble can be saved".

An RBS spokesman said: "The vast majority of businesses that have gone through GRG have had a positive outcome, either returned to the main bank, rebanked or paid their debt back, with only a minority facing insolvency.

"These are serious allegations that have done damage to RBS's reputation and the independent review by Clifford Chance we have commissioned will examine these.

"It is important to note that the most serious allegation that has been made is that RBS conducted a 'systematic' effort to profit on the back of our customers when they were in financial distress.

"We do not believe that this is the case and no evidence has been provided for that allegation to the bank."