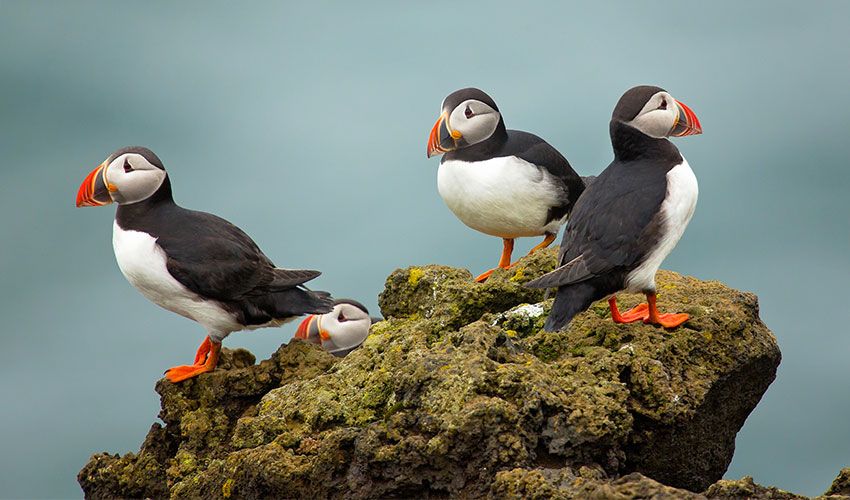 The National Trust for Jersey and Birds On The Edge are delighted to confirm that all four pairs of Puffins have returned to their breeding sites in the North Coast, and that at least one puffin chick, or ‘puffling’, has hatched.

Recent surveys have detected activity at the four nesting sites which make up Jersey’s small puffin colony. The sites are located in the cliffs between the land restored by the National Trust at Plémont and Grève de Lecq bay. The actual nests are found in crevices along the cliff-face below the slopes of bracken. A pair of puffins has been seen taking sand eels to one of the nests, which is a clear indication that the egg has hatched and there is a hungry puffling to feed. The adult birds do not eat at their nest, in order to keep it as clean as possible.

It is believed that the return of all eight puffins to Jersey, as well as their early breeding success, suggests that they have not been concerned by the willow puffin sculptures nor by the public celebration which was held earlier this year.

Birds On The Edge asks all members of the public to be mindful of the guidelines of the Seabird Protection Zone, Plémont and Grève de Lecq, and to avoid visiting this area by boat between March and July. The presence of boats and other watercraft might disrupt natural behaviours such as incubation, fishing, or feeding the chicks. These guidelines are already observed by leisure boat operators, as well as by local fishermen who only visit the area to check their pots.

As the Jersey puffins nest in rock crevices and between boulders below the coastal slopes, they are out of sight when in their nests. When not incubating or tending to the puffling, the adult birds can often be seen bobbing on the waters below the cliffs. The safest way to watch puffins is to follow the newly created Seabird Trail along the public footpath, which indicates various vantage points and seabird species along the way. The Seabird Trail booklet can be picked up from cafes both at Plémont and Grève de Lecq, and can also be downloaded from the National Trust website. The public can also attend any of the free puffin watches that will take place over the summer holidays. For date announcements please follow Jersey Birding Tours and the National Trust for Jersey on social media.