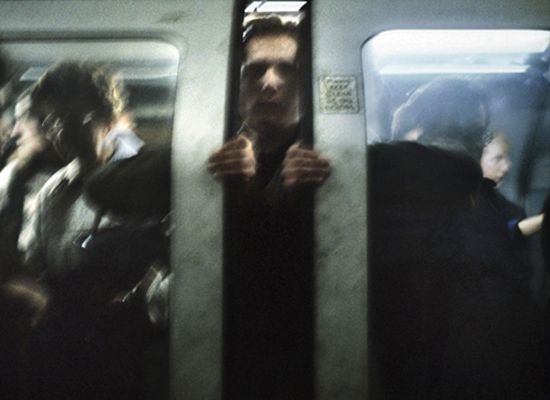 Simon MacDonald, writer and creator of the piece, says that: “It's a great pleasure to be bringing this back to the JAC after the warm response we got from its original residency in Oct 2018.  So many people said they would have come to see it again as they weren't quite sure what to expect on the night. Once they'd seen it, many felt they would have got even more out of a second viewing - so, here we are again!  There's been time to reflect on the content, tweak and further hone both image and text, so I'm really looking forward to seeing it staged again - plus I've expanded the playlist so expect even more vintage 80s pop.

There's been so much interest in Bob Mazzer and his work recently  - he's just published a career retrospective with a foreword by Will Self, who writes that Mazzer's concerned with 'the very matter of being', and I couldn't agree more with that. His portraits speak so much of life and living, thought and feeling.  It's no surprise to me that the London Underground has been the focus of other 'magpie' photographers like Stefan Rousseau and Mike Goldwater - it's a fascinating subject.

The four actors - Alex Alderton, Andrew Davey, Caroline Stone and Richard Pedley - have been so on it during the rehearsal process and they have made the photos fizz with sound and motion - I'm delighted with the way it's shaping up. I'm looking into taking it to the UK this year and the next, so this two-nighter is the perfect preparation for that. We're also filming parts of the process right up to and including the opening night so I can show would-be co-producers and venues exactly what the project is all about. I'm grateful to the JAC and ArtHouse Jersey for their amazing support in this venture.”