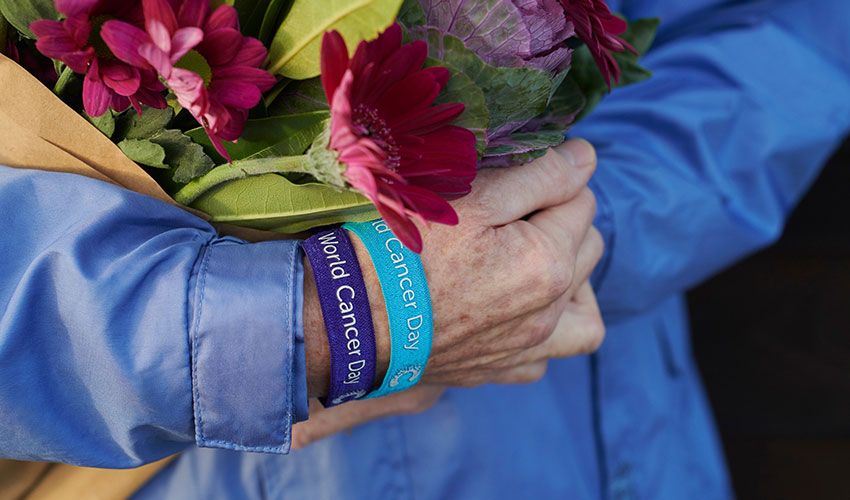 ISLANDERS are being asked to show support on World Cancer Day for everyone affected by the disease.

Cancer Research UK is calling on the public to donate or wear one of the charity’s Unity Bands with pride on Friday, February 4 – which also marks the charity’s 20th anniversary.

Wearing a Unity Band is a way of showing solidarity with those affected. Available in  pink, navy and blue – the wristband can be worn in memory of a loved one, to celebrate people who’ve overcome cancer or in support of those going through treatment.

Marked on February 4, World Cancer Day is an international initiative, uniting people across the globe to take action against the disease.

For Cancer Research UK the awareness day takes on extra significance this year, as it celebrates its 20thbirthday and pays tribute to its supporters for the part they have played in funding cutting-edge research.

Their generosity has helped to reveal more of cancer’s secrets and more ways to beat it – leading to more people than ever in the UK surviving their cancer for 10 years or more.

Although formed in 2002, the charity’s history dates back to the founding of the Imperial Cancer Research Fund in 1902. Its work has been at the heart of some of the biggest developments in cancer, from radiotherapy to some of the most used cancer drugs around the world today.

By donating or getting a Unity Band, people can help Cancer Research UK to keep making breakthroughs such as this, as it fights back from the impact of the pandemic.

Lynn Daly, spokesperson for the Channel Islands, said: “This past year proves, more than any other, the value of investing in science and medical research. Thanks to our supporters, we’ve achieved so much. Every day we see the benefits of research we’ve previously funded being realised, helping people live longer and healthier lives.

“1 in 2 of us will get cancer in our lifetime**, so we will never stop striving to create better treatments for tomorrow. That’s why, as we mark our anniversary this World Cancer Day, we hope people will wear a Unity Band with pride - knowing they are helping to save and improve lives for generations to come. We've come so far. And we will go much further. Together we will beat cancer.”

Cancer Research UK was able to spend over £27 million in the South East of England alone last year on some of the UK’s leading scientific and clinical research. Many Channel Island cancer patients receive treatment at the charity’s Southampton base. It is considered the ‘local’ hospital for cancer treatment, as well as the closest hospital for clinical trials.

Unity Bands are available in the Cancer Research UK shops in St Helier and St Peter Port and online at cruk.org/worldcancerday for a suggested £2 donation.

FACT FILE: A LEGACY OF RESEARCH

World Cancer Day on 4 February marks 20 years since Cancer Research UK was formed. However, its history goes back much further, to 1902, with the founding of the Imperial Cancer Research Fund.

In that time the charity has made transformative steps in the prevention, diagnosis and treatment of cancer including:

1 in 2 of us will get cancer in our lifetime**. All of us can support the research that will beat it.

To play your part visit cruk.org/worldcancerday.