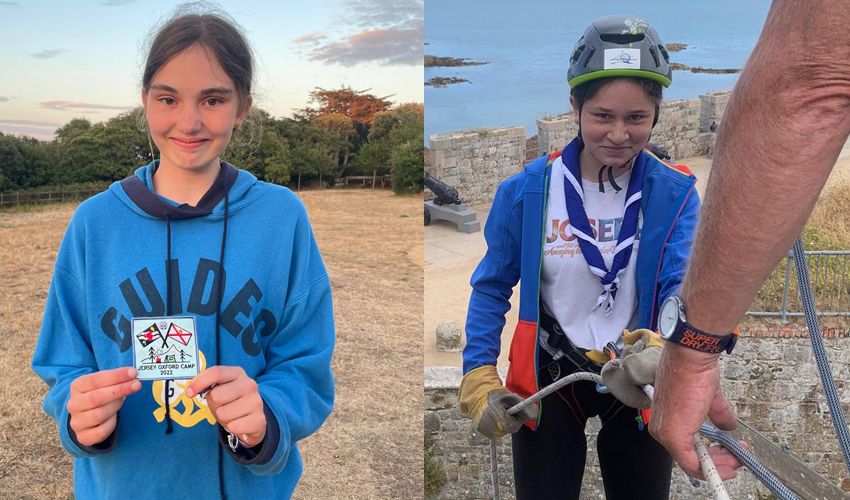 Last week, Girlguiding Jersey members welcomed 20 girls and adults from Oxfordshire for a week-long camp which has been over 15 years in the making.

The Oxford Jersey Camp took place from the 23rd to the 29th July at Les Creux. As well as taking part in more traditional Girlguiding activities like pitching tents, singalongs and crafts, the girls also abseiled at Elizabeth Castle, tried kayaking and rock diving, and had a silent disco on a vintage bus.

The camp was the idea of local Girlguiding leader Jenny Pathmarajah and Oxford-based Katy Fifield. The two first met at Durham University in 2005 and both became Guide leaders. Jenny went on to become a Girlguide leader in 2006 and Katy followed in 2014. 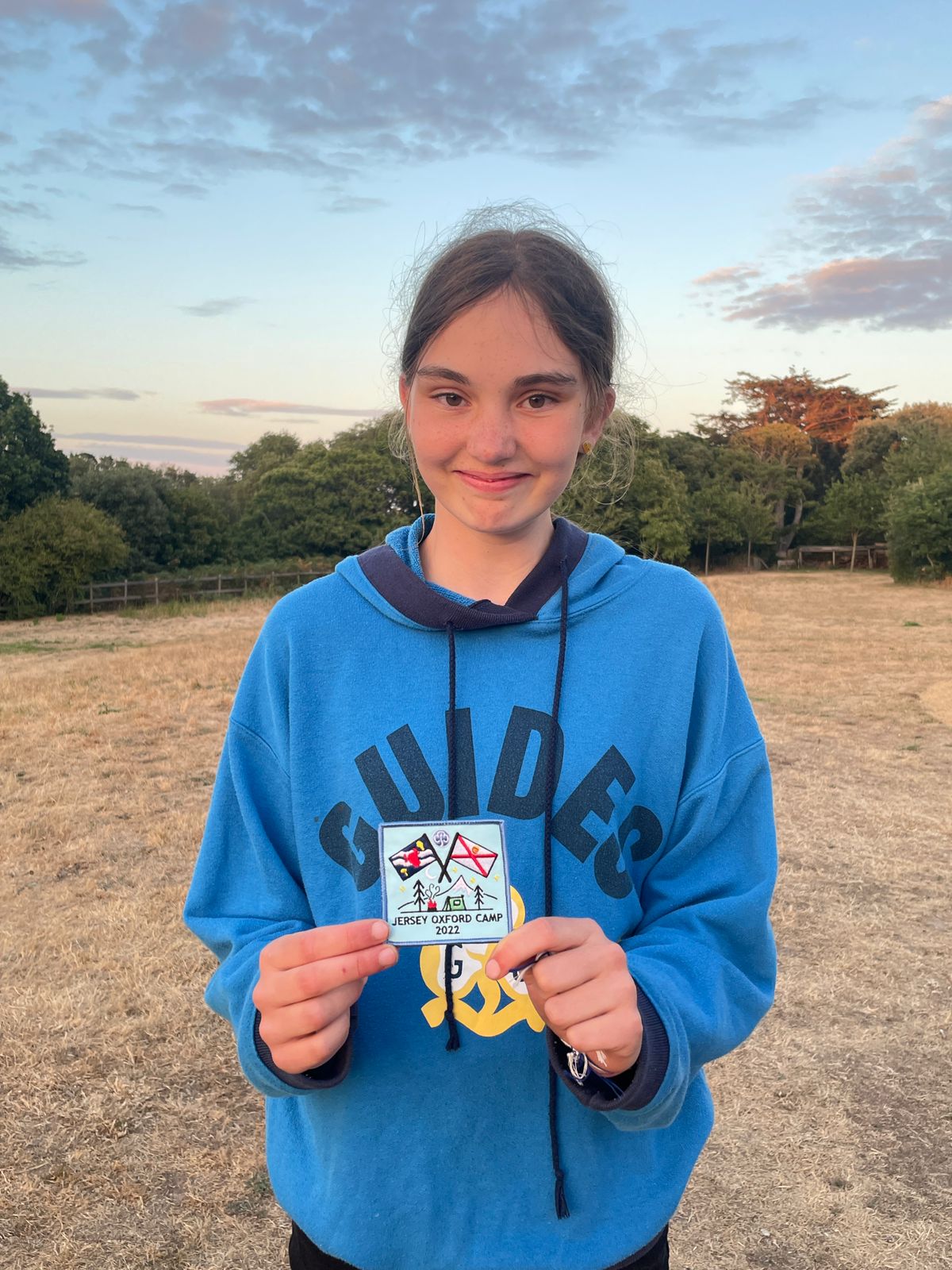 Pictured: Poppy (Jersey) with the badge she designed

Since then, as well as leading their own Guide units, the two friends have taken part in a range of guiding-inspired challenges, including camping outside every month of the year during COVID.

Jenny said: “It was during one of our virtual camps during COVID that we had the great idea of having a joint with both of our Guide units. We thought it would be a fantastic opportunity for the Oxford girls to travel off the mainland, and for the Jersey girls to show off their Island.

“Because we know each other so well we knew we could pull together a team that could compliment our skills, and I’m pleased that we were able to pull off a fantastic camp.”

All the girls who took part in the camp received a badge, which was designed by a member of 16th St Peter’s guides, Poppy le Marinel. Poppy’s original design was turned into a professionally-produced badge, which all the girls will keep.

Caitlin, an Oxford leader said: “It’s been a wonderful week - as a former Guide myself, I’ve spent so much of this week remembering what that experience was like. I loved being a Brownie and a Guide and Ranger: we did so many wonderful things, and have been to so many amazing places. It’s been great to offer that experience to the girls, and I hope they’ll remember this for years to come.”

Charlotte, an Oxford Guide: “I’ve had a really good time and I’d really recommend Jersey to anyone going on camp. I really liked going to the beach because I’ve barely ever been to the beach before, even though there were lots of annoying seagulls!” 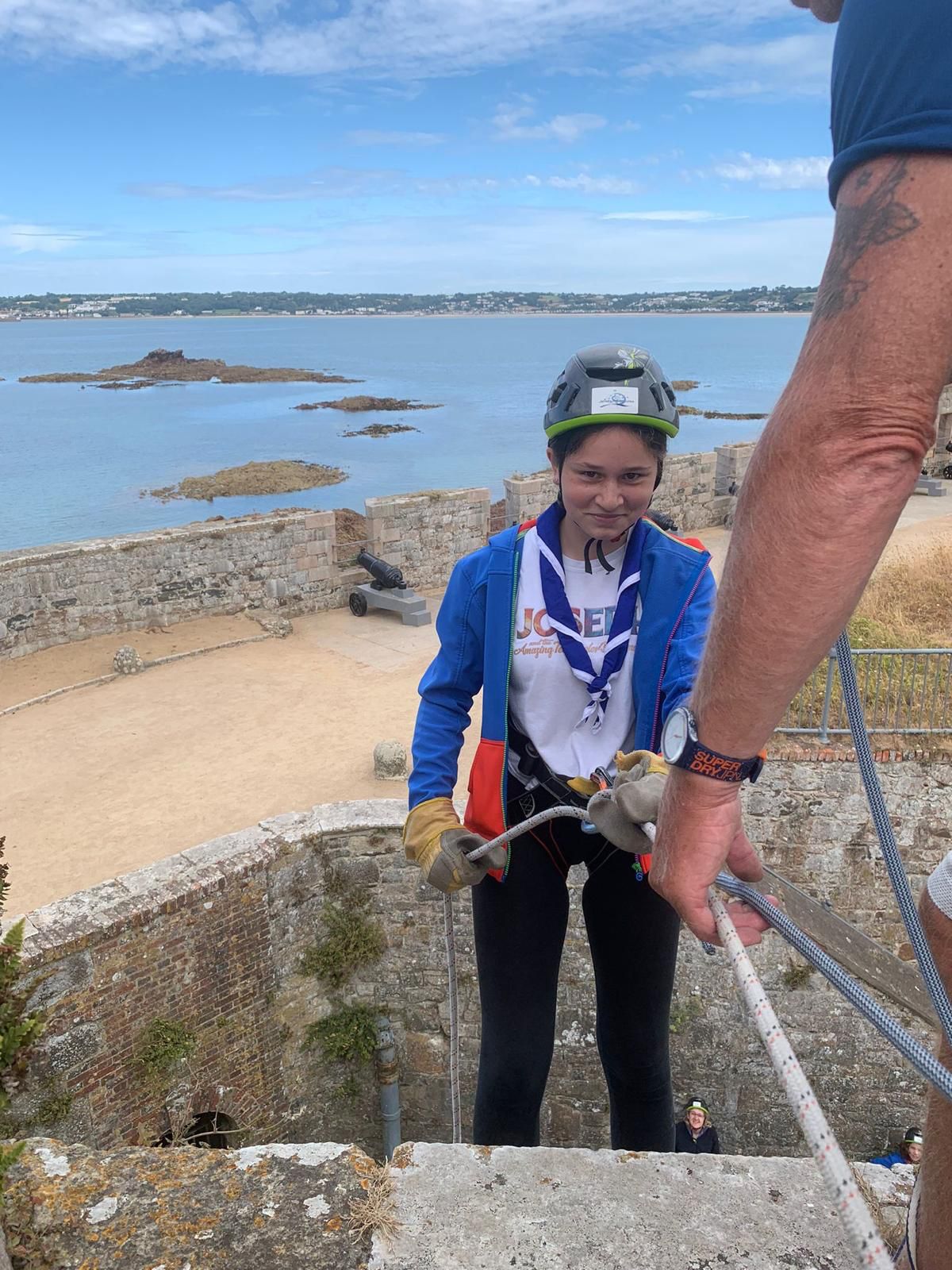 Lexie, a Jersey Guide, said: “I’ve never slept outside before and I’ve never been on a camp, but it’s been really fun because we’ve all learned together and the leaders have helped us all learn.

“I had a really good week because even though I’ve been to lots of the places we visited before, the Jersey girls got to show the Oxford girls all these new places and we did lots of group activities together.”

More information on becoming a volunteer or registering your daughter is available via the Girlguiding website: https://www.girlguiding.org.uk/information-for-parents/register-your-daughter/

Listen: The Well-List #3 from Bailiwick Wellbeing