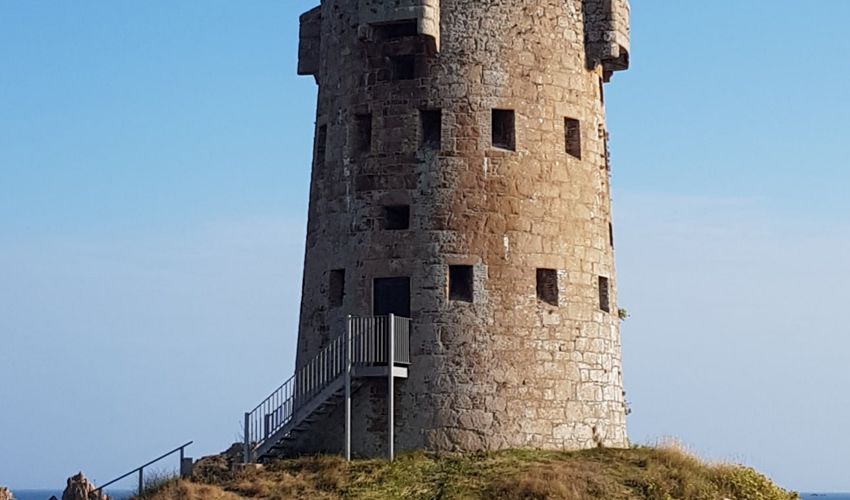 Ian Bromley, Brian Penaluna and Brian Nibbs, all former Merchant Navy officers, are requesting that if they have them, Public Buildings and Parish Halls fly the Red Ensign (or the Jersey Red Ensign) on Saturday 3rd September.

For the past three years, the Red Ensign has been flown from St Clément’s Parish Hall and the nearby Le Hocq Tower (image attached). Households who have a flagpole are invited to follow suit.

The trio are supporting the Bailiff’s Chambers, who are working in tandem with the same objective. It is hoped that by ‘flying the flag’, this will help raise the awareness and importance of British Merchant Seafarers on British registered vessels.

Captain Brian Nibbs, a former Merchant Navy Officer, said: “The Red Ensign is a hall mark of quality, and those sailing under it can be assured of high standards. Anyone who has served in the Merchant Navy is proud to do have done so, and it is pleasing to mark the occasion of Merchant Navy Day on 3 September.”

The title ‘Merchant Navy’ was bestowed in 1919 after King George V recognised the huge sacrifice made by the crews of all the British commercial ships during WW1, around 14,000 men were lost and double that number in WW2. The day of remembrance was granted in 2000 and 3rd of September chosen to mark the sinking of the first British merchant ship by enemy action in WW2, the passenger ship ATHENIA.

Seafarers work aboard a broad range of vessels flying the Red Ensign. These include container vessels, tankers, bulk carriers, cruise liners, ferries and commercial yachts. Over 90% of all imported goods to the UK (and the Channel Islands) are carried by sea and it’s important that as much of this as possible is carried on board British registered vessels.

(On behalf of the three Merchant Navy representatives, mentioned above)