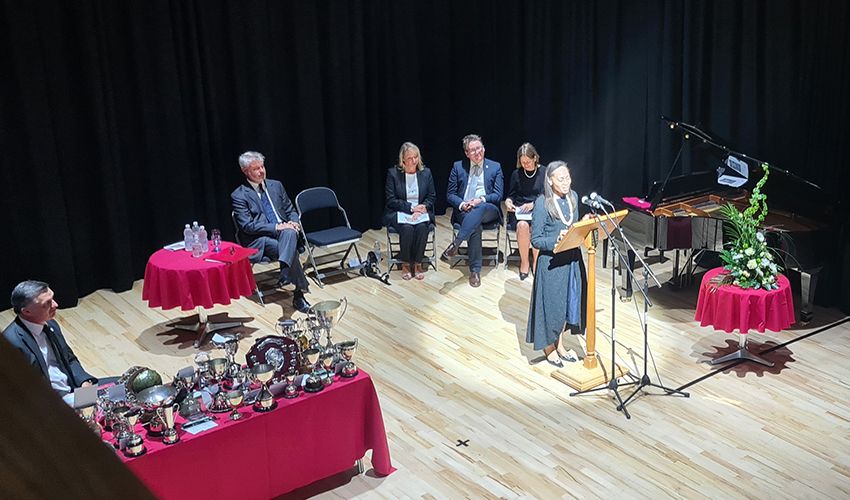 A British lawyer, businesswoman and public figure, Ms Casely-Hayford was awarded a CBE in the Queen’s Honours list for services to charity and for promoting diversity in 2018, at the end of her term as trustee and Chair of international development Charity ActionAid UK.

During her visit, she and her husband Giles Quarm took part in inspiring Q&A sessions with our students.

In her speech, Ms Casely-Hayford praised Her Majesty The Queen as a “feminine and feminist icon” who championed women at every opportunity.

Carl Howarth, Principal, reflected on the past school year, whose abiding theme had been “getting back to something resembling normality”.

“We have been determined to persist and adapt so that our students and staff receive the true JCG experience, or as close as we could get to it at that time,” he said. “We are very aware that for our students, each year is their only year; you are only in Year 7 once and Year 13 is your final experience of the many aspects that make our JCG family. We owe our students nothing less than our best so we were ultra can-do with the mantra of ‘We’ll do it until we are told we can’t’.”

“JCG is a remarkable community, a partnership, a sheer delight to be part of and to be nourished by,” he added. “I would like to thank every single member of this College in whatever role you fulfil for enabling us to provide the very best education of character for our students and our love and care for one another.  I am so fortunate to be a member of possibly the best leadership team of any school and to be guided and challenged by the most compassionate and expert Governing Body led by Louise Read.

“As we look forward to the forthcoming year, our focus is to continue to strengthen our wellbeing.  To be active, to keep learning, to give of ourselves for the benefit of others, to connect, to take notice, to care.  We will be led by the science in fashioning our strategy, we will become a biophilic campus, will continue to challenge discrimination and be activists for a better world.

“But most of all, we will take care of each other for if we achieve what I know we are capable of achieving, we will astound ourselves.”