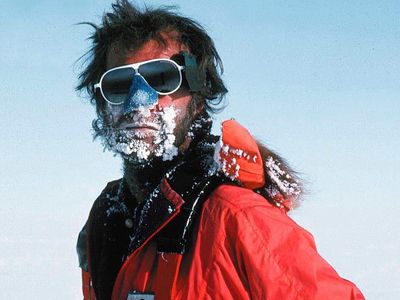 Sir Ranulph Fiennes OBE, named by the Guinness Book of Records as the world’s greatest living explorer, is making his first visit to Guernsey next year.

Sir Ranulph Fiennes OBE, named by the Guinness Book of Records as the world’s greatest living explorer, is making his first visit to Guernsey next year.

For one night only on Thursday 3rd April 2014, he will give islanders the chance of hearing more about his amazing expeditions and phenomenal fundraising efforts. The event, which is being sponsored by Sure, will be held at St James and is set to be a sell-out.

‘Sir Ranulph is without doubt the world’s greatest living explorer but his name is up there with many other explorers from throughout history. His efforts as both an explorer and a fundraiser are beyond comparison and I have no doubt that this will be one of the events not to be missed in 2004,’ said chief executive of Sure Eddie Saints.

‘Sure is delighted to be able to help in bringing such an inspirational man over to the island to entertain the community which we are proud to be a part of.’

Having led 22 major expeditions to some of the most remote parts of the world, including both poles, Sir Ranulph is currently the only man alive to have travelled around the earth’s circumpolar surface.

He was also the first explorer to completely cross the Antarctic continent unsupported, and in 2009, aged 65, climbed to the summit of Mount Everest, the oldest Briton ever to do so.

To date, Sir Ranulph has raised over £14.2 million for UK charities through his expeditions and in 1993 was awarded an OBE for human endeavour and charitable services. He has been named as the UK’s top celebrity fundraiser by JustGiving, after raising more than £2.5 million for Marie Curie Cancer Care over the past two years, which is more than any other celebrity fundraiser featured on JustGiving.com during the same period.

Tickets for the event are available from St James or at www.guernseytickets.gg