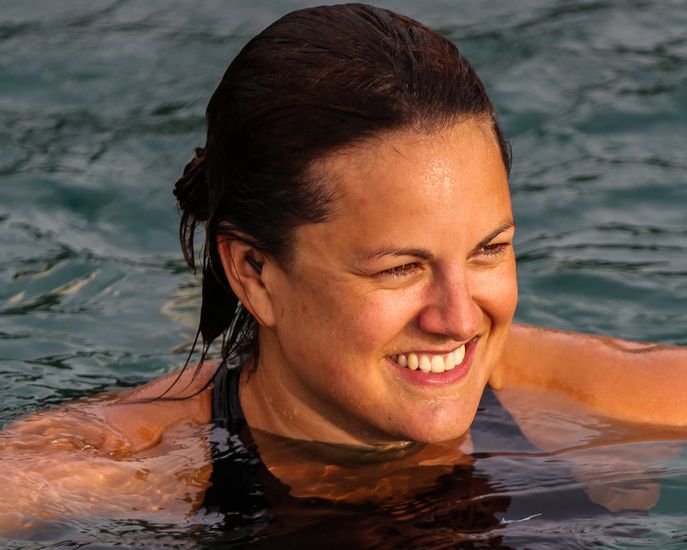 Just days after announcing on social media that she was going to swim the English Channel in memory of her late sister, Sophie Vaudin is overwhelmed at islanders’ generosity.

In one weekend, the 35-year-old has received almost £500 in donations and more than 600 people have ‘liked’ her Facebook page. She’s planning to undertake the challenge in August 2016 and will raise money for three charities, including Lara’s Foundation set up in memory of her sister who was killed while travelling in Cuba in 2012.

‘It’s a huge challenge and it’s so encouraging to have so much support already. Lara had always said that I could swim the Channel and since her death it’s become clear that now is the time to just man-up and do it,’ said Mrs Vaudin, group brand manager at 1st Central – her main sponsor.

The straight-line distance from the White Cliffs of Dover to Cap Griz Nez, France, is about 23 miles. But tidal movement means the actual swim is more likely to be in excess of 30 miles.

Thanks to a £4,000 donation from 1st Central, Mrs Vaudin has been able to employ the services of top open water swimming coach, Dr Julie Bradshaw MBE.
Dr Bradshaw first swam the English Channel at the age of 15 and did it again in 2002 when she broke the record for using the butterfly stroke.

‘Julie has told me that I should be building up to comfortably swimming 40 km a week, roughly the length of the channel swim, by the end of this year. The 40 km should be split between long sea swims, when I need to start feeding while in the water, and anaerobic training sessions including sprints and drills,’ said Mrs Vaudin.

‘Alongside that I will continue to work with Jon Le Tocq on my overall fitness, and strengthening of my arms, shoulders and core. It’s really going to take off from this point, getting to a position of training in one way or another pretty much each day.

‘I am also aiming to swim to Herm and Sark this year as part of my training and have an organised swim of the length of Coniston booked for September. One of the most important parts of the training is getting my body used to being in cold water for long periods of time as wet suits aren’t permitted for the swim. I can’t wait for that!’

Mike Leonard, co-founder and deputy group CEO of 1st Central said: ‘Sophie is very determined and with the help of Dr Bradshaw I have no doubt that she will complete the challenge. 1st Central is delighted to be able to help Sophie do this swim in memory of her sister.’

Mrs Vaudin is also being supported by a number of other island businesses, including: Robus Group, Livingroom, A7 Design, Jon Le Tocq/ Storm Force Fitness and Equilibrium Massage.

She added: ‘I’ve always wanted to swim the English Channel and my first experience of sea swimming – other than paddling around on holiday – was when I did the Castle swim when I first moved to Guernsey about eight years ago. That time it was all a bit of a last minute decision and fuelled by bravado. This will be completely different.

‘As well as Lara’s Foundation l will also be raising funds for the Samaritans, who tirelessly support those in their bleakest moments, and Hope for Guernsey.’