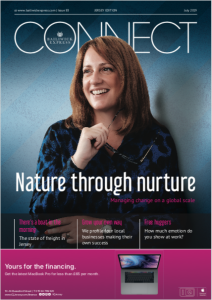 Leadership Jersey hosted a fascinating breakfast event in recent weeks, unpicking the topic of ‘wilful blindness.’ When considering exactly what those words mean, I would suggest you pause if the first image to come to your mind is that of Horatio Nelson at the Battle of Copenhagen, wilfully ignoring an order to retreat by putting his telescope to his blind eye, and missing the crucial signal - before going on to win the battle.

Author Margaret Heffernan had something far more damaging, systemic and pernicious in mind than Nelson’s consummate display of leadership. Equally, for those amongst you who would rather replace the image of a pitching and bloody deck from an early nineteenth century naval battle, with a premiership football touchline in the late 1900’s (stick with this) – ‘wilful blindess’ is rather more than Arsene Wenger’s stock response to any offence committed by one of his Arsenal team: “I didn’t see it,” even delivered with a continental twang, and suitably shifty Gallic shrug.

What Heffernan was explaining was a deep- seated cultural phenomenon, within which we don’t speak out when we see something going wrong; we don’t challenge, we don’t question. We don’t ‘whistleblow,’ we ‘go with the flow’ onthe basis that it’s not sensible to go looking for trouble, and after all, someone else will deal with it. Move along, nothing to see here.

It’s the attitude which sits behind so many of the major corporate disasters of the 20th century, but it’s a mistake to see the concept only in the frame of a missing safeguard; if you think about it, ‘wilful blindness’ also slips into the comfy bed of laziness, where it finds a presumption against change, lying next to a preference not to disrupt.

In many ways, journalism runs directly counter to ‘wilful blindess,’ it is one of the reasons I love it: there is a requirement to be awkward, to ask the uncomfortable questions, and to stick a pin where everyone else prefers a sticking plaster.

But success generally is also very often to be found around those who are confident enough to say ‘no’ in place of ‘yes’ – in this edition of Connect, you can read the story of Dr Lesley Dickie who has made it her mission to reverse the damage being done to the planet’s species (see page 30); or on page 4 we profile four local businesses who weren’t happy with the fashion products on offer, so decided to make their own. Connect is here to keep you informed, so that you have a clear and stimulating window on the business world around you; we hope you act on what you see.