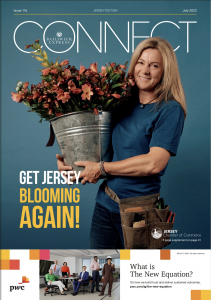 In this edition of Connect, you’ll read substantial contributions from both the IoD and the Chamber of Commerce about how they want Jersey’s new government to support our prosperity.

I’ve chosen that word “prosperity” deliberately - because ultimately, when we talk about the economy, or businesses, that is actually what we really mean. But for some reason, people often fail to make the connection. You can neither cut, nor regulate, your way to prosperity, the process runs the other way entirely. It is NOT a viable plan for Jersey’s future, if it is continually based on doing more with less, on cutting back and making do, with the only growth coming in the bureaucracy around doing business; as a former business partner of mine used to (frequently) say, you should never focus more on keeping the score than actually making the runs.

For the record, this is not an argument in favour of a totally free market with no checks and balances at all; it IS an argument that we need to realise that prosperity creation needs a specific focus; it should be nurtured, fed and celebrated, because without it, we have nothing.

Our new Government will form this month, and naturally, each member will have their personal ‘to do’ lists; I have no issue with that, the act of standing for election itself should mean you have an agenda you want to achieve while in office.

We still have a chance to walk around the problems of tomorrow, if we plot the right course today, and follow it with determination.

The politicians we have just elected have a four-year focus, they have the luxury (which won’t happen again in their term of office) of making medium-term decisions.

Rather than getting sucked into short-term crises, can they focus on some medium-term principles? There’s lots of competition to be that list, depending on your personal priorities.

For me, most problems are easier to solve when there is money coming in. So that’s where to start. How can we stimulate prosperity? How can we give the economy back its mojo, and grow it strongly?

Achieving that still leaves much important work to do. But it also makes finding the solutions to all the other problems possible.