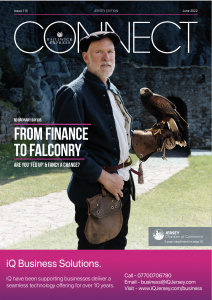 It is one of the many quirks of Jersey life that although we are cupped in the Bay of Mont Saint-Michel, with Normandy and Brittany just a few miles off our eastern and southern shores, we look much further north, to the UK, for the vast majority of our supplies and trade links.

It’s no surprise: we are a British Crown Dependency, a status which derives exactly from our decision in 1204 to look north, and give our allegiance to the English monarch, rather than the French.

Such is the considerable influence of history on modern Jersey life – but, zooming right in on day-to-day living in the first half of 2022, things are getting, well…expensive.

Bucked by the triple kicks of covid, war in Ukraine and Brexit, many in Jersey are taking a look at that life and thinking…”how much?”

Politically, culturally, historically and demographically, we are tied to the UK, and I suspect few would genuinely want that to change. But that doesn’t mean that the current worries about the spiralling cost-of-living can’t become the ‘mother of invention’ – or in this case, provide the impetus to revisit our comfortable assumptions about northern trade always being preferable.

Strengthening our trade links with the massive market right on our seashores has made logical sense for many years, and much good work has been done to do just that; but somehow, so far, it has never reached critical mass, which has genuinely realigned our main supply chains.

Doing so does not need to question our allegiance to the Crown; it does not mean we are any less “British” – it does mean that we are being sensibly pragmatic in how (where) we spend our money, and looking for better ways to make the pounds go further.

After all, we had absolutely no say in Brexit, not one single vote – but its effect smashed onto our shores just the same, just ask anyone who trades with Europe. For Jersey, Brexit has become the classic example of ‘taxation (or in this case, bureaucratic costs) without representation.’

For the avoidance of doubt, I’m not saying we didn’t put our case well in Westminster, and make the very best of a bad hand. And it may be that the true benefits of our negotiations become clear with time.

I’m just making the point that we should have no compunction at all in now looking to France for trade, if we believe that is to Jersey’s benefit, in terms of much shorter supply chains, and the potential to increase choice and reduce costs for the consumer.

One man who certainly thinks so is Brian Murphy, he is now at the heart of work to do just that. Connect interviews him on page 20.

Enjoy reading his thoughts…we may be nearer to France, but are we closer to doing business?