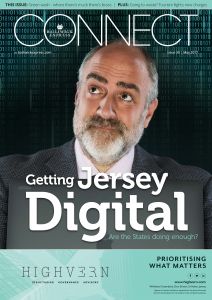 Some people make it sound so easy. Too reliant on Financial Services? Tourism going through a rocky patch? No problem - just invest a few million and grow a digital industry instead, after all, it’s the way the world is going! Right.

And that’s the digital highway we’re currently going down - but with the money spent, and the importance of getting this right, asking how things are going is fair question - but one which still gets quite a sensitive response.

We’re going to look at the progress of the private sector in a later edition, but this month we focus on the States. e-Gov is intrinsically linked to public sector reform, which in itself is crucial to the Island being able to meet the bills for States’ services in the future.

So you might say we all have a vested interest in the success of eGov (getting more States/Parish services online) - the man responsible for reforming the public sector gives us a progress update on page 4, and he is very candid about the successes to date, and the problems slowing it down.

But the key will be to keep a close eye not on the words, but on the actions.

Here at Bailiwick Publishing, we are watching one particular indicator of the States commitment to the digital sector with interest. Last year, the Chief Minister personally committed that the law would be changed by the end of 2016 to stop States Departments, the parishes and private companies being forced to pay hard copy print advertising rates to place a notice in Jersey Gazette. The savings could be in the hundreds of thousand of pounds, and in an Island which was, apparently, committed to going digital, how could such a straightforward change not be made?

At the time of writing in late April 2017, it seems the necessary law change is now imminent, which means that the absolute multitude of laws in Jersey which require the parishes, States Departments, private individuals and local companies to place a notice in the Jersey Gazette will soon (legally) be able to enjoy the lower costs and more flexible distribution offered online.

Now we clearly have an interest in the subject - Bailiwick Express is ready to provide an online Gazette. But notwithstanding that, the subject is a really good indicator of how serious the States truly are about going digital, and how soon.

It will be a series of ‘small’ changes (but which collectively have big effects) such as that which will act as the milestones on the way to Jersey’s digital future.