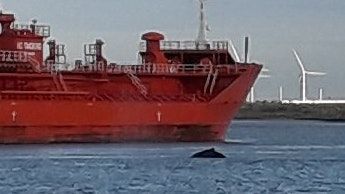 A humpback whale has been spotted in the Thames in an extremely rare London sighting.

Sightings of the animal were reported over the weekend and its presence in the river was confirmed by British Divers Marine Life Rescue (BDMLR) on Sunday.

“We watched it doing normal diving and surfacing behaviour. It is surfacing once every five or six minutes, which is normal.”

A humpback whale was spotted in the English Channel last week, according to BDMLR, but it is not clear whether this is the same one.

While humpback whales are sometimes seen off the British coast further north, Ms Cable said it was “very unusual” for one to be seen within the Thames Estuary.

“It’s very likely that it just made a navigational error,” she added.

In 2006, a northern bottlenose whale was spotted in the Thames in central London.

On that occasion the whale, which was too weak to find its way back out of the river on its own, ultimately died as rescuers attempted to transport it back to sea.

And in 2009 a humpback whale was found washed up on the shore of the Thames in Kent, having seemingly died from starvation.

Ms Cable said there was no indication the whale spotted over the weekend was in any distress and it is hoped it will find its own way out.

She said the animal appears to swimming as far upstream as Woolwich during high tide, then making its way further downstream during low tide. It was seen near Dagenham on Monday morning.

A year ago a beluga whale – which was given the nickname Benny – was spotted swimming in the Thames near Gravesend.

It is thought to have made its own way back out to sea in the new year.