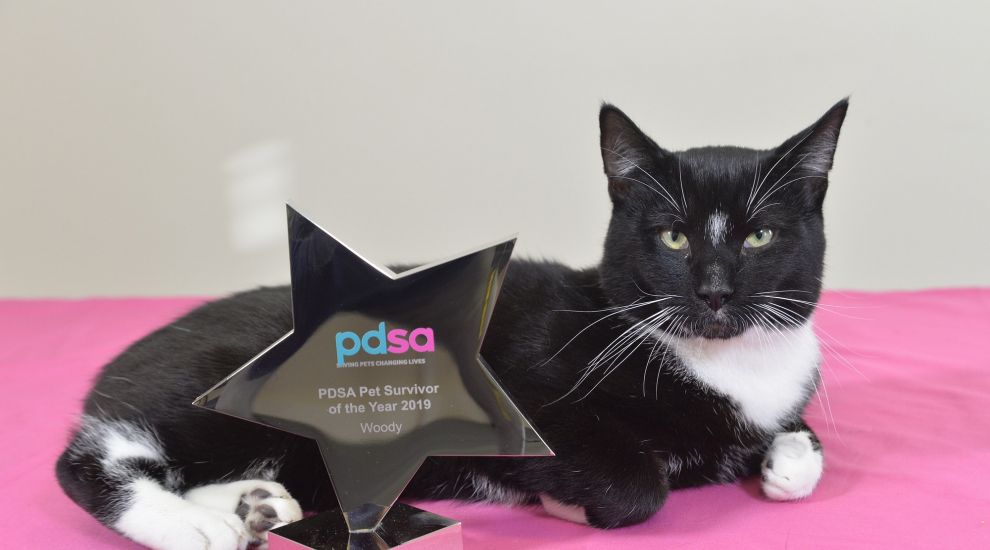 A “miracle kitten” which suffered horrendous injuries including a ripped abdomen and severed tail has been named PDSA Pet Survivor of the Year 2019.

But now the kitten, which lives with the Wood family in Battle, East Sussex, has been picked in a public vote to win the annual award run by the vet charity.

Ms Wood said: “It’s been a tough year for Woody and the whole family, but it’s ended on a high by winning this award. Thankfully the experience hasn’t changed his personality – he’s such a friendly little cat, and will do anything for a cuddle or a treat. We couldn’t imagine life without him.

“Thanks so much to the team at Sussex Coast Vets, to PDSA for recognising our miracle kitten, and to everyone who donated towards his care and voted for him to win.”

PDSA vet nurse Louise Chapman, who presented Woody with his trophy and prize at the PDSA Pet Hospital in Brighton, said: “Woody suffered very severe injuries and it was touch and go whether he would survive.

“But thanks to the skill of his vets and round-the-clock care from his family during months of recovery and rehabilitation, Woody pulled through. He’s a true pet survivor and a worthy winner indeed.”

Woody, who is a “precious companion” for Ms Wood’s son, who has autism, returned home with its injuries last July.

A PDSA spokeswoman said: “When he disappeared for several hours one evening, his family became worried. Later on he suddenly jumped through the living room window, but just sat on the sofa quietly and was eerily calm.

“Stephanie noticed immediately there was something wrong with his paw, but it wasn’t until they went to check him that they noticed his other horrific injuries.

“First they realised that most of his tail was missing, but the stump wasn’t bleeding, it was as if the wound had been cauterised.

“Then they noticed a deep slash on his tummy – and were horrified when they realised they could see his insides. They rushed him straight to the vet, terrified that this was the end for little Woody.”

Woody was taken to private practice Sussex Coast Vets where it underwent eight days in intensive care followed by months of recovery at home.

The spokeswoman said: “He was kept on strict cage rest for three weeks and wore a special medi-jacket to protect his wounds.

“Woody needed further surgery due to an infection, but he seemed determined to survive. Finally, after months of recovery and rehabilitation he’s back to his normal cheeky self, and doesn’t seem to be bothered by his missing tail.”

Ms Wood, who crowdfunded Woody’s treatment, which cost £5,000, said: “We reported it to police and they investigated this as a case of animal mutilation.

“We’d heard of other cats in the area having similar wounds, it was awful to think someone might’ve done this deliberately.”