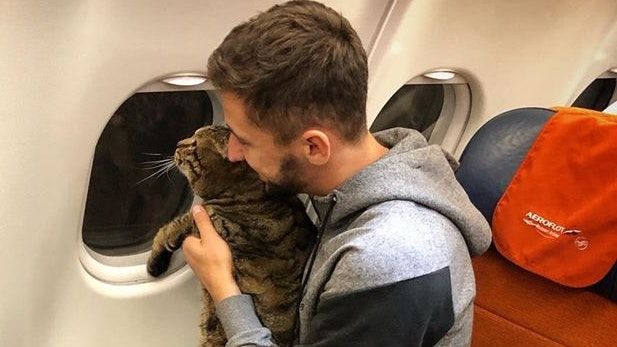 A Russian air passenger has had hundreds of thousands of air miles revoked after he smuggled his overweight cat on board a flight.

Mikhail Galin took his cat Viktor on an Aeroflot flight from Moscow to Riga despite the feline weighing 2kg over the limit, using a decoy cat to fool staff.

Aeroflot rules state cats over 8kg must be kept in the luggage hold so Mr Galin borrowed a cat from a “friend of a friend” in Moscow for checks with staff before swapping them for the 10kg Viktor.

“It was impossible because (Viktor) was feeling really sick,” the 34-year-old from Vladivostok told the PA news agency.

“I really care that he will not survive during this flight.”

After he posted pictures to Facebook of himself and Viktor on the flight two weeks ago, Mr Galin’s story went viral and was shared by news outlets.

“I opened my eyes in the morning it was everywhere in the news – my phone was ringing every minute,” Mr Galin said.

The news stories brought the matter to the attention of the airline and Mr Galin found out in an article that Aeroflot had revoked his air miles – of which he had accrued more than 370,000.

“I think it was my fault because I should follow the rules but I really care about my cat,” he said.

“It was a really big amount of miles but I think they can do it because I wasn’t all right in this case … they can choose the penalty.”

A spokesman for Aeroflot said in a statement: “Following (an) evident breach of air carriage agreement conditions, Aeroflot decided to expel the passenger from (the) Aeroflot Bonus loyalty programme.

“All miles accrued during his participation in the programme will be annulled, his member account will be closed.”