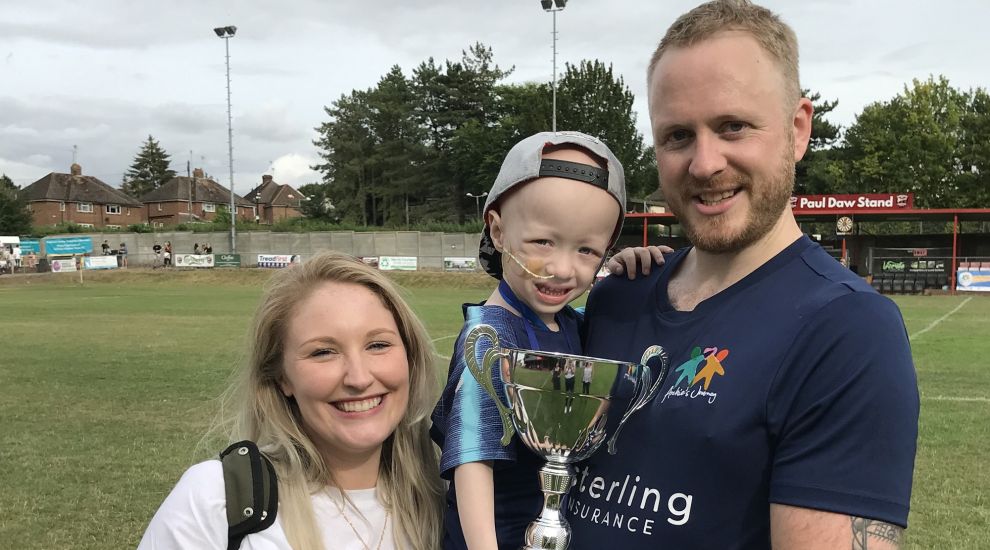 A good-natured clash between two teams of celebrity footballers has raised thousands of pounds to help a three-year-old boy with a rare form of cancer.

Dan Osborne, Jake Quickenden and Matt Lapinskas were among the famous faces playing in the fundraiser for Archie Wilks, from Saffron Walden, Essex, who is being treated for neuroblastoma.

Archie, who is due to have further chemotherapy this week, attended the match with his parents and identical twin brother Henry, who is not affected by neuroblastoma.

Lapinskas, who celebrated scoring a penalty in the first half with a back flip, said: “We are all here raising money for a good cause.

“Archie is the winner here with every goal we score.”

Family and friends are trying to raise £200,000 to take the Tottenham Hotspur fan to Memorial Sloan Kettering Cancer Centre in New York for a trial vaccine treatment, which may prevent the cancer from returning once Archie is in remission.

Archie’s parents, Simon and Harriet Wilks, have been told that almost half of children who successfully complete treatment for neuroblastoma will relapse and, of those whose cancer returns, nine out of 10 will not survive.

Mr Wilks said enabling Archie to try the vaccine treatment would allow his parents to know they had done “everything possible to give Archie the best chance at life”.

More than £80,000 has already been raised and the match at Saffron Walden Town Football Club – which was attended by 1,116 people – boosted the campaign by thousands of pounds.

Quickenden, Kieran Hayler and Cliff Parisi were among the well-known names playing for Archie’s Journey Celebrity FC, with Heavy D from Storage Hunters as the team manager.

They faced Archie’s Celebrity Army XI which was captained by Archie’s father with Neil “Razor” Ruddock as a manager and Lapinskas and Osborne among the squad.

Before the match, Ruddock told PA: “I’m on the sidelines making sure they go through a vigorous warm-up ‘cos I don’t want them getting hurt and embarrassing me.

His tough team talk seemed to work and, with Ruddock’s team winning 7-1 at half time, Heavy D resorted to boosting his side with a couple of extra players.

They were also awarded two penalties, taking the score to 7-3.

But it was not enough and the match ended 8-3 with Archie’s father collecting the trophy.

After the match Heavy D said: “Charity is the biggest winner here. We are here for a good cause, that’s all that matters.

“Everything we do today is for Archie.”