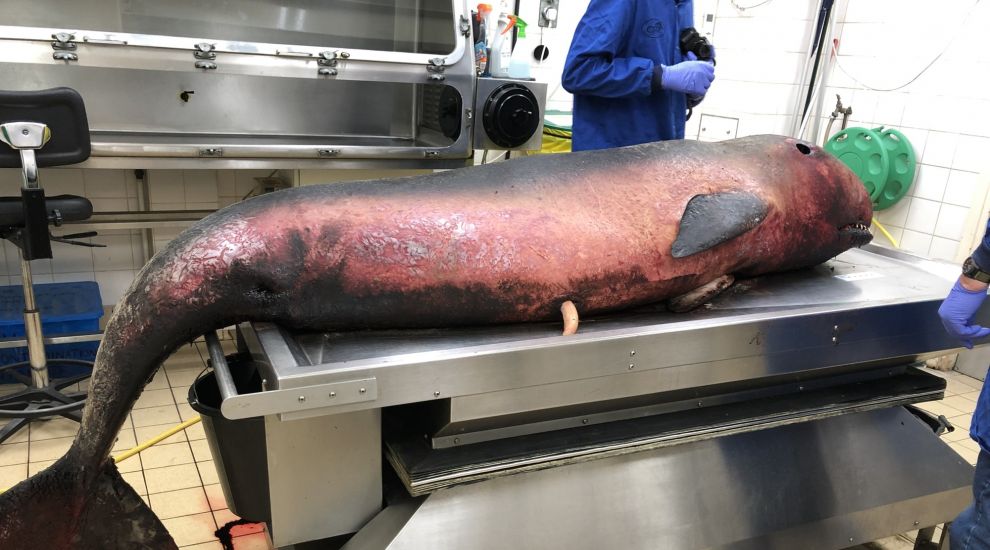 Scientists at London Zoo are investigating after a rare pygmy sperm whale was found washed up on a Welsh beach on Wednesday.

The adult male was found on Pendine Sands in Carmarthenshire, which is owned by the Ministry of Defence and where the general public have only limited access.

The 2.5m long whale is now being analysed by the UK Cetacean Strandings Investigation Programme – dubbed “CSI of the Sea” – at the Zoological Society of London’s (ZSL) Regent’s Park site.

The carcass is only the 14th pygmy whale to be found on the UK’s shores, out of about 16,000 dolphins, porpoises and whales analysed by the CSI programme in its 29-year history.

The last one was stranded more than three years ago.

Little is known about the species’ habits, except that the UK is believed to be at the northern end of its range.

It is also one of only two species of whale to release ink, in this case a thick, red substance created from its faecal matter, to protect itself from predators.

Chinese whalers dubbed it “the Firecracker” because of the explosion of red it emits when chased.

Marine biologist Rob Deaville, head of the Defra-funded CSI, is tasked with dissecting the whale to determine whether it was caused by humans’ impact on the marine environment.

He told the Press Association: “We’re looking at different possibilities – chemical contaminants in the environment, physical pollution such as plastics, noise pollution from shipping and certain offshore industries, bycatch from fishing, or a different cause of death altogether.”

Despite the growing public concern about plastic pollution, the impact on cetaceans in UK waters appears to be low at the moment compared with other parts of the world.

The programme has so far found just one cetacean carcass to have ingested large amounts of plastic waste, although the threat posed by microplastics is one of the research priorities for the CSI team.

Mr Deaville emphasised that plastic waste is still causing big problems for many other marine and coastal species around the British Isles, particularly seabirds.

A much greater risk to whales, dolphins and porpoises is chemical pollution, particularly the damage caused by PCBs, chemicals widely used in the electrical industry until they were banned in 1979.

PCBs take decades to break down, and can gather in ever greater concentrations as they move up the food chain, with devastating consequences.

Mr Deaville said: “There’s a small population of coastal killer whales – we are differentiating offshore and inshore eco types – there’s a coastal group off the coast of Scotland and there’s only eight individuals left in that population.

“We’ve been monitoring them for 30 years and they haven’t had a calf in all that time.

“They’re of the right age and they should be reproducing and they’re not.

“When you measure their blubber levels of PCBs they’re astronomically high – they’re 100 times higher than the threshold where you would start to see some quite significant effects.”

PCBs also cause immunosuppression in cetaceans, leaving them highly vulnerable to disease.

Mr Deaville said: “In western Europe we’re looking at localised extirpation [extinction] of populations probably due to what we did decades ago.”

Bycatch, where cetaceans are killed after accidentally becoming entangled in fishing nets, is also a big problem in UK waters, however the pygmy sperm whale did not show signs of this type of trauma.

Several chunks had been taken out of its tail, but the CSI team think this was more likely to have been caused by a run-in with a shark, while its missing eye was probably the work of hungry birds.

Mr Deaville remarked that dips in the whale’s blubber coverage indicated it was “on the skinny side”, but that because so little is known about the species it is impossible to judge what is normal.

The ultimate cause of death will be determined after the samples gathered during the autopsy have been sent off for full analysis and the findings examined by a vet.

Not all stranding events indicate environmental disaster, and can be evidence of a resurgence in the population of a particular species.

“Since commercial whaling was banned 1980s, the population of humpback whales around the UK has begun to recover so we see more strandings,” Mr Deaville said.

In contrast, the lack of strandings of killer whales is further proof of just how devastating human activity has been on the species.

Mr Deaville said: “We began collecting data on strandings as far back as 1913.

“We had reports of killer whale strandings all around the UK coast, but the last one we dealt with on our patch was in 2001 in Liverpool, and we haven’t seen any since then because there’s just none left.”

Anyone who comes across a dead whale, dolphin or porpoise is urged to contact the CSI programme by visiting UKstrandings.org.

Any live strandings should be reported immediately to the RSPCA.