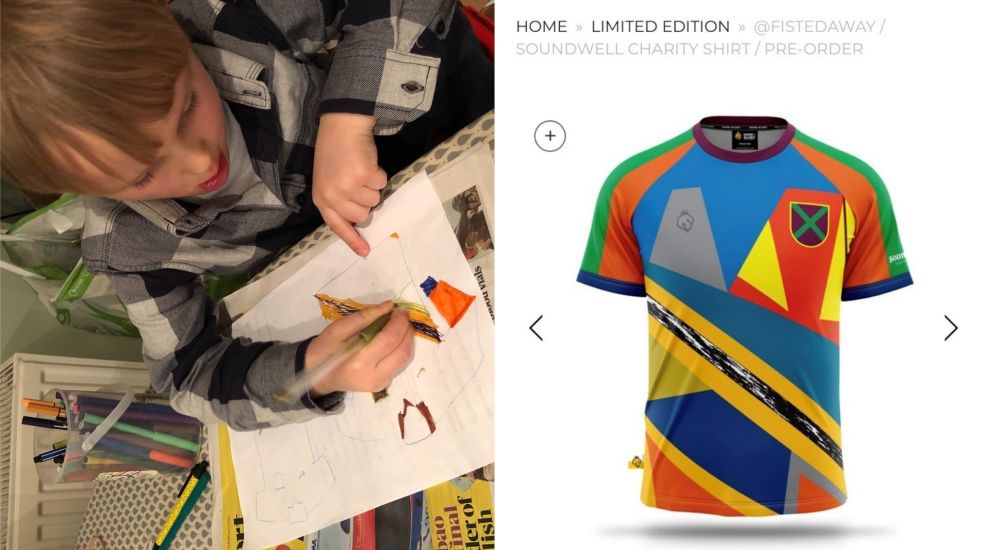 A five-year-old who designed an outrageous football shirt has seen his design come to life thanks to social media.

Nick Dunmore, 36, from Wokingham, Berkshire, was flicking through a book of kits with his son Evan, before suggesting the youngster might like to draw his own.

Jumping at the chance, “possibly just to delay bedtime”, said Mr Dunmore, Evan got to work on his shirt.

“I took a picture halfway through and thought, ‘ah, I see he’s opting for a sash. Very Peru, classic’,” Mr Dunmore told the PA news agency.

“Then (I) came back and saw he’d filled every possible inch with different colours and shapes, gold and silver highlights.

“But somehow it still worked as a kit.”

Indeed, the kit did well among Mr Dunmore’s Twitter followers (“nerds and nostalgists, basically” according to Nick) prompting a designer to produce a 3D version.

Young Evan’s reaction to the 3D kit was to ask if he could buy it, leading Mr Dunmore to “explain what photoshop was” – but not long after, Evan’s prayers were answered.

“One week after the tweet, we were approached by Hope & Glory Sportswear – someone had tagged them into the initial tweet thread,” said Mr Dunmore.

“They suggested running it as a pre-order (to avoid waste) and splitting the profits between Evan and a charity of our choice, which was the key thing for us.

“Having checked H&G out and seen the style of their kits and their eco credentials, and the fact that they supplied CONIFA (Confederation of Independent Football Associations) teams, we knew we’d made the right decision.”

And while Evan is to receive a small cut of the profits as the designer (the vast majority going to Soundwell) his parents are not ready to unleash him into the fashion world just yet.

“Evan’s been blown away by it,” said Mr Dunmore.

“When I told him that over 300 people on the internet liked it he said ‘wow… maybe I should do this all the time?’ but we’re keeping him in school for now.

“I’m obviously really happy about this and a very proud dad.

“I spend an inordinate amount of time thinking about and discussing football kit design choices, so to see him take this and apply it in such a creative, artistic way is really pleasing for me and Emma.”

The shirt can be pre-ordered until March 22 – to take a look, click here.