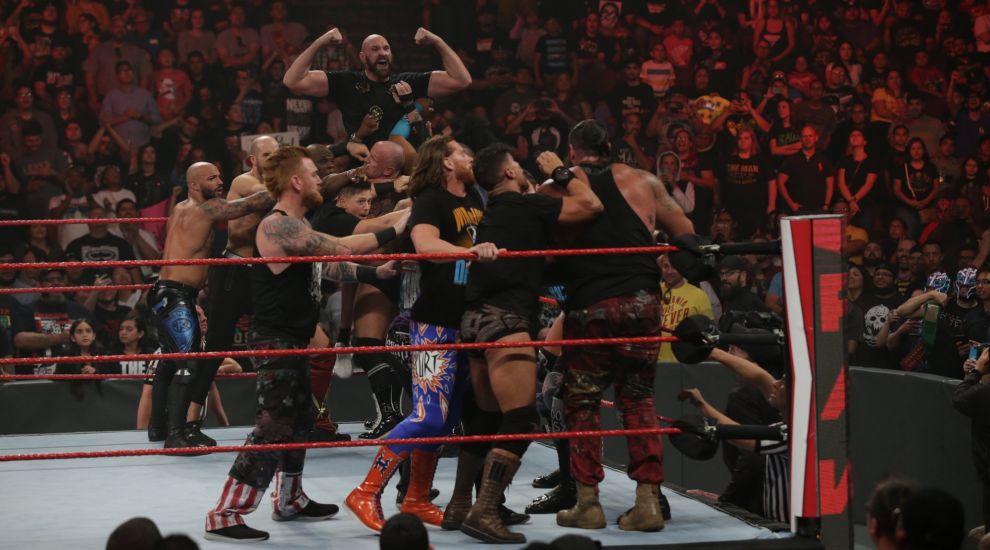 Tyson Fury found himself in a ‘brawl’ with American wrestler Braun Strowman as he stepped into the WWE ring at Monday Night Raw.

The British heavyweight’s appearance in the ring came after he was taunted by Strowman, known as the Monster Among Men, as he sat in the front row at SmackDown on Friday.

On that occasion Fury jumped the security barrier in an attempt to get to Strowman and had to be restrained.

On Monday evening in California the pair met face to face in the ring, with the boxer demanding an apology for the perceived slight.

“It’s a good job that those security did jump on me and take me out because I’d have got in this ring and I would knock you out,” he told Strowman.

The exchange led to a mass melee in which a host of security guards and WWE stars attempted to keep the pair apart – a scuffle that continued even after the televised section of the show had ended.

Some now believe Fury, 31, will make his official WWE debut against Strowman in the pay-per-view Crown Jewel event in Saudi Arabia on October 31.

Undefeated Fury is still recovering from an eye injury that he suffered in his battling victory over relative unknown Otto Wallin in Las Vegas last month, which required around 50 stitches.

His stature in America rose considerably when he achieved a stunning draw against WBC champion Deontay Wilder last December, and the pair are set for a rematch next year.