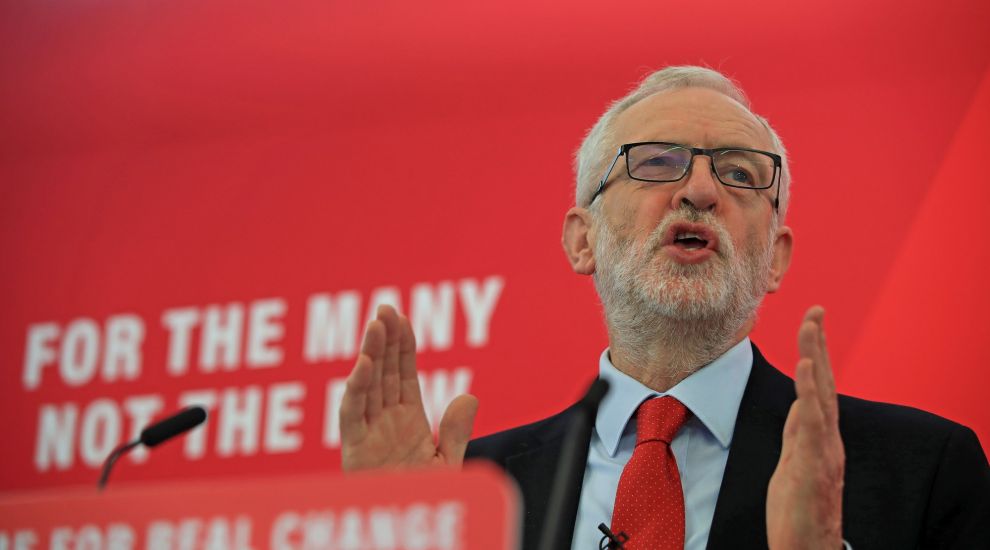 Jeremy Corbyn sent shockwaves through the City as he unveiled plans to nationalise the UK’s broadband network, providing free internet access for every home in the country.

Labour costed the scheme at £20 billion but BT – which would be partly taken back into public ownership – warned the true figure would be closer to £100 billion.

The telecoms giant saw its share price fall 4% on the news – although it later recovered, still wiping more than £200 million off the value of the company.

Boris Johnson said it was a “crazed communist scheme” as the Tories warned it would fall foul of European state aid rules if Labour succeeded in keeping Britain in the EU.

However Mr Corbyn insisted that by providing “gold standard” full-fibre broadband to the entire country, a Labour government would be putting Britain “at the cutting edge of social and economic change”.

“Fast and free broadband for all will fire up our economy, deliver a massive boost to productivity and bring half a million people back into the workforce,” he said in a campaign speech in Lancaster.

“It will help our environment and tackle the climate emergency by reducing the need to commute. And it will make our country fairer, more equal and more democratic.”

The announcement represented the most radical move so far by any of the parties in the General Election race.

The move would bring parts of BT into public ownership, including Openreach which runs the UK’s broadband network.

Labour said it would be paid for through the party’s Green Transformation fund and taxing corporations such as Amazon, Facebook and Google – bringing an monthly saving of £30.30 to the average person.

The party said there would be a one-off capital cost to roll out the full-fibre network of £15.3 billion, in addition to the Government’s existing and not yet spent £5 billion commitment.

Shadow chancellor John McDonnell said the costing was based on the Government’s own review of the UK’s digital infrastructure.

But BT chief executive Philip Jansen said the party had dramatically under-estimated the price of re-nationalisation, saying it would be closer to £100 billion.

He said shareholders were already nursing “massive losses” – with a heavy fall in the share price over the the past two years – and that further losses would only damage confidence in the sector.

“The reason for that is they recognise we’re going to invest very, very heavily in a competitive market and there’s a lot of risk in that investment,” he told the BBC Radio 4 Today programme.

“And change like the current idea of nationalising part of BT, or the infrastructure bill or giving it away for free, takes away that competitive nature.”

Julian David, chief executive of tech trade association techUK, said Labour’s plans would be a “disaster” for the sector.

“Re-nationalisation would immediately halt the investment being driven not just by BT but the growing number of new and innovative companies that compete with BT,” he said.

Richard Hooper, chairman of the Broadband Stakeholder Group, said: “Telecoms businesses in the private sector, many of whom are sponsors of the Broadband Stakeholder Group, are investing at scale to make digital connectivity a reality for communities and businesses across the UK, and to unleash the opportunities that the fastest fibre broadband and 5G will provide for everybody.

“Labour’s national monopoly model would wipe out, at a single blow, the existing and future investment plans, based on vigorous competition, reverse economic growth through years of delay and uncertainty, and cost tens of billions of pounds to the UK’s digital economy.”

The Tories said the plan would “almost certainly be illegal under EU law”.

Brexit Secretary Steve Barclay said: “Jeremy Corbyn is not being straight with the British public – he knows perfectly well that his scheme to keep Britain in the EU means he will be unable to deliver on these grand promises.”

However Mr McDonnell said: “We’ve taken legal advice throughout our approach and on the legal advice we’ve had, which has been extensive, is it’s perfectly compatible.”

Meanwhile Mr Johnson rejected a claim by Nigel Farage that the Conservatives offered peerages to senior Brexit Party figures in an attempt to persuade them not to run candidates in key marginal constituencies.

“Certainly nobody has been offered a peerage, I can tell you that. The Conservative Party doesn’t do deals of this kind. It is just not the way we operate,” he told a BBC Radio 5 Live phone-in.

He also defended the controversial decision to delay publication of the parliamentary Intelligence and Security Committee’s report on Russia until after the election.

He said there was “no evidence” of Russian interference in British politics, adding: “You simply can’t cast aspersions on everybody who comes from a certain country, just because of their nationality.”