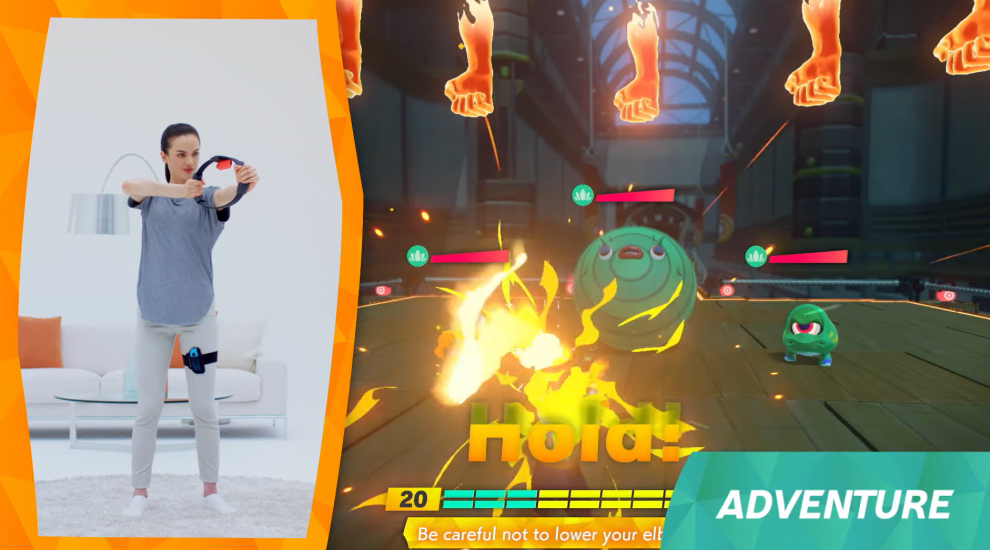 Nintendo has unveiled what its mystery new bendy ring device is for and it is all for a game called Ring Fit Adventure.

The game aims to get players on their feet and moving with Ring-Con and Leg Strap accessories, which work with the two existing controls on the Nintendo Switch console.

Users will not need to press buttons, instead the ring is able to sense and react to movements, turning physical force into powerful attacks against virtual enemies.

The Leg Strap senses movements of the lower body, such as jogging on the spot, which will enable players to move their character forward onscreen.

Squeezing in on the Ring-Con will create a blast of air, while moving it downwards will enable users to jump, for example.

When encountering an enemy in the game, players will need to carry out so-called fit skills to defeat them, such as a squat or a yoga activity.

Nintendo says the devices can be calibrated to match an individual’s own fitness level ability, acting as a natural way to enjoy regular exercise.

Getting in on fitness is not new territory for the Japanese firm, having previously introduced a Wii Fit balance board to its Wii games console.

“It’s in Nintendo’s DNA to keep thinking of new ways to entertain players and put smiles on their faces, and Ring Fit Adventure for Nintendo Switch is a new kind of game where fitness meets adventure,” said Stephan Bole, Nintendo of Europe president.

“I hope that once players hold the Ring-Con, put on the Leg Strap and start playing for themselves, they’ll be immersed in a journey that will keep them motivated to come back and have fun exercising every day.”

In July, Nintendo said that it had sold more than 36.87 million Switch consoles since sales began about two years ago.

The machine was launched in March 2017 to critical acclaim, as the first of its kind that enabled users to play games on its remote screen and then be docked and connected to a TV to continue playing in a home console set-up.

Its success has been credited as being a key part of helping Japanese gaming giant Nintendo return to profitability in recent years.

The new accessory is due for release on October 18, but pricing is yet to be announced.