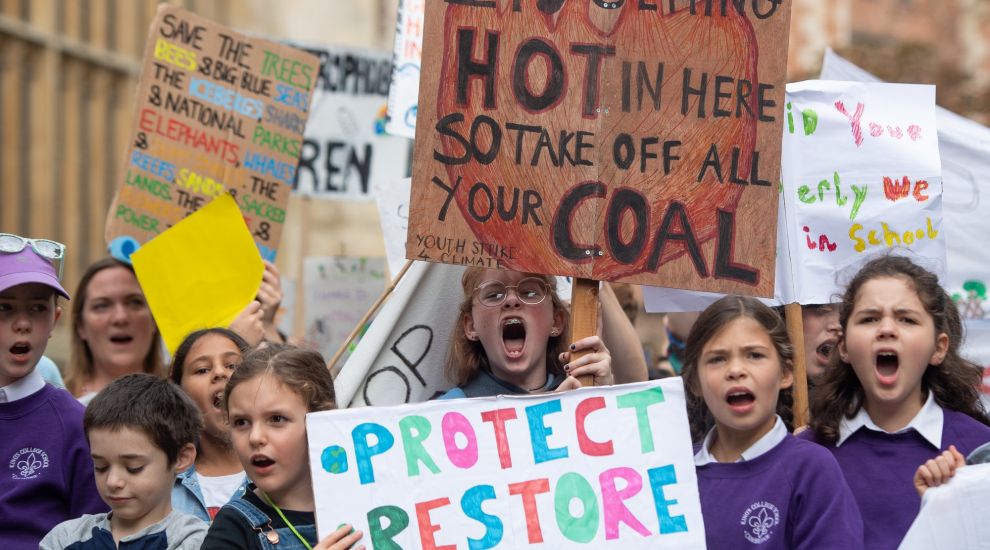 Children take to streets across UK for global climate strike

Children take to streets across UK for global climate strike

People have taken to the streets across the UK as part of  global climate protests which could be the largest in history.

Schoolchildren and students at events from Cornwall to Scotland are being joined by parents, campaigners and workers to demand urgent action on tackling greenhouse gases driving rising global temperatures.

Some of Friday’s first protests were held in Australia, where an estimated 300,000 people gathered at more than 100 rallies calling for action to guard against climate change.

Demonstrations were also being held across parts of Asia, South Africa and in European cities, as part of a movement inspired by teenage activist Greta Thunberg which has snowballed into mass protests around the world.

Business, energy and clean growth minister Kwasi Kwarteng said he could not endorse children leaving school to take part, though he insisted “their voices are being heard” by the Government.

Geoff Barton, general secretary of the Association of School and College Leaders, said: “It is great that young people want to highlight the climate crisis, but we have consistently said that pupils should not miss school to take part in protests and should instead talk to their teachers about activities which can take place in school.”

But other politicians and school leaders have backed the youngsters walking out of school as part of the Youth Strike 4 Climate campaign.

Suzie Longstaff, headmistress of Putney High School, a private girls’ school, said young people should be able to make their own decisions about whether to take part in the action and that she applauded her students for having an environmental and social conscience.

Opposition leader Jeremy Corbyn, who was set to address a climate rally in Westminster, backed the “inspirational” young people who are “leading by example” and “educating us” about the climate crisis and species extinction.

London mayor Sadiq Khan said he was “standing in solidarity” with the strikers and was encouraging City Hall staff to take time out of their day to observe the strike, as he called for more action from Government.

Some companies were actively helping staff take part by closing stores and offices, including Patagonia and Ben & Jerry’s, whose sign on their central London shop on Wardour Street read: “Gone striking. Because ya know, the planet.”

As protests got under way across the UK, the Metropolitan Police said two adults had been arrested on The Strand in central London – where XR Universities, an Extinction Rebellion group are holding a protest – in breach of an order dictating protesters must gather in a specific place in Westminster.

The police urged everyone attending the climate strike to go to Millbank, “where in conjunction with the organisers we have created a safe space for protest”.

The protests come ahead of a climate summit at the UN next week convened by secretary-general Antonio Guterres to urge countries to up their climate efforts.

Much steeper measures are needed across the globe to prevent temperature rises of more than 1.5C (2.7F) or 2C (3.6F) to avoid the worst impacts of climate change.

As if to underline the urgency of the issue, the mercury is set to hit 26C (78.8F) in parts of Britain this weekend – 8C above the average for the time of year.

The UK Student Climate Network (UKSCN) says more than 200 events are taking place across the UK, with, for the first time, adults being encouraged to join the youngsters as they strike.

Strikes are taking place in cities including Cambridge, Birmingham, Belfast and Edinburgh, with students letting off alarm bells at 1pm to “raise the alarm” for the climate.

UKSCN is calling on politicians to bring in a “Green New Deal” to cut the UK’s emissions to zero and improve lives, changes to education to equip youngsters to deal with the climate crisis, and votes at 16 to give them a voice.

Among the many trade unions throwing their weight behind the strikes are the TUC Congress, the University and College Union and Unite, while environmental campaigners, aid agencies and faith groups are joining the protests.