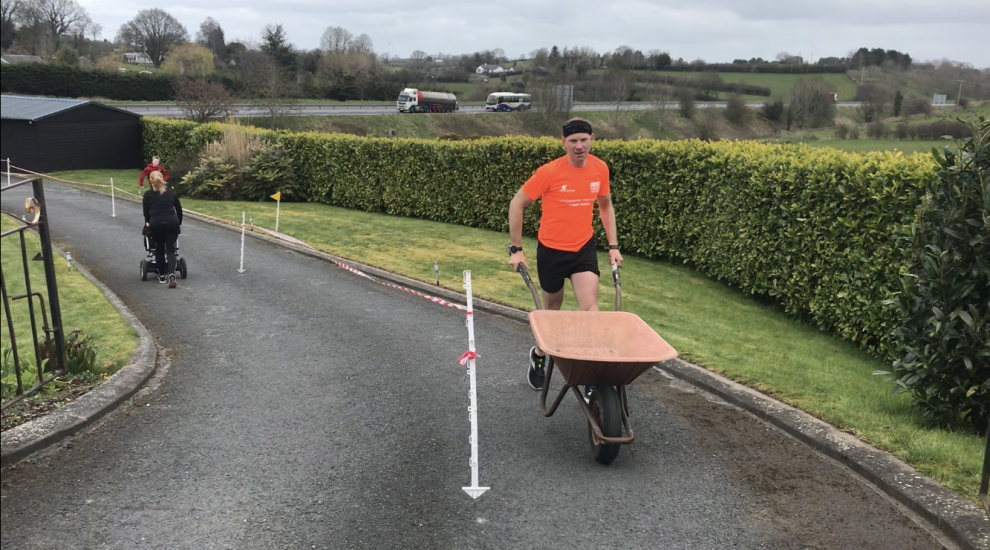 A Co Tyrone man has run a marathon in his driveway while pushing a wheelbarrow to raise money for the NHS.

Keith Clarke from Dungannon described the feat as “run the drive to stay alive” as he started running on Monday morning.

He had raised £1,700 overnight before starting his 416 laps which took him some five-and-a-half hours to complete.

The personal trainer and kettle bell instructor was inspired to run the 26.2 miles up and down his driveway to raise money for the Intensive Care Society in its fight against Covid-19.

Keith told the PA news agency: “I saw a few people on social media doing a few runs in their garden and I know we’re not allowed out of our homes so I thought, I’ve a bit of a driveway here and I’ve done a few challenges, so I thought now is a good time as any.

“I’ll hopefully inspire a few people to go and do some running themselves.

Keith, who enjoys challenging runs, has completed a couple of marathons while pushing the wheelbarrow as well as running the Dublin marathon backwards.

“I’m very pleased about that,” he added.

“We’ve a lot of friends and family supporting us.

“I’ve had to close my gym so this is keeping me active. My clients are staying active and running up and down their driveways too.

“I want to try and help the NHS as much as we can.

“It’s unforeseen times and I know everybody needs a lot of money.

“I just can’t believe how much I have raised and how people have been donating. I know it’s hard times at the moment, especially people off work.

“I’m chuffed to bits and the wheelbarrow added a bit of craic to it.

“It shows you don’t have to go far to raise money. You just have to get your head right, that’s all you need to do. You will quickly clock up a few miles.”

Keith was supported by his wife Cynthia Clarke and their children, Lance, 11, eight-year-old Madison and seven-month-old Brooklyn.

Donations to the Intensive Care Society can be found at the link:
https://www.justgiving.com/fundraising/keith-clarke8?fbclid=IwAR3rnha_tUghM3-WqrLKSDXZfhLjxLyL_Qvp0hjn8DRNoAj4cmfIcEsDyDI