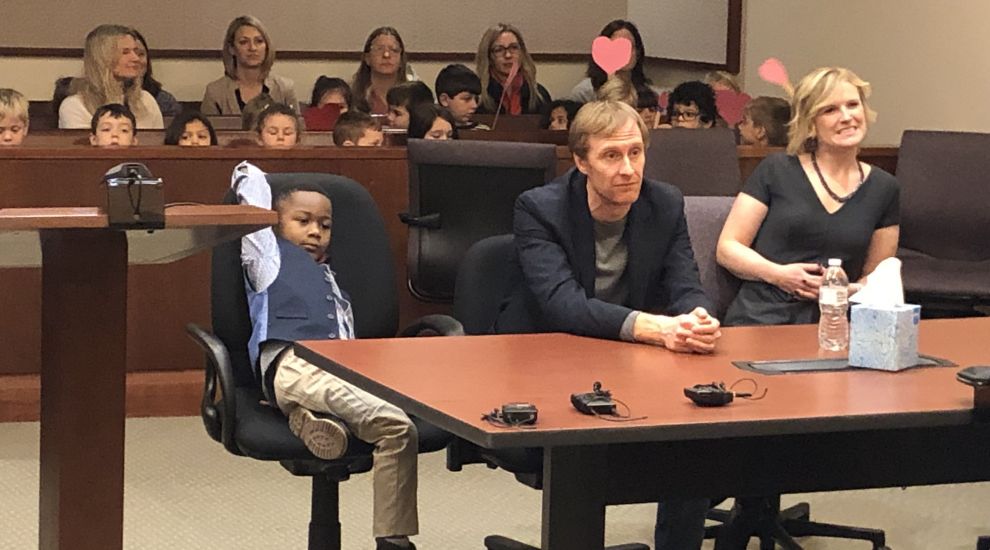 A young boy being officially adopted in the United States took his whole nursery class to the courtroom with him.

Five-year-old Michael Clark Jr was at a court in Grand Rapids, Michigan, on Thursday to be officially adopted by his fosters parents, David Eaton and Andrea Melvin.

Pictures released by Kent County show Michael’s class from Wealthy Elementary School sitting behind him in the public gallery, lending moral support and waving paper hearts in the air.

At one point in the proceedings the judge, Patricia Gardner, invited the classmates to tell the court what Michael meant to them.

One boy named Steven said: “Michael’s my best friend,” while a girl added: “My name is Lily and I love Michael.”

Mrs McKee said in court: “We began the school year as a family. Family doesn’t have to be DNA, because family is support and love.”

According to CNN, Mr Eaton and Ms Melvin fostered Michael for a year before adopting him.

The trio banged the judge’s gavel together to make the adoption official, accompanied by cheers from the pupils in the gallery.

As his new father was being interviewed by a TV station after the process was complete, Michael interrupted to say: “I love my daddy.”

The heartwarming spectacle happened on Kent County’s annual Adoption Day, during which 37 children were “lovingly and officially welcomed by their families”, according to a Facebook post by the county.

An image posted of Michael and his class by Kent County had been shared more than 100,000 times by Friday afternoon.