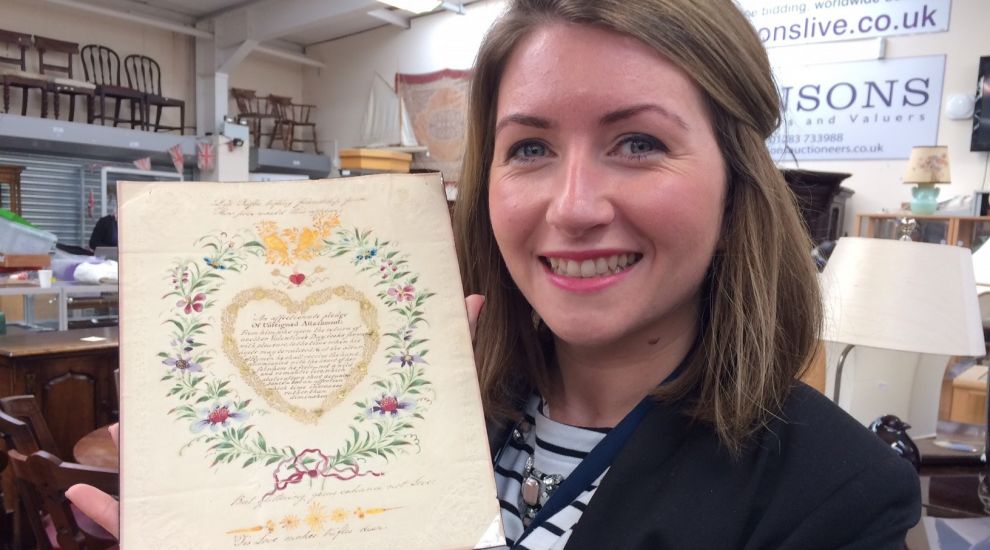 Georgian Valentine’s letter that ‘worked its magic’ sells for £1,300

Georgian Valentine’s letter that ‘worked its magic’ sells for £1,300

A 202-year-old Valentine’s letter that almost certainly led a love-struck Brummie to win the heart of a London girl has sold at auction.

Auctioneers were confident interest would be high after amateur research revealed the letter, sent less than three years after the Battle of Waterloo, may have had the desired effect.

In a romantic tale worthy of a Jane Austen novel, an amateur historian discovered a marriage between a couple matching the names and details of the sender and recipient.

The paper was titled An Affectionate Pledge of Unfeigned Attachment.

It read: “From him who upon the return of another Valentine’s Day, looks forward with pleasure to the time when his hopes may be realised.

“And at the altar of Hymen (Greek god of marriage) he shall receive the hand accompanied with the heart of her for whom he feels – not a wild and romantic love, which abates after a short acquaintance – but an affection which time increases rather than diminishes.”

On first reading the story of how the letter was coming up for auction, 76-year-old Brenda Piper set about discovering more about the couple.

The retired legal secretary, from Wanstead, east London, then contacted the auctioneers, Hansons in Derbyshire, with her findings.

Ms Piper, who has been doing ancestry research since the 1960s, said: “When I saw there was a name and address in an area of London I knew well, I couldn’t resist seeing if I could find her.

“I thought that perhaps having an idea of the couple involved would add extra interest for whoever bought the card.

“I looked for the marriage of Miss L Shafe and found Miss Lydia Shafe, who married Edmundus Burn at St Leonard’s Church, Shoreditch, on December 28, 1819.

“The witnesses were Mary Burn and Clifford Elisha, possibly the church verger.

“Edmundus was a stationer and bookbinder from Birmingham, while Lydia was from Shoreditch in London.”

She added: “They went to live in Brighton and had five children.”

The lot was sold at Hansons auctioneers in Etwall, Derbyshire, on Friday.

Jim Spencer, Hansons’ Works on Paper specialist, said: “Admitting you don’t feel a wild, romantic love could have been construed as a dangerous move.

“But as the Valentine was sent in 1818 and Lydia Shafe married in 1819 there’s a very good chance his message worked its magic.”

The letter’s owner of the past 20 years, Gavin Littaur, from London, had kept the Valentine carefully stored in an album, protecting it from sunlight.

He said: “I’m a bit of a romantic and just talking about this Valentine rekindles my love for it.

“It’s beautiful – exceptionally so, in fact.

“One of the reasons I’m selling it now is to show the collecting world what an outstanding early Valentine really looks like.”

He cannot remember what he paid for the letter, but said it was expensive.