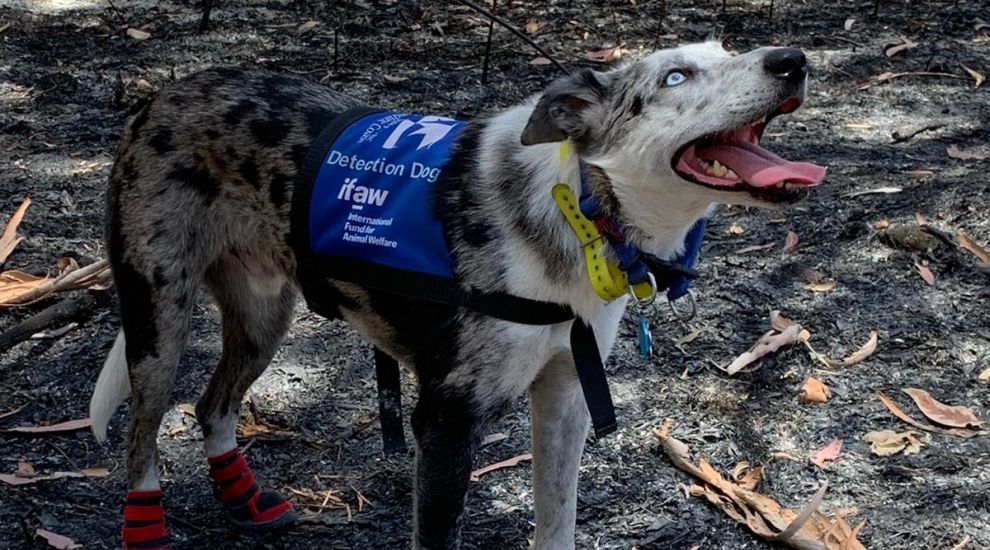 Koala-detection dog helping to sniff out victims of Australia bushfires

Koala-detection dog helping to sniff out victims of Australia bushfires

A dog named Bear has been helping to save injured koalas following devastating bushfires in Australia.

Wearing socks to protect his paws, he is sent into safe burnt-out areas to sniff out koala faeces and fur.

When he smells a koala, he sits very still to alert his handler that an animal is nearby.

Bear is a rescue dog, given up by his former owners as he was not well suited to life as a pet because he was intelligent and highly energetic.

He now works as a koala detection dog for the International Fund for Animal Welfare (IFAW) alongside his handler, Rianna, from the University of the Sunshine Coast’s Detection Dogs for Conservation.

The pair joined a search and rescue effort in the Northern Rivers region of New South Wales, working alongside Friends Of The Koala.

The teams searched an Indigenous Protected Area, Ngunya Jargoon, near Wardell, which has been devastated by two fires in the past month.

The conditions were against Bear, with strong winds making it hard to pinpoint exact locations, but he indicated koalas present at a number of sites, meaning there are still live animals in the area.

The team will now continue the search.

“With such an intense start to the bushfire season, it will be many weeks and months before some of these fires are out. All the while, wildlife will continue to need to be rescued and treated and may remain in care for some time.

“The road to recovery will be long. The impact on local communities will be felt for many months, and the toll on native wildlife and critical habitat will never truly be known.