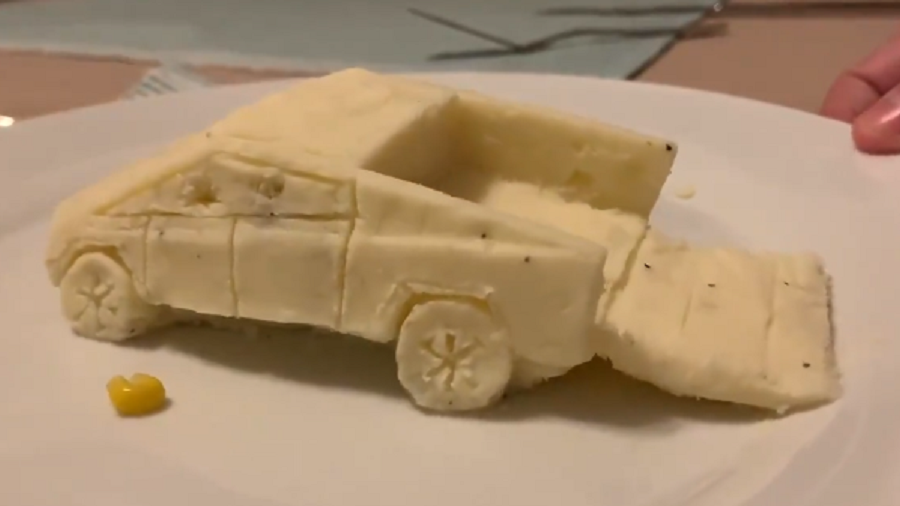 Video producer Dan Milano from Connecticut revealed that his brother Greg had spent hours over Thanksgiving creating a perfect model of the truck, known as CyberTruck.

Posting videos of the Tesla-themed work-in-progress, Mr Milano tweeted: “My brother has been working on a mashed potato Cybertruck for over an hour.”

Mr Milano told the PA news agency: “Greg came to me with a short list of what he might carve this year, he’s been carving Thanksgiving ‘mash-terpieces’ for more than a decade now. The Titanic, the Great Wall of China, and the CyberTruck were listed. I told him he had to do that truck.

“People love a good ‘mash’-up and this took two hot topics and blended them unexpectedly. Tesla and leftovers. Plus the little details leave a lot to be discussed.

“Not many people are known for mashed potato sculptures, it’s a mostly unexplored medium.”

The unveiling of the Tesla pickup truck at SpaceX headquarters in November was marred by its supposedly “shatterproof” windows breaking during a demonstration.

Wanting to achieve true likeness to the truck, Mr Milano tweeted: “The windows have been mashed, by popular request.”

Mr Milano said that Greg, who has a background in art and architectural history, had made potato models of everything from Stonehenge to Lego characters for 15 years with little recognition.

He told PA: “We’ve shared Greg’s Thanksgiving art before and it took more than 15 years for it to take off.

“Never give up doing the things that scratch that creative itch and make you happy.”