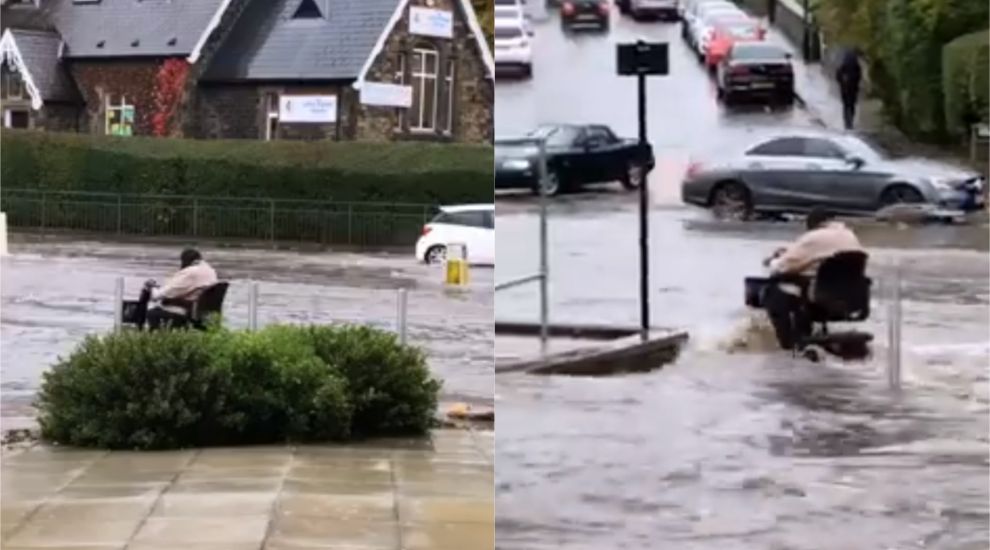 Footage of an older woman on a mobility scooter braving the severe flooding in the north of England has taken the internet by storm.

Stephanie Jubb captured the moment the driver of the electric assistance vehicle ploughed into deep water on Chesterfield Road in Woodseats, Sheffield.

The 25-year-old said she captured the moment by chance after the woman drove past while she was filming the floodwater on Thursday.

“She didn’t even lift her legs up or anything.”

After a trip to the shops the woman later returned via the same route, driving back through the flooding.

“She’s come back through it with her shopping bags, but we didn’t get that on tape,” Ms Jubb said.

The pharmacy dispenser said she “could not believe” the clip had gone viral, but added she felt the moment illustrated “northern spirit”.

“The people up north are quite strong,” Ms Jubb added.

“They just carry on doing their daily thing.”

Meanwhile, in Matlock, Derbyshire, 25-year-old Beth Windle shared images of ducks sat on the arms of submerged benches and swimming up to nibble at bushes now within their reach at her local park.

“The flooding is the most severe that I’ve known it, in my 25 years living here,” the illustrator told the PA news agency.

In a later tweet she posted: “Update on the ducks…it’s their home now.”

In Lincoln, Chelsea Foster said she was “shocked” to see swans swim up to the wall at the bottom of her garden from an overflowing River Witham.

“I didn’t realise how high the water actually was until I went out and there was a group of them right next to my wall, they were that close I could touch them,” the 23-year-old told PA.

“Outside my wall we had a little island area where we could sit and feed the ducks, now you can’t even see it.”