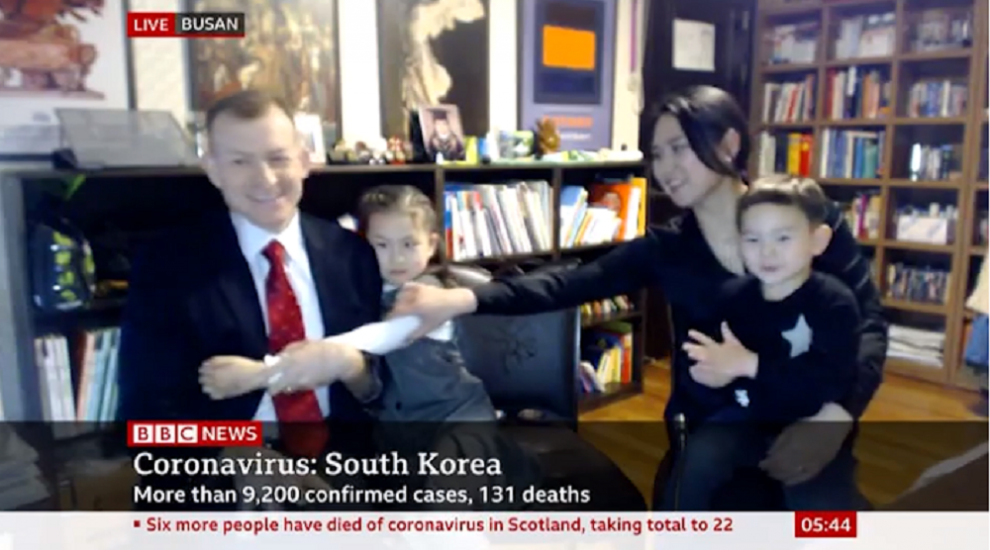 Uplifting news: Birthday singalong in neighbourhood and the return of ‘BBC Dad’

Uplifting news: Birthday singalong in neighbourhood and the return of ‘BBC Dad’

EastEnders’ Lorraine Stanley organised a birthday singalong for her neighbour, and viral “BBC Dad” Robert E Kelly returned to the channel with his family in Thursday’s news.

Here is a look at some of the day’s more uplifting stories you might have missed.

EastEnders actress Lorraine Stanley coordinated a street sing-song for her 95-year-old neighbour as they self-isolated at home.

Stanley, who plays the character Karen Taylor in the BBC soap opera, reached out to other residents to organise the surprise.

In a video posted to Twitter, friends from the neighbourhood can be seen standing outside their homes and singing Happy Birthday as the birthday boy, who is called Allen, emerged from his property.

Stanley held up a birthday message as the tune to the song played from a car.

A family that went viral on social media after two young children interrupted a live interview on the BBC have returned to the channel.

Professor Robert E Kelly was appearing on the news channel in 2017 from his home in South Korea when son James and daughter Marion barged in and stole the show in the background.

On Thursday, he was joined by his wife Jung-a Kim and their children for another BBC World appearance live from Busan to discuss how they are coping with life in isolation.

His yoga teacher wife told the BBC: “It’s very difficult to stay in the house for a very long time so we go out for a very short time to the playground, try to stay far away from the people and a couple of times a week we hike the hills.

“This is spring time in Korea so we try to see the flowers and trees and they can shout and scream.”

Animals at a zoo that has temporarily closed because of the coronavirus outbreak have been enjoying themselves in the sunshine.

Bristol Zoo Gardens and the Wild Place Project closed to visitors last week but the staff have remained to ensure the animals continue to receive the best care.

Lynsey Bugg, curator of mammals at the zoo, said: “It’s certainly very strange not having our visitors here, we only usually close on Christmas Day, so it’s rather surreal.

“However, I’m very pleased to say that the animals are doing well and are enjoying this sunshine.”

– A generous Londoner donated her books to self-isolating neighbours

A woman has been using her daily exercise allowance to cycle around her neighbourhood donating old books.

Actor Stella von Koskull has been delivering books from her own collection around Putney, Barnes and Fulham, to neighbours who are self-isolating.

She said: “I’ve only done a few deliveries so far, but people love it and I think people are craving any kind of social interaction.

“One positive thing that can come out of this is that communities can come together.

“Hopefully I’m serving it in my little way and will inspire people to do the same thing.”

– NHS volunteers target raised to 750,000 after half-a-million offered to help

Downing Street has raised the target for volunteers to help vulnerable people through the coronavirus crisis to 750,000 after more than half-a-million responded to the call.

The Government launched an appeal on Tuesday for 250,000 people to help those self-isolating for the next 12 weeks – but more than double the number had signed up two days later.

People are being sought to help deliver shopping and medication to those in need, transport patients and NHS equipment, or check-in and chat on the phone with individuals at risk of loneliness as a result of self-isolation.

The Prime Minister praised those who had volunteered during his daily press conference on Wednesday.

Speaking from Number 10, Boris Johnson offered the then-405,000 who had signed up a “special thank you”.