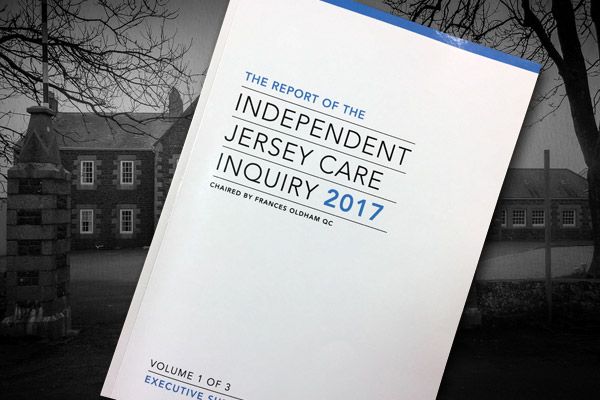 An exceptionally damning report into the way Jersey looked after children in state care has warned that in some cases they are "still at risk," even today.

The long-awaited report of the Independent Jersey Care inquiry was published this afternoon, after a three-year investigation into serious failings in the childcare and fostering system from the 1940s to 2010s.

Often abuse wasn't reported or followed up, for fear of damaging reputations.

The report recommends that Haut de la Garenne, a children's home for many years, and the focus of the police investigation which sparked this enquiry, should be demolished.

It says that Jersey children became trapped in care systems where they endured physical, sexual and emotional abuse and where their voices were left unheard by authority figures after being removed from their families for offences as minor as being “rude and cheeky."

During a period of more than 50 years, many children were repeatedly and unlawfully plucked from their families and placed in care homes and fostering arrangements, where they were subject to strict discipline including physical reprimands and abuse not seen in other jurisdictions, which were subject to little to no scrutiny or investigation from outsiders.

The Panel found that small misdemeanours including “petty pilfering” and being “rude and cheeky” could be enough to land a child in a care institution. Les Chênes, a residential home with a remand function opened in 1979, for example, was found to house children responsible for offences that other jurisdictions claimed would not merit a custodial sentence. Those living in the home for welfare reasons were found to be treated no differently than those guilty of offences. “They were, in effect, serving sentences at Les Chênes,” the report noted.

Social divisions and the shortage of housing in Jersey were also found to have caused struggles for families with children, who had no formal assistance mechanism until the 1980s. But when those parents sought help from the Parish, they were subject to the whim and “judgement” of the Connétable, who had the ability to throw children in care at will, given a lack of statute for preventative child care. This was noted in 1981, but, 36 years later, there’s still no provision.

Moreover, once children were in the system, there was little to no way out, as there was no system in place to reunite children with their families or adequately reintroduce them back into society. They were, the report noted, “abandoned” - only to later succumb to “exploitation, addiction, crime and depression”, which were in many cases the tragic consequences of the mistreatment they suffered.

Abuse was wide-ranging, long-lasting and harrowing. La Preference, which was run by the Vegetarian Society from 1951 to 1984, saw children forced to adopt a vegetarian lifestyle of suffer punishment for eating meat products. One pair of family carers washed children’s mouths out with soap and subjected them to brutal beatings.

The use of “detention rooms” were also found to be used “routinely and excessively” during care experience of many throughout the period - even though they were, “…not used in other Western nations, save for the most serious of circumstances.”

Even child labour was raised as an issue. Some of the youngest residents staying at Sacré Coeur, which ran for 70 years without inspection despite subjecting children to “physical, frightening and humiliating punishments for breaking rules”, helped with garment-making at the Summerland factory.

The infamous Haut de la Garenne, which remained open until the late 80s, saw child-on-child abuse go on behind its doors with poorly-trained staff unable to handle concerns. More damningly, however, the report found that those same staff did not inform children’s parents after nearby resident Henry Fleming was discovered to have plied children with cigarettes and alcohol and engaged in sexual activity with him for a period of two to three years in the 70s. The motivation for not reporting, the report concluded, was “to protect reputations”.

Such a mentality penetrated the Island’s highest levels of office, hindering children’s allegations from being taken seriously and repeatedly dismissed. Moreover, children in the care system were treated with utter indignation, often labelled as “liars” and “little villains”.

Even the legal system showed bias against their allegations. Complaints of abuse made by children under 14 had to be corroborated before being treated as “real” evidence up until 1997. Even after that, juries would be warned about fully accepting the evidence of children complaining of sexual abuse.

But while the report acknowledged that there had been some change from that point, children in care were deemed to be “still at risk” in Jersey, with poor oversight of services. Between 1981 and 2001, there were no independent inspections of services, while from 2001 onwards, there have only been ad hoc ones.

Ensuring that checks are undertaken on a more regular basis is one of the report’s eight recommendations:

The Panel resolved that they should return within two years for an update on the progress of the States of Jersey with regard to the issues raised.

This afternoon, the Chief Minister will address the concerns raised in the report in a statement and outline some of the key learning.

Posted by William Boyd on Jul 3rd, 2017
Next time you read in our esteemed local news organ an article by Helier Clement or some local member of the island ruling elite about the wonderfulness of 'The Jersey Way' just remind them of this report. Don't ever let them forget it. If this gets published on here it will be a miracle. If I never hear that worn out trotted excuse of a saying for corruption again it will be too soon, believe me.
To place a comment please login Login »