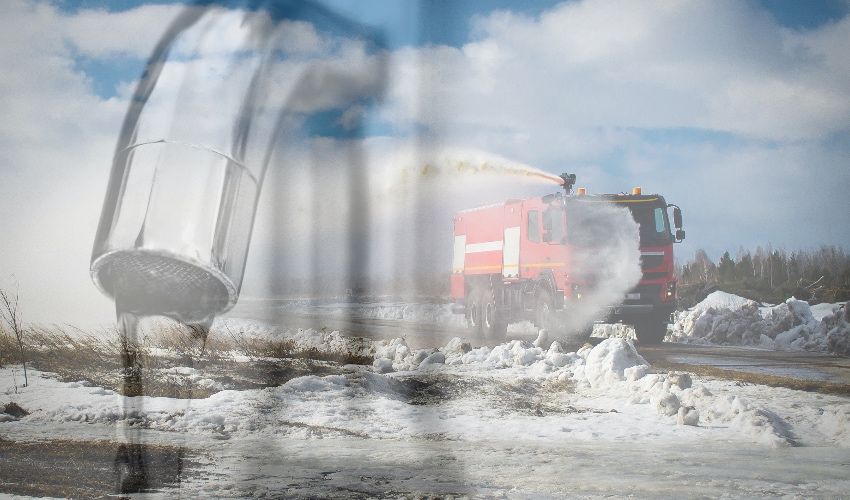 A new Government report has revealed that the Airport was still using firefighting foam containing a toxic chemical up to the beginning of this year - 27 years after initial ban.

While firefighters stopped spraying foam containing ‘long-chain’ PFAS in 1993, when it was discovered that it had contaminated nearby streams and boreholes, the Airport continued to use foam with ‘short-chain’ PFAS in it.

But a new official report, which was published on Friday, states: “Recent evidence shows that shorter-chained PFAS chemicals are as much of a potential concern as the longer chained chemicals responsible for PFAS in St. Ouen’s Bay.

“It is vital therefore that shorter chained PFAS chemicals are removed from use as soon as possible. This includes their safe removal from the island.

“Ports of Jersey have confirmed that they have moved across to a fluorine-free firefighting foam and no longer have stocks of any chemical containing PFAS compounds.

“Note that firefighting foam containing PFOS/PFOA were removed from service in the first quarter 2020. Old stocks of the previous chemical have been appropriately disposed of/returned to the manufacturer. This occurred in the first quarter of 2020. The Town Fire Service also use fluorine-free foam.”

PFAS (or 'per- and polyfluoroalkyl substances') is a group of man-made carbon-based chemicals, produced by US corporations including DuPont and 3M, which were used extensively in post-war years because of their resistance to oil, water and heat. It was used in a variety of products including Teflon, textiles, paints and firefighting foam.

‘Short-chain’ and ‘long-chain’ refer to the fact that the former has fewer carbon atoms than the latter, which was thought to make it safe. However, studies have now found this to be untrue.

Pictured: The area of St. Ouen’s Bay which has been contaminated with PFAS chemicals, specific a type of PFAS called PFOS.

The admission is included in a second interim report called ‘PFAS and Water Quality in Jersey’ which is an update on the first interim report, which was published in July last year.

Published on Friday, the document gives a progress report on 18 recommendations that were made in the first interim paper.

Significantly, in addition to the admission that post-PFOS firefighting foam was still toxic, the new report says that hydrogeological survey of St. Ouen’s Bay, which was recommended last year, is yet to be carried out.

Jersey Water say that survey - along with another promised survey of Pont Marquet in St. Brelade - are crucial as these areas are sources of important groundwater, which the company used to pump into Val de la Mare reservoir before high levels of PFAS were detected.

The new report, however, says that Environment Minister John Young has submitted a funding proposal in the Government Plan to enable the two surveys to take place.

If the funding is secured, the report says that the two surveys will be undertaken next June.

There is no change, however, in the Government’s position on assessing the health of Islanders whose organs and glands may have been badly affected by ingesting PFAS-contaminated water.

The report maintains that Islanders with health concerns should consult with their GP. However, this advice has been strongly rejected by some residents, who argue that GPs don’t have the toxicological expertise or equipment to test for PFAS.

Commenting on the second interim report, Deputy Young said: “PFAS compounds will be around for a very long time and will present significant risks and challenges going forward, not only for our Island, but also for many other countries.