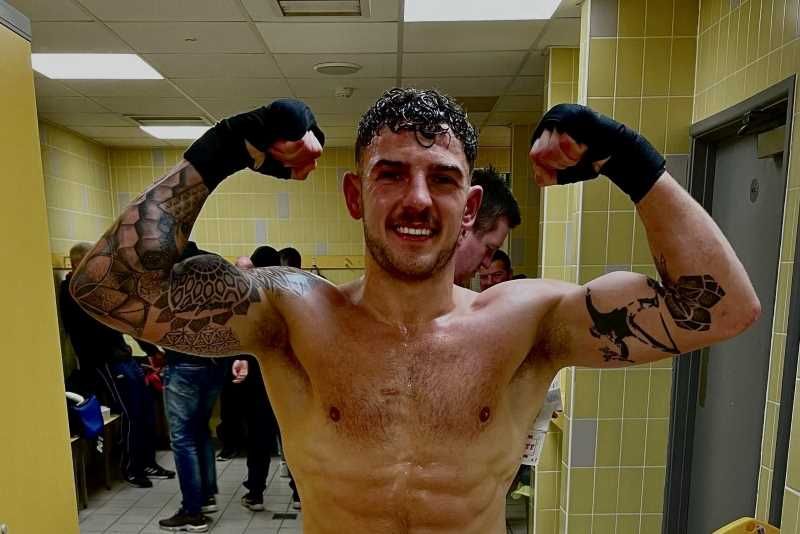 Guernsey and Alderney have two boxers in national finals this weekend.

Billy Le Poullain and Tommy Teers will cheer on each other at their fights in London.

25-year-old Le Poullain is in the finals of the National Amateur Championship in the 75kg category, where he will face the last opponent to beat him more than two years ago.

As well as being the first Bailiwick boxer to reach the finals of this event, Le Poullain is also preparing for his next assessment by the Team GB selection panel as he looks ahead to next year's Commonwealth Games. He will box for Guernsey at the Games in Birmingham, which he says will be like a "homecoming gig".

Le Poullain lives and trains in Guernsey while working as a carpenter for the Infinity Group. His family, including his mum, Noreen O'Brien, live in Alderney, where he grew up. They moved to the island from his mum's home city of Birmingham when he was nine. His mum recently posted on Facebook about her pride in her son.

Le Poullain's mum is rightly proud of her son's achievements in his chosen sport, as are his coaches and fellow athletes at the Guernsey Amalgamated Boxing Club, along with other boxers and supporters across the Bailiwick.

Le Poullain said he gets a lot of support from everyone involved in the sport locally. He feels ready to take the next step soon and is looking to go professional in the coming years.

Pictured: Billy Le Poullain is a member of the Guernsey Amalgamated Boxing Club, where Ben Duff is one of his coaches. Meanwhile, fellow GABC boxer Tommy Teers is into the finals of the Senior Development 52kg competition.

As well as looking to go professional, Le Poullain has a personal ambition to reach 100 amateur fights. This weekend will be his 79th and he is going into it feeling confident.

"I last boxed him (Ramtin Musah) two years ago and I lost in a close decision," said Le Poullain.

"It was my first fight at my new weight that I had just gone up to at that time. He was already established at that weight and was very highly regarded. I think I did myself justice but I just wasn't good enough on the day.

"I have matured a lot since then, physically and mentally. So he was the last guy to beat me, in May 2019, so it would be nice to get that result.

"But it's an amateur fight. It's only nine minutes. You can have a good day or a bad day. It depends who is on form at the time. But each fight I have had I have got better and better. I know I have, so I am feeling confident, yes."

His confidence extends to his assessments by Team GB, whose selection panels are already looking at future events, including the Paris Olympics in 2024.

By then, Le Poullain will be 29. He may have turned professional before then. He is due to be assessed by Team GB in mid-January as part of an ongoing process. He joked that his Christmas has been cancelled as there will be no room to indulge.

"I've done enough of that for the last couple of years anyway," he said, laughing. "I'll be in Alderney for Christmas with my family. Both of my sisters have had babies this year so it will be nice to be able to spend Christmas with the family and then get back into it in the New Year." 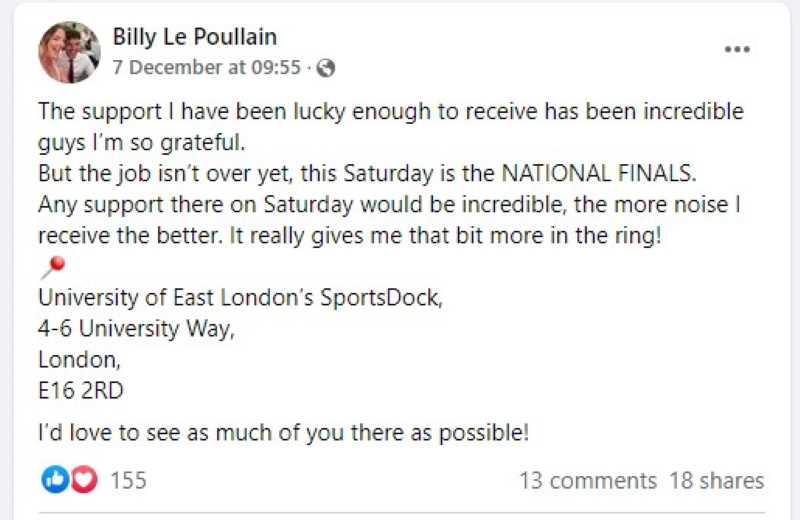 Pictured: Billy Le Poullain hopes to draw on his fans' support in a key fight against an old adversary this weekend.

Teers' competition is for boxers who have had fewer than 20 fights. This will be his 15th fight. And it is at the end of the week in which he turned 24.

Le Poullain said that he and Teers will support each other in London. Teers' final is scheduled to start around 11:00. "I will 100% be there for him, cheering for him", said Le Poullain. His own final is at around 16:00.

The finals will be streamed on BBC iPlayer as well as Youtube.