All aboard! Entrepreneur proposes rail link with Guernsey 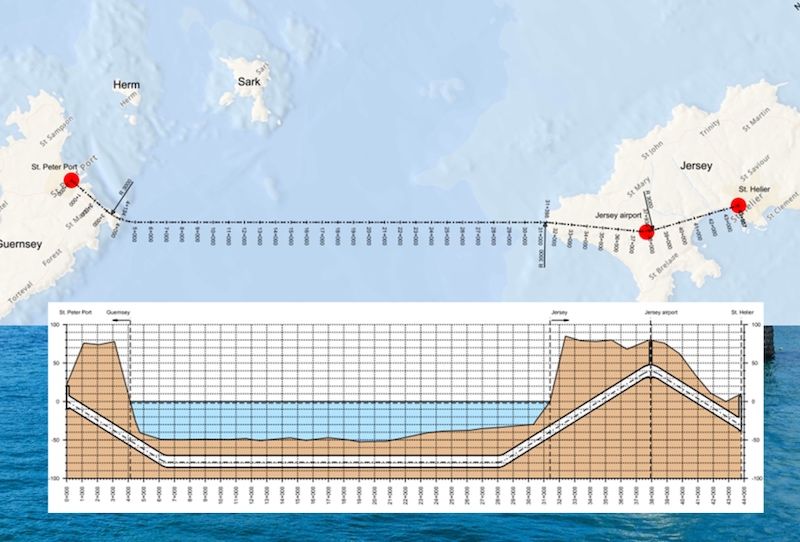 All aboard! Entrepreneur proposes rail link with Guernsey

Another Channel Islands entrepreneur has stepped up with a scheme to better connect Jersey and Guernsey – this time, in the form of a £2.6 billion underwater rail tunnel.

Many minds have aimed to establish a physical link between Guernsey and its fairer sibling over the years, with no plans as yet coming to fruition; but Guernsey businessman Martyn Dorey says his proposals are progressing well.

He has been obtaining technical advice from Danish experts Ramboll, who previously advised on a 18km fixed 'immersed' tunnel link across the Fehmarnbelt in Scandinavia and the Queensferry Crossing, which is the world's longest three-tower, cable-stayed bridge.

If successful, Mr Dorey says the ground-breaking project would enable islanders to travel the 44km route between St. Peter Port and St. Helier in just 15 minutes, with a stop-off at Jersey Airport on the way.

Pictured: Martyn Dorey said his project would require government support to get it off the ground.

The plans are still in their infancy, he admits, and serve as a more viable alternative to his original suggestion: an underwater motorway.

"The width of a car tunnel would need four-way traffic and that would be very wide and much more expensive to dig," he said.

"We have to design a solution to meet everyone’s needs and do so in such a way that also meets the needs of the investors."

He sees it as a primarily private sector project, as it would amount to about 2p in the taxpayer's pound if the States of Guernsey were to fund it.

"It would take about five years to get established and we want to see government support for the initial years, as it will take many years to bring investors on board," he said. "The first question is how do we get the feasibility study paid for, as that is not something they (a private investor) would usually do." 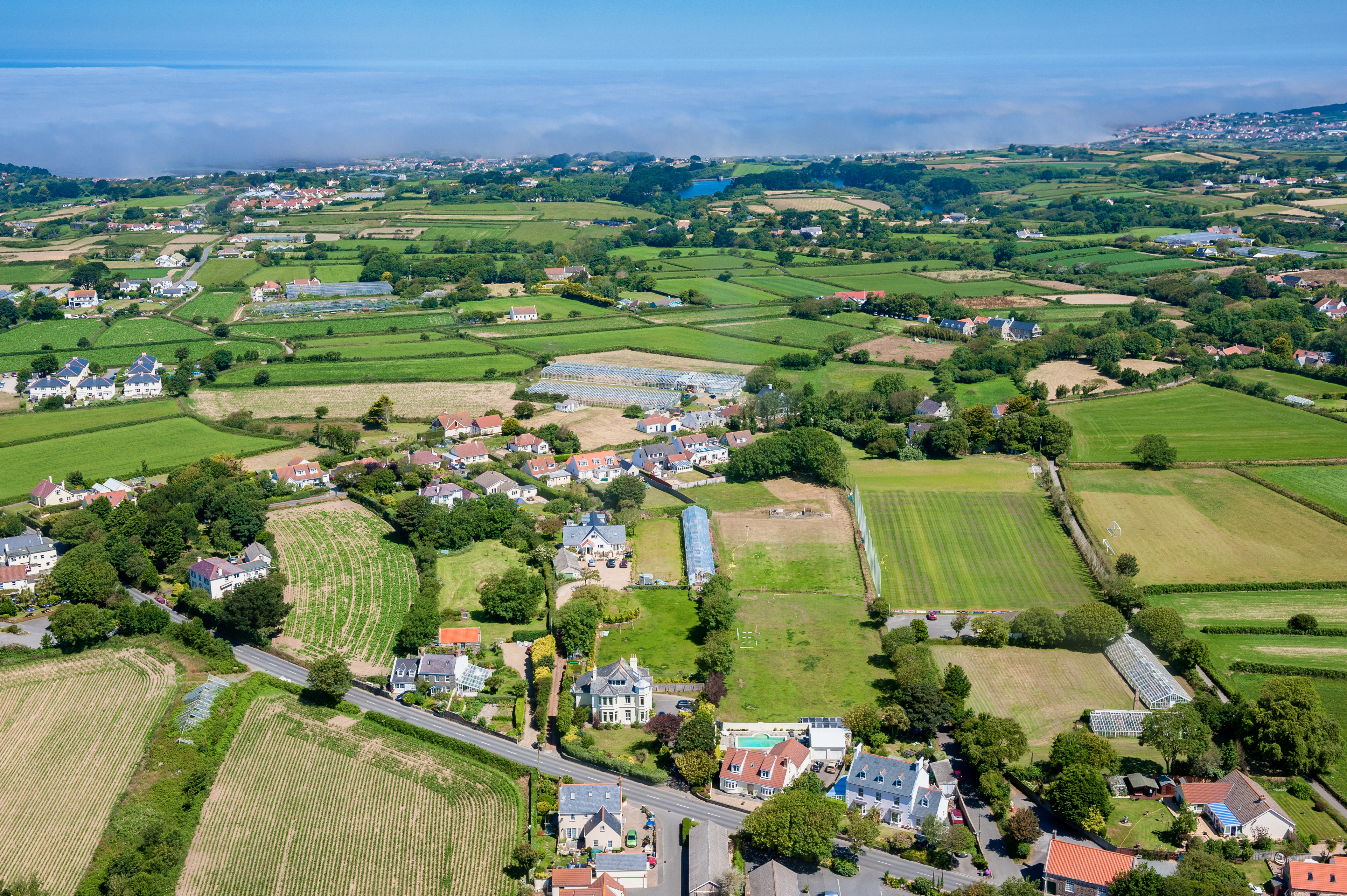 Pictured: Mr Dorey says the tunnel would enable islanders to travel 44km between Jersey and Guernsey in just 15 minutes.

In terms of the project's economic benefits, Mr Dorey said the tax take would be "off the scale", while there would be many economic, cultural and travel benefits.

"The repayment time would depend on the growth in GDP, which may see a 25% boost if you see how people behave when they have a high speed travel link," he said.

He added that a high-speed link would better enable Guernsey,  which in 2018 welcomed around 280,000 visitors excluding cruise visitors and yachts, “to tap into the 750,000 people who visit Jersey every year”.

Ultimately, the success of a subsea train service in the Channel Islands would hinge on the speed - Mr Dorey is aiming for 15 minutes between St Peter Port and St Helier - and the price point, which he believes needs to be a maximum of £30 for a one-off booking and potentially as low as £10 for regulars.

"This certainly isn’t going to be an instant flash in the pan, this is going to be a long slog," he said. "It is definitely technically achievable and the best bang for our buck will be a rail link rather than a motorway."

Pictured: Jersey business guru Kevin Keen is a strong advocate of building a bridge to France, arguing that it could assist with the housing crisis.

While the idea of bridging the gap between the islands has often been discussed, so too has linking Jersey with France.

Kevin Keen generated significant stir in a September 2018 column for Express when he suggested building a bridge between the island and the European continent.

He argued that establishing such a link would be a positive move for first-time buyers seeking a bargain property - "Normandy is not very far away and property prices are somewhat lower" - and would also allow islanders to fight back against rises in the cost of living locally by accessing cheaper food prices.

"...Concerns about our growing population would also reduce," he observed, adding: "Of course building such a bridge would be expensive but there would almost certainly be a queue of infrastructure funds ready to finance it, and benefit from the tolls.

"Yes I know it sounds mad, not least because the value of existing Jersey homes would probably reduce, and of course there would be all sorts of complications, including building such a bridge - but we have to do something."

Pictured top: A graphic of the proposals. (Ramboll)

Posted by David Moon on Jan 7th, 2020
The suggested tunnel linking Jersey to Guernsey is of more interest to Guernsey thé it is Jersey. The ridge proposed by Mr Keen linking Jersey to France would be far more advantageous to Jersey for the reasons which he has explained which should not only reduce the Jersey cost of living and open opportunities to live in France and travel in Europe. The bridge might possibly include wind or hydro powered turbines to generate electricity. The only deterrent is the short sighted entering into a customs union with the UK, Guernsey and the Isle of Man. We have yet to be convinced how this is in the Island’s interest when the representatives of both ,the agricultural and fishing industries have expressed fears that this will be detrimental to the future of their industries and whilst no one has commented from the Finance Industry it is known that some banks and financial organisations are moving operations to Dublin which is being inundated with financial organisations setting up shop there. Seems like Jersey has shot itself in the foot. It remains to be seen how a union with Guernsey and the Isle of Man is going to benefit Jersey. Like the Manx sheep, something we could do without.
Posted by William Boyd on Jan 7th, 2020
Tunnels/bridges to France/Guernsey are utter fantasy, utter, utter fantasy. Stories like this should not see the light of day. Ever heard of Crossrail or HS2? £2.6 billion back-of-a-fag-packet figure. I would love to see the cost benefit and SWOT analyses.
Posted by Patrick Gormley on Jan 8th, 2020
Just why anyone would want to drive to Guernsey is beyond me !!!!
To place a comment please login Login »

FOCUS: The wartime history of the Mayfair Hotel