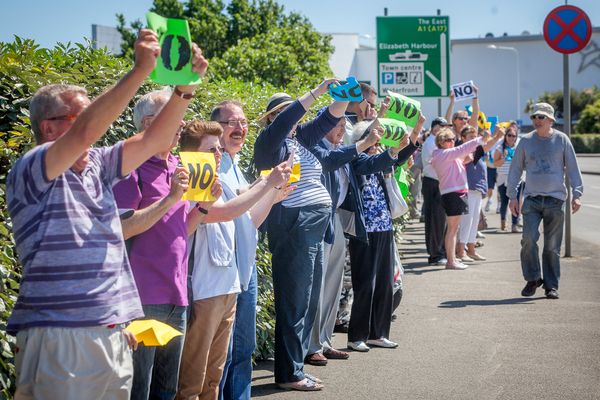 Organisers say that almost 2,000 people attended yesterday’s protest to say a resounding “No” to plans for a huge office development on the Esplanade.

Organiser Sean Power – a former States Deputy – says that he is delighted by the turnout, which he says has sent a strong message to the States of Jersey Development Company and the Council of Ministers that the public aren’t convinced by their plans.

Protestors held signs saying “No” and signed a petition as they stood around the car park – and drivers hit their horns.

Ten days ago it was announced that UBS had signed on the dotted line to become the first tenants for the Jersey International Finance Centre – the controversial and delayed development of six office blocks planned for the Esplanade car park.

But while the States-owned developers say that work could start immediately, doubts have surfaced about the finances and the risks of the project. A Scrutiny report on the project is due at the end of the month, and Deputy Power says that nothing should happen until it is published.

“There is a possibility that they will delay until the report is published,” he said.

“There will be a plea to the head of the development company and the Chief Minister tomorrow that nothing should happen until the end of June.

“If the Scrutiny report says it’s a financial disaster, I will expect the Chairman of the development company to resign, and I think that the Treasury Minister’s position will be untenable.

“If the report comes back the other way, then I will shut up and go away.”