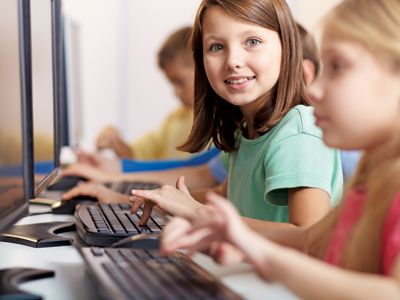 More youngsters will be code crunching, designing their own apps and programming robots at school this term.

A pilot project which was launched in September last year to fill the skill shortage in computing in the Island’s States primary schools, improve teachers’ computing skills and inspire pupils to use technology from a really young age is being rolled out to eight more schools this term.

Pupils as young as four at St Martin and d’Auvergne schools were the first to learn from Hautlieu’s computing and IT teachers.

It was a sticky start with children having to work out the logical way of making a jam sandwich but they’ve gone on to design their own programmes and used them in their French, numeracy and literacy lessons.

Hautlieu’s Deputy Head teacher Stuart Hughes is leading the project and said: “The reaction has been fantastic. We already know that this has been a great success so we did not want to wait before giving other schools the opportunity to get involved.

“At St Martin’s and d’Auvergne, children as young as four are programming robots, games, apps and writing programs to control real-life systems such as lighthouses and ferris wheels. In view of this excellent response we have brought forward the roll-out to other primary schools.”

D’Auvergne’s Head Teacher Cris Lakeman said: “We’ve really been surprised by how fast the children have moved forward. They have done so much more than we were expecting. The children absolutely love this project and the new skills have given our teachers extra confidence to really develop this subject area.”

“We have children as young as 10 inventing their own games and apps. They are even planning a personalised grammar checker to help them meet their own targets in English. It is just amazing to see what young children have achieved as a result of this project.”

Deputy Head at St Martin’s School Jenny Pryke said: “The primary coding project has been very well received by both teachers and pupils and has given us a strong base from which to move forward with the new computing curriculum.

“The children have been so engaged and motivated by what they are learning and the teachers are keen and enthusiastic to learn alongside them. Learning hasn’t just taken place in school; many children are excited to practise what they have learnt at home too.”

All States primary schoolchildren will be coding by the end of this year.

In October last year the Education department launched a strategy to help make sure the next generation of Islanders can keep up with changing technology with a new approach to teaching IT. A new IT curriculum will be delivered in schools from September and the IT infrastructure across the Island's schools is being upgraded.

Assistant Education Minister Deputy Rod Bryans said: “This project is a strong example of how Jersey is moving forward and is bringing together the Thinking Differently strategy, the Skills Strategy and the overall Digital Strategy for the Island to prepare our young people for the future.”