ART FIX: Power to the people! 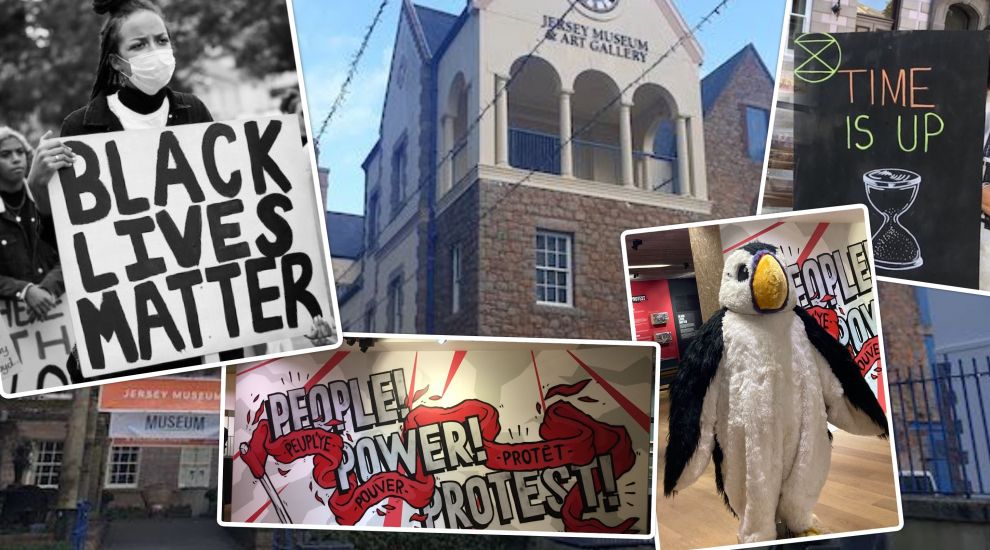 ART FIX: Power to the people!

On the 250th anniversary of the laws which came about as a result of the 1769 Corn Riots, Jersey Heritage is exploring the island's protesting past.

Power to the people!

Jersey Museum and Art Gallery will be hosting a new exhibition - 'People! Power! Protest!' - exploring the story of protest in Jersey, from the Corn Riots of 1769 to the Black Lives Matter movement of 2020.

Items included will be the official 18th century court records showing the redacted demands of the Corn Riots protestors, as well as the petition signed by thousands of people to try and save Queen's Valley from being flooded in the 1980s. 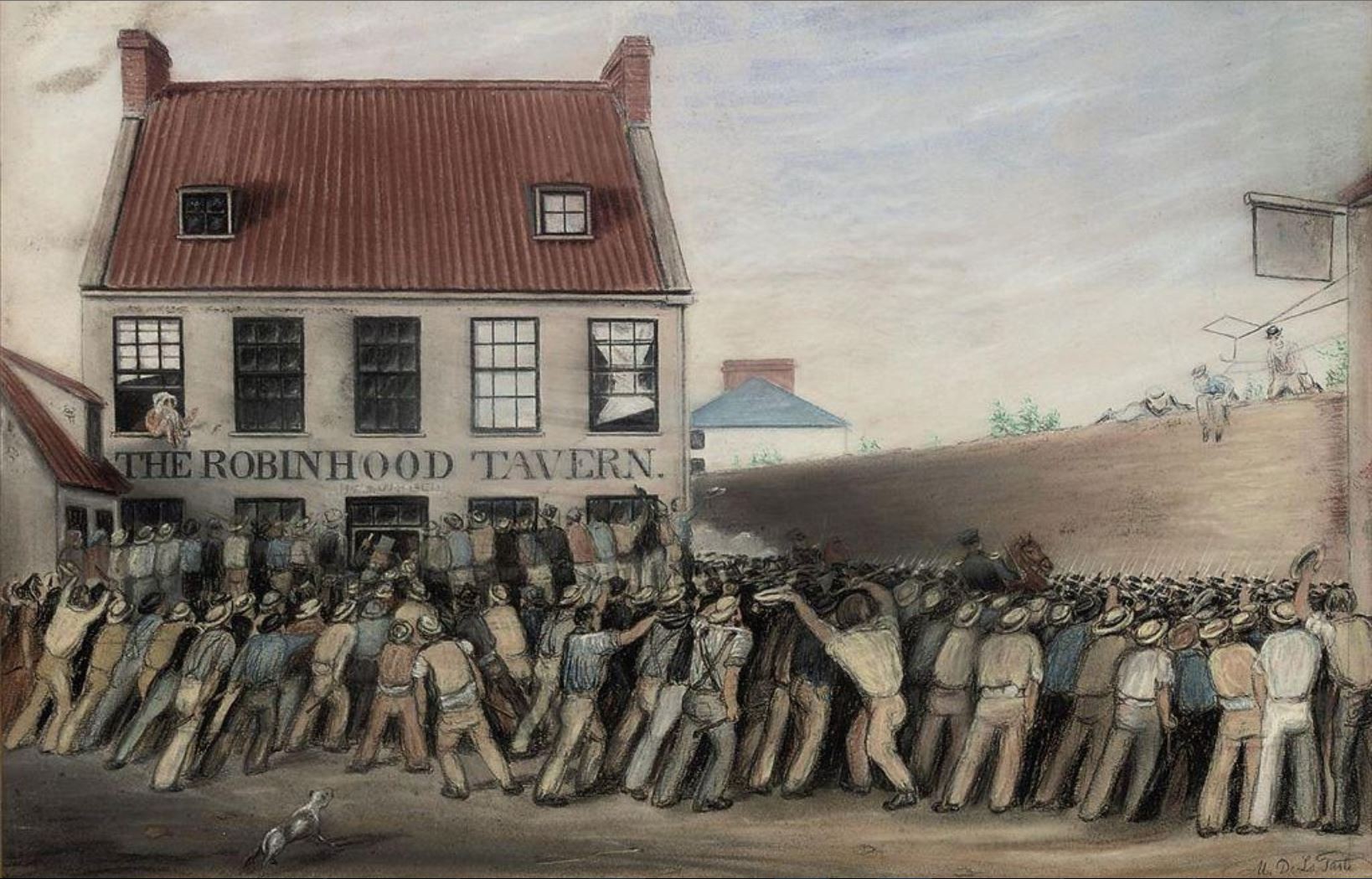 Pictured: The exhibition explores the story of protest in Jersey, dating back to the 1769 Corn Riots.

Express asked the exhibition's curator, Lucy Layton, to give some insights into its creation...

Can you tell us why the theme of protest was selected?

This year is the 250th anniversary of the Code of the Laws that came about as a result of the Corn Riots in 1769. This was when people came together to protest at the lack of democratic government in the Island and we decided to dedicate an exhibition to exploring the story of protest in Jersey over the years.

Can you tell us about some of the other protests that feature in the exhibition?

We have taken a thematic approach and considered the reasons why people protest, whether those are economic, political, environmental or social issues.

The exhibition covers topics as diverse as the anti-apartheid protests of the 1980s, the Iraq War peace vigils, the ten-year campaign to save Queen’s Valley, the death penalty and gay rights. We suspect the star of the show will be the giant Puffin mascot from the National Trust for Jersey’s successful campaign to save Plémont! 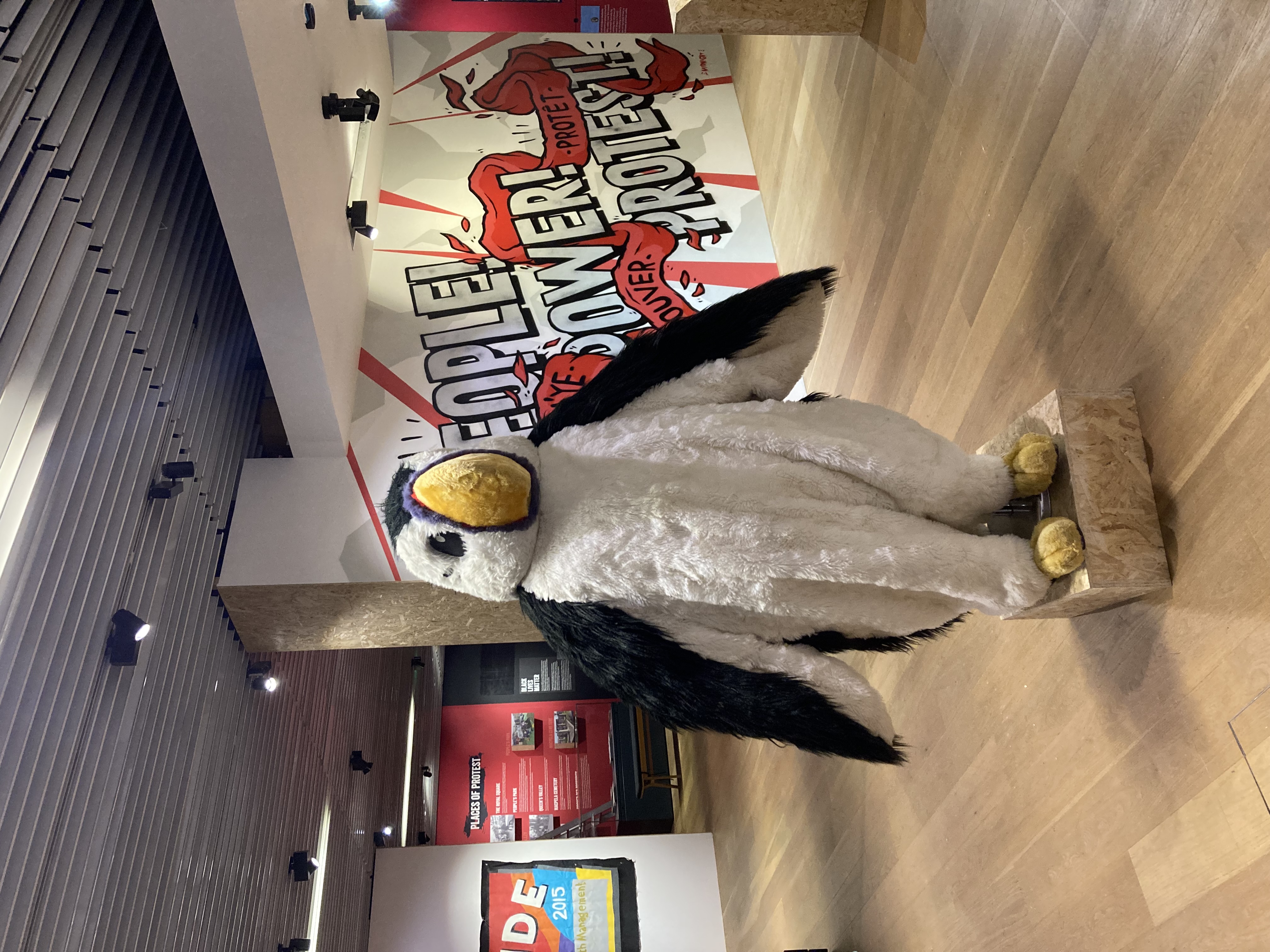 Pictured: Lucy said she suspected the star of the show would be the National Trust's 2009 Puffin mascot.

Has the nature of protests changed over time?

Traditionally, protests have been about people coming together to voice their concerns about an issue.

We have a fantastic image in the exhibition of Bread Riots in Jersey in 1847 where people, driven by rising food prices, tried to storm the Town Mill and the Riot Act was read by the Constable outside the Robin Hood Tavern to try and disperse the crowd.

In recent years, however, protests and campaigns take place increasingly online and this changing nature of protest is another of the themes that we explore in the exhibition.

Last year, Jersey Heritage added the signs and banners created for the local Black Lives Matter protest to its collection, which future generations will have access to. How do you capture today’s history for posterity? How do you decide what is ‘worth keeping’?

We don’t have the resources to do a lot of contemporary collecting but sometimes an event happens that feels like a watershed moment. Last year, we collected some material from the Black Lives Matter vigil and these will be on show in the new exhibition.

We also invited members of the public to take part in a community project to document the Covid-19 pandemic. When historians of the future look back at 2020, we feel these events will define the year, both globally and locally. 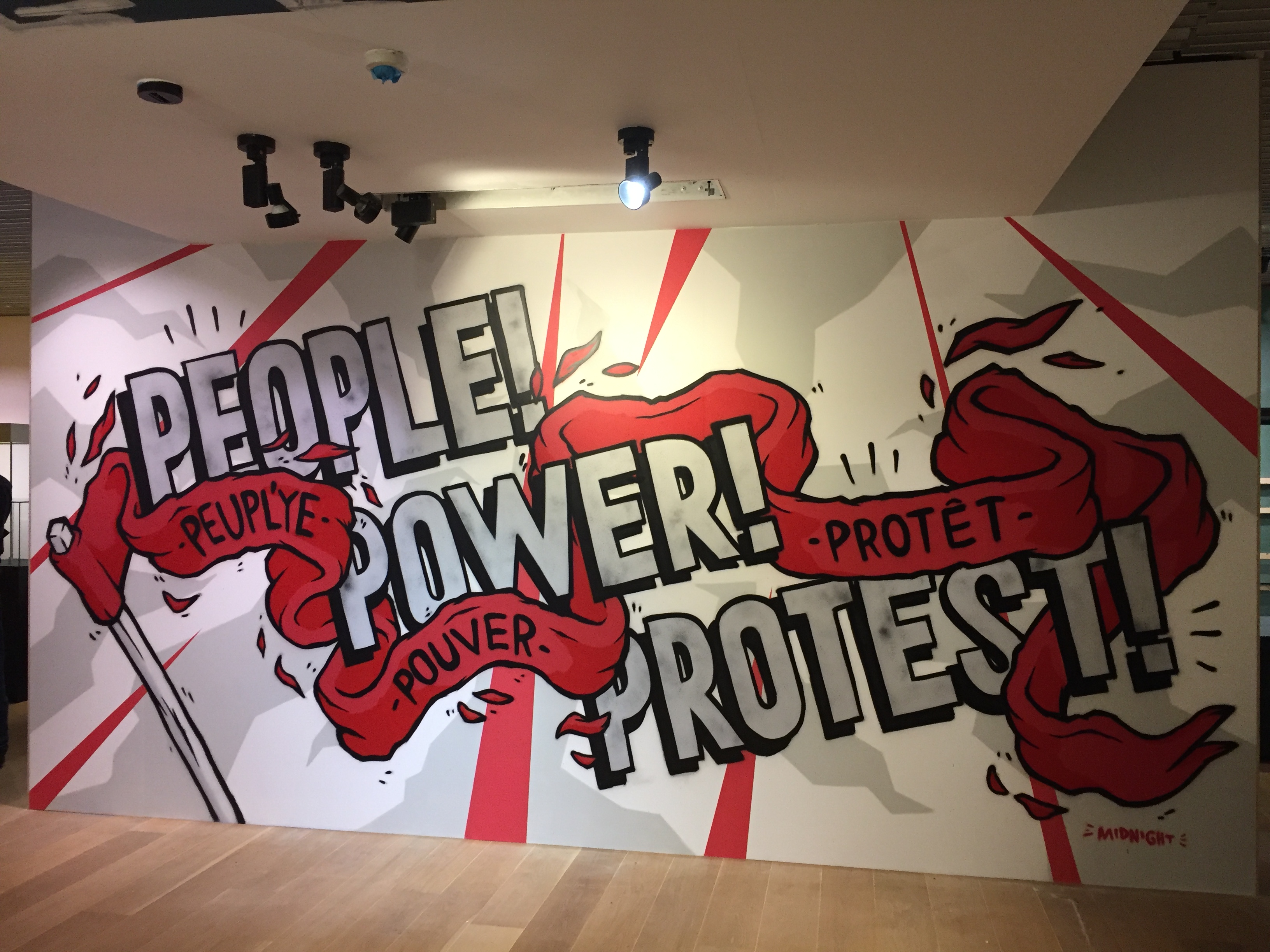 Pictured: The exhibition looks at Jersey's relationship with protests all the way up to present day.

A lot of the island’s current history is captured on social media and the internet nowadays, has Jersey Heritage given any thought on how to preserve this for the future?

Jersey Heritage works closely with public institutions to try and capture records they produce, including websites and social media.

We work with the British Library which runs the UK Web Archive and has responsibility for archiving the .co.uk domain. 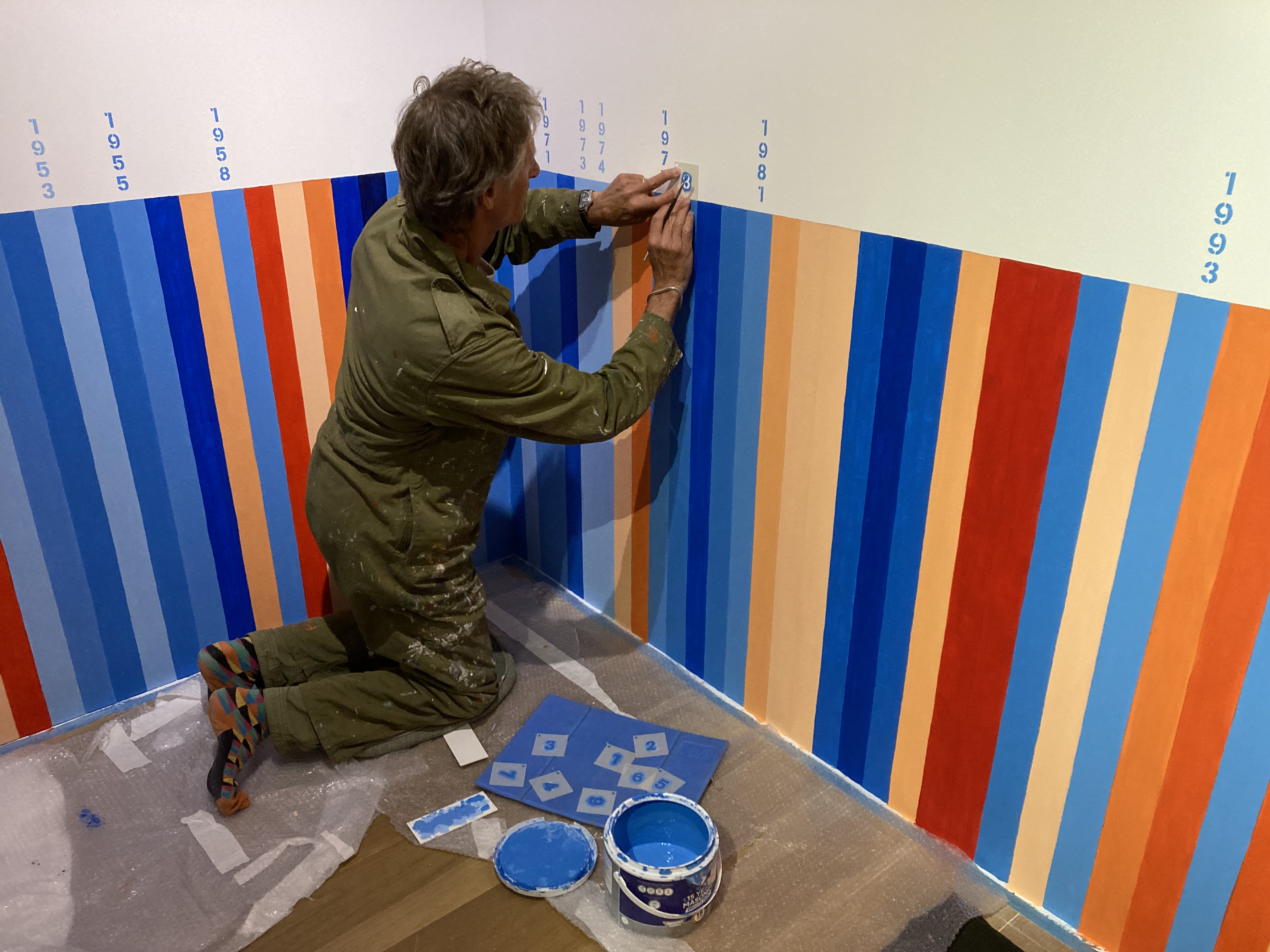 Pictured: Local artist, Ian Rolls, contributed a special version of his climate stripes for the exhibition.

The British Library is happy for Jersey Heritage to select websites to form a ‘Jersey collection’ and add them to its catalogue, which we have been doing for a few years now. It then harvests the websites we select, stores the content and makes the information available on its UK Web Archive pages as long as they have permission from the site owner.

We are happy to hear from people who would like to nominate websites to add to the Jersey Collection. 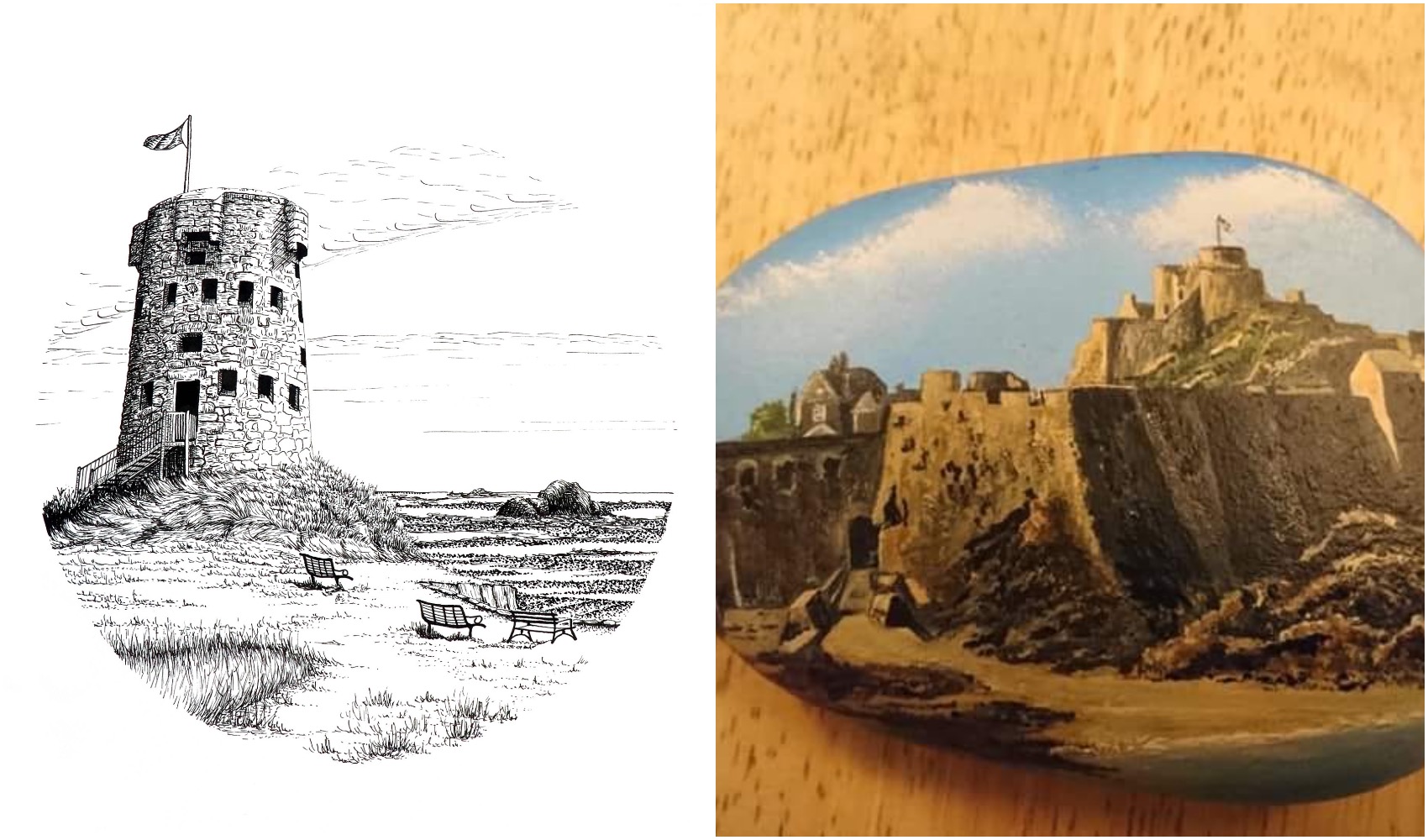 Pictured: Artists Ali Robinson and Anita Rive will be offering workshops during the summer holidays.

RampArts is inviting Jersey's children to participate in a series of workshops put together in collaboration with the Société Jersiaise, and aligned with the Festival of Archaeology.

Local artists Ali Robinson, Anita Rive and Hope Southam will be running the workshops at Elizabeth Castle throughout the summer holidays, starting from tomorrow, with all materials provided, and sessions free to Jersey Heritage members. Non-members will need to pay entry on the castle to attend. 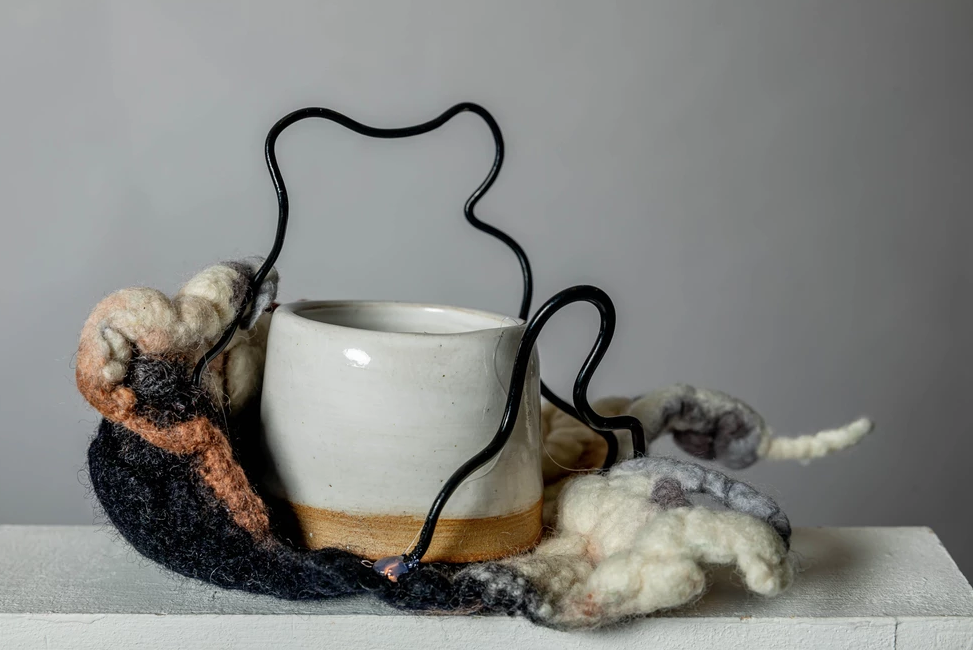 Pictured: Hope Southam will be offering a class on clay creations.

The workshops are scheduled as follows, with a maximum of 10 spaces at each:

Ramping up the self-expression

The workshop isn't the only art event that RampArts have on either this month - their new exhibition at the Art Centre's Berni Gallery is running from now until Saturday 24 July, and featuring an exploration of self-expression, imagination and true-self.

Local artists such as Aaron McMullen, Jacque Le Breton, and Kay Are have contributed, as well photographers Carlo Zen and Melissa Rodrigues, and illustrator John Lewis.

Love, loss and the fear of dying

A new exhibition is asking viewers to think about their relationship with the world around them, through undulating shapes and curves that echo natural forms.

Displayed in unused retail space on the corner of Charing Cross and Pitt Street, Jersey-born artist Lulu MacDonald’s ‘The Things Forever Speaking’ tries to imagine a world where nature, not humankind, is the protagonist. 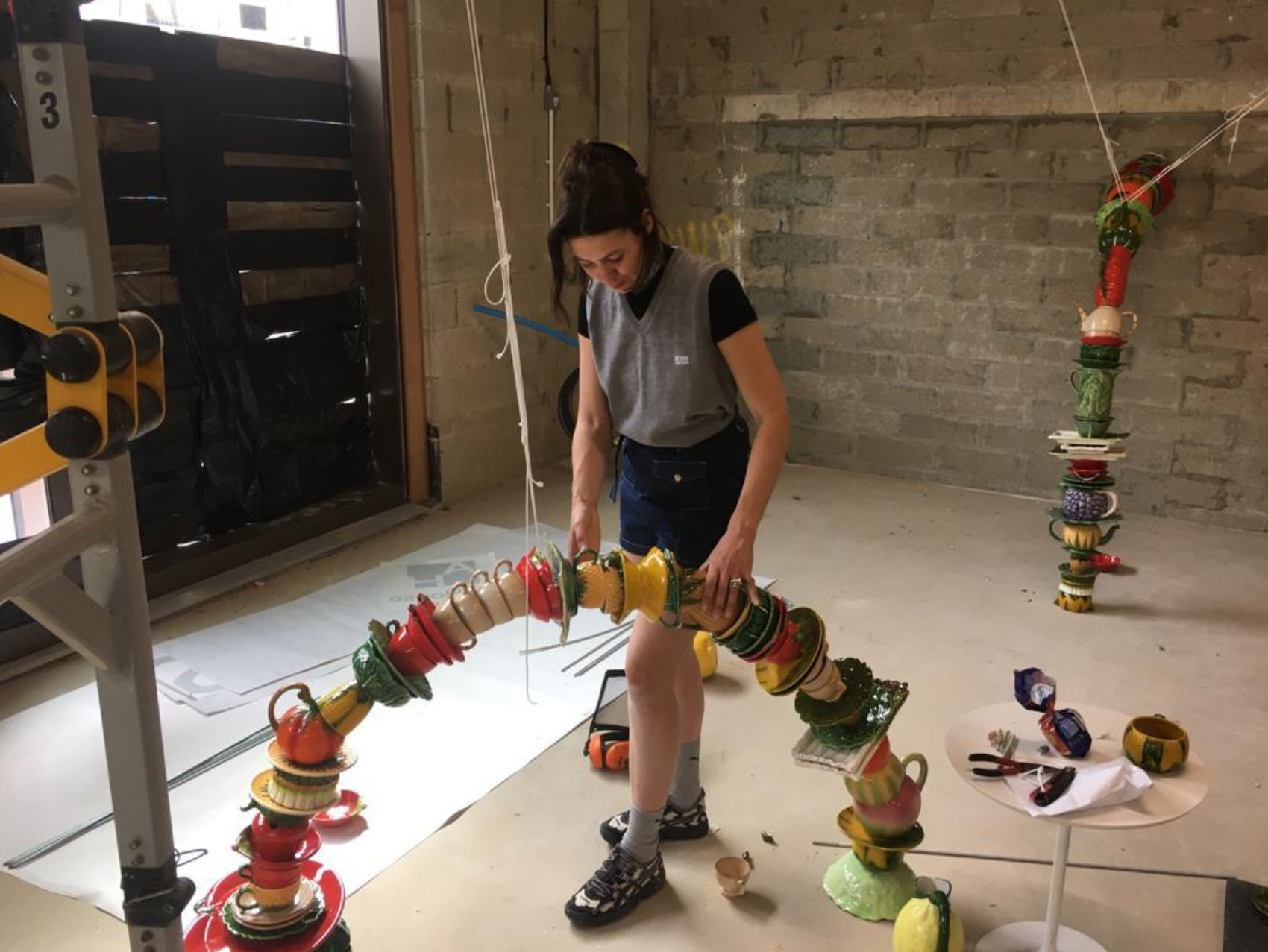 Pictured: Lulu said her work was about "connectedness, love, loss, the fear of dying and of experiencing illness."

Talking about her exhibition, Lulu said: “During this pandemic, we’ve all had to confront our own vulnerabilities in a moment where we’ve been denied closeness with our nearest and dearest.

“In this vein, I’m making work about connectedness, love, loss, the fear of dying and of experiencing illness."

On its unique, setting, she explained: “‘It’s amazing to have such a large room. It feels as monumental as having an institutional exhibition somewhere." 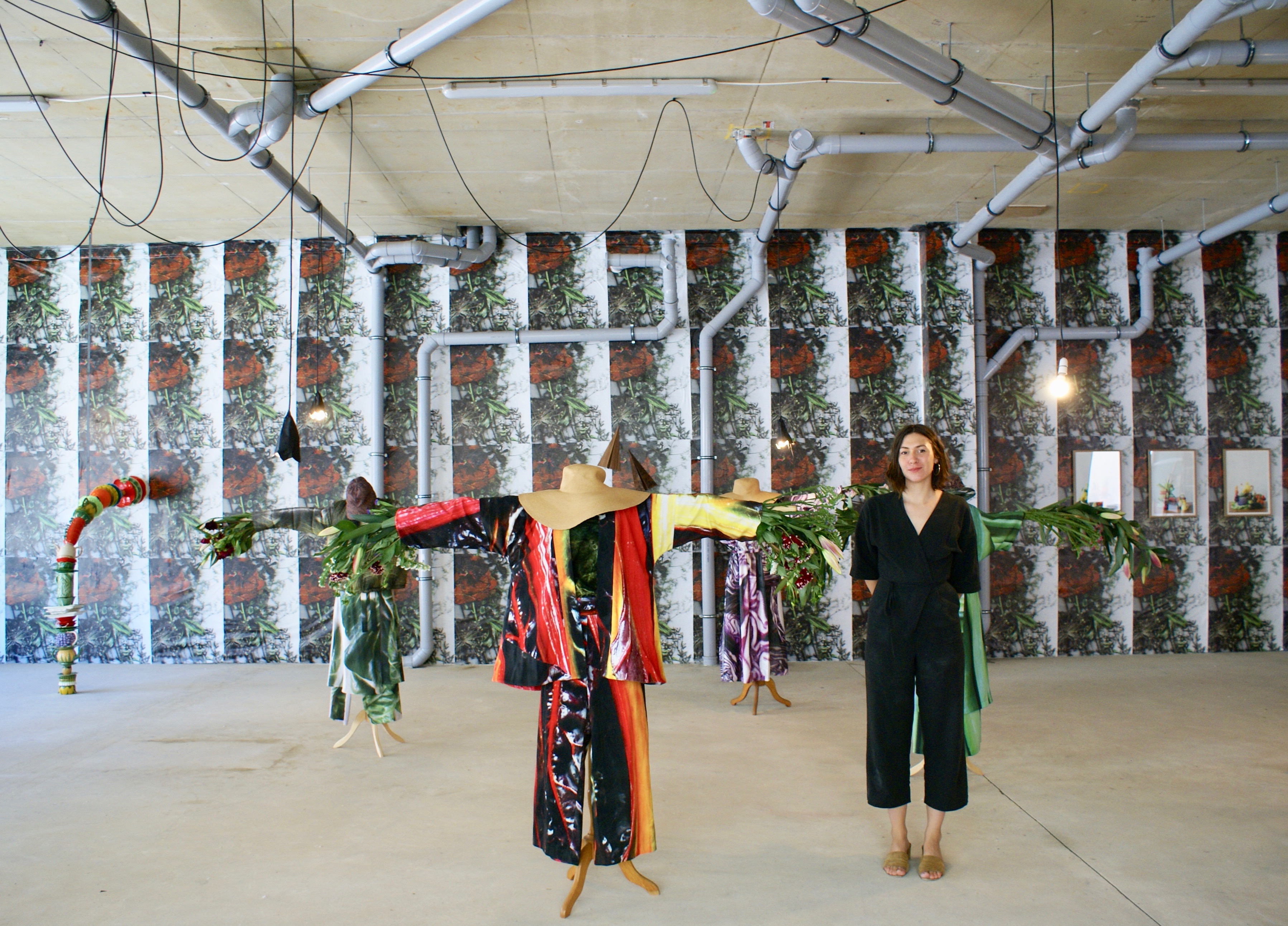 Pictured: "I’m making work about connectedness, love, loss, the fear of dying and of experiencing illness."

She continued: “The scale is just amazing and I’m so excited to fill it. I’m also glad that the building is relatively new, so people aren’t likely to have any preconceptions or associations with it. ArtHouse Jersey has always believed in my work.

“They invested in a show straight after my bachelor degree. I had won a big prize after graduating from the Slade and wanted to make something that I just couldn’t afford to do at the time.

“I was fresh out of university, knee deep in debt and they swooped in and backed me. Having an organisation believe in your work and back it with that kind of support is invaluable for an artist.” 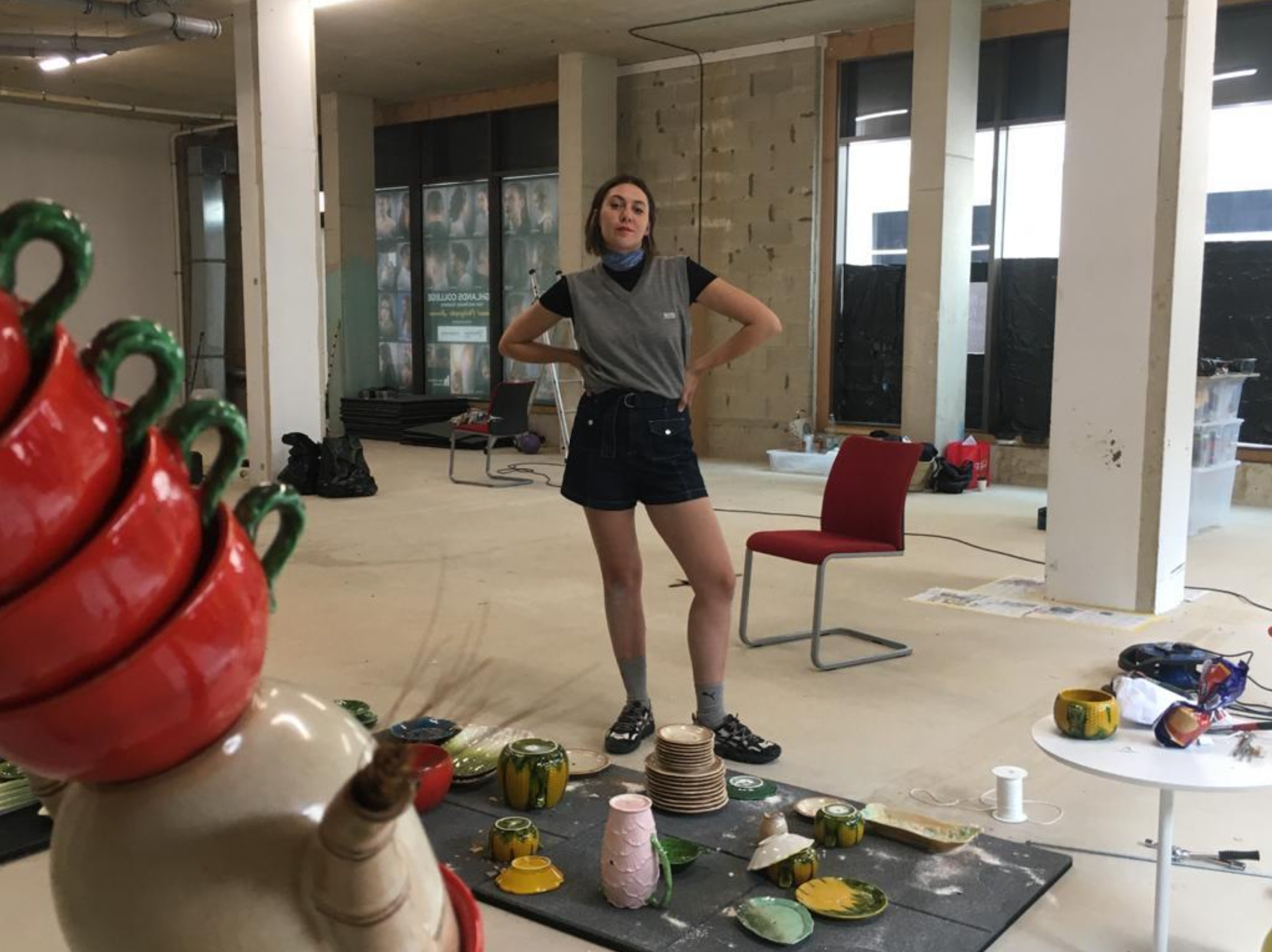 Pictured: The exhibition is based in unused retail space on the corner of Charing Cross and Pitt Street.

On this collaboration, Lulu said: “Whilst the majority of the work that will be shown at this exhibition is conceived, designed and built by me, there are some specialist elements that benefited from the skill-sets of my collaborators.

“This collaboration happens on different levels – from commissioning skilled craftspeople such as Jo to create four stained glass hats to a deeper, more entangled collaboration shown through the line of vegetable clothing or the poetry anthology."

Local composer, Charles Mauleverer, will be launching his first ever publication tomorrow at the Jersey War Tunnels.

'Faithful and Free' will be translate Charles Mauleverer's score to commemorate the 75th anniversary of the Liberation of the Channel Islands to the page.

“When I was asked by the Bailiff’s Chambers to write this piece to commemorate the 75th anniversary of the Liberation of Jersey the idea was that some members of the Royal Family might be visiting the island," Charles told Express earlier this year.

“The idea was to create a really nice, specially bound version of this book which I was asked to present to those guests. It was a huge honour and something I had not done before, trying to make a music score visually beautiful, thinking carefully about the binding, the cover, the printing, the paper.”

Though the pandemic stopped these plans, this launch now will see the book available for all islanders to keep what is described as "words and music written by hand over sumptuous images of the island from contributing local artists."