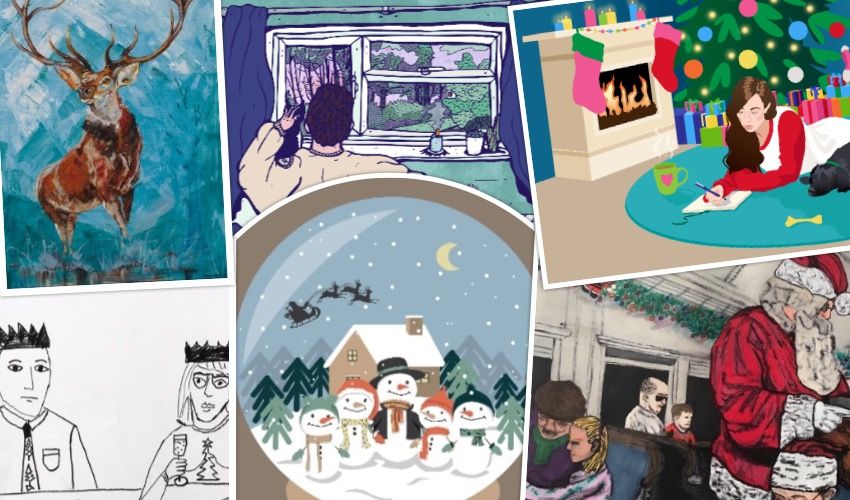 This Christmas, a group of local artists have given Express the gift of their creativity and created a series of original illustrations to help everyone get in the festive spirit.

Christmas memories, ideal Christmases, holiday traditions and humour combine in the gallery of illustrations and paintings.

A mixed media artist, Will Bertram is mostly known for his illustration, often featured in local magazines. He is ’currently Artist in Residence at Highlands School of Art, and  working as Artist Co-Ordinator for Durrell’s 60th Anniversary project, Go Wild Gorillas. Will is encouraging artists near and far to send their ideas for a gorilla makeover before 6 January.

“One of my favourite paintings is Pieter Bruegel’s 'Hunter in the Snow,' which captures a bleak winters day that contrasts the hardships of the time and the communal activities that winter brought. I took influence from Bruegel for my illustration, however, I aimed to show the comfort that a cold winters day can bring. 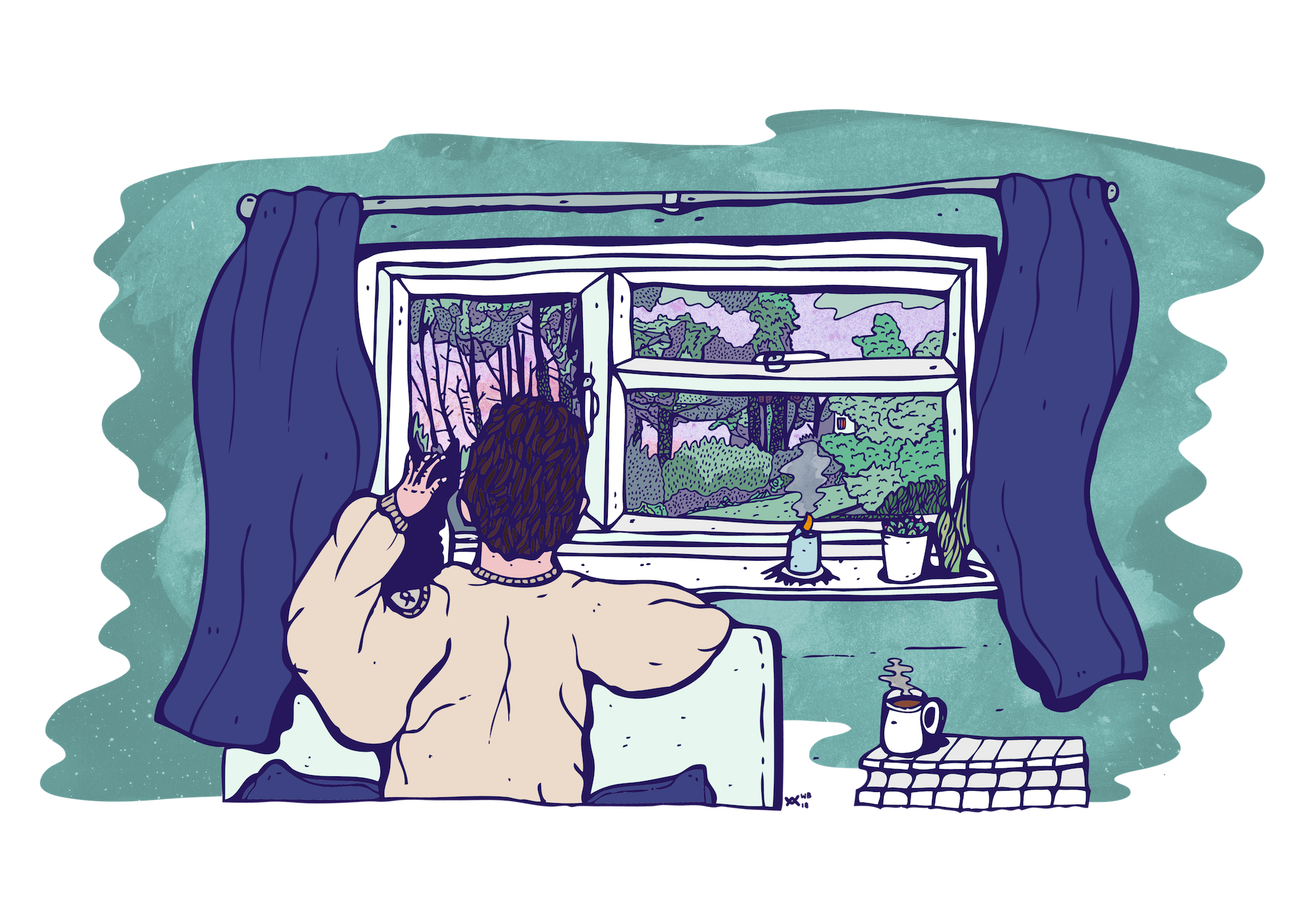 "Amidst the hectic build up to Christmas, grey days become the perfect excuse to stay inside, draw, drink coffee and binge-watch documentaries on Netflix, slowing things down before the excitement and festivities of Christmas Day. This piece was done digitally, using an iPad Pro whilst drinking coffee and with a Christmas film on in the background, making good use of one of those grey days.” 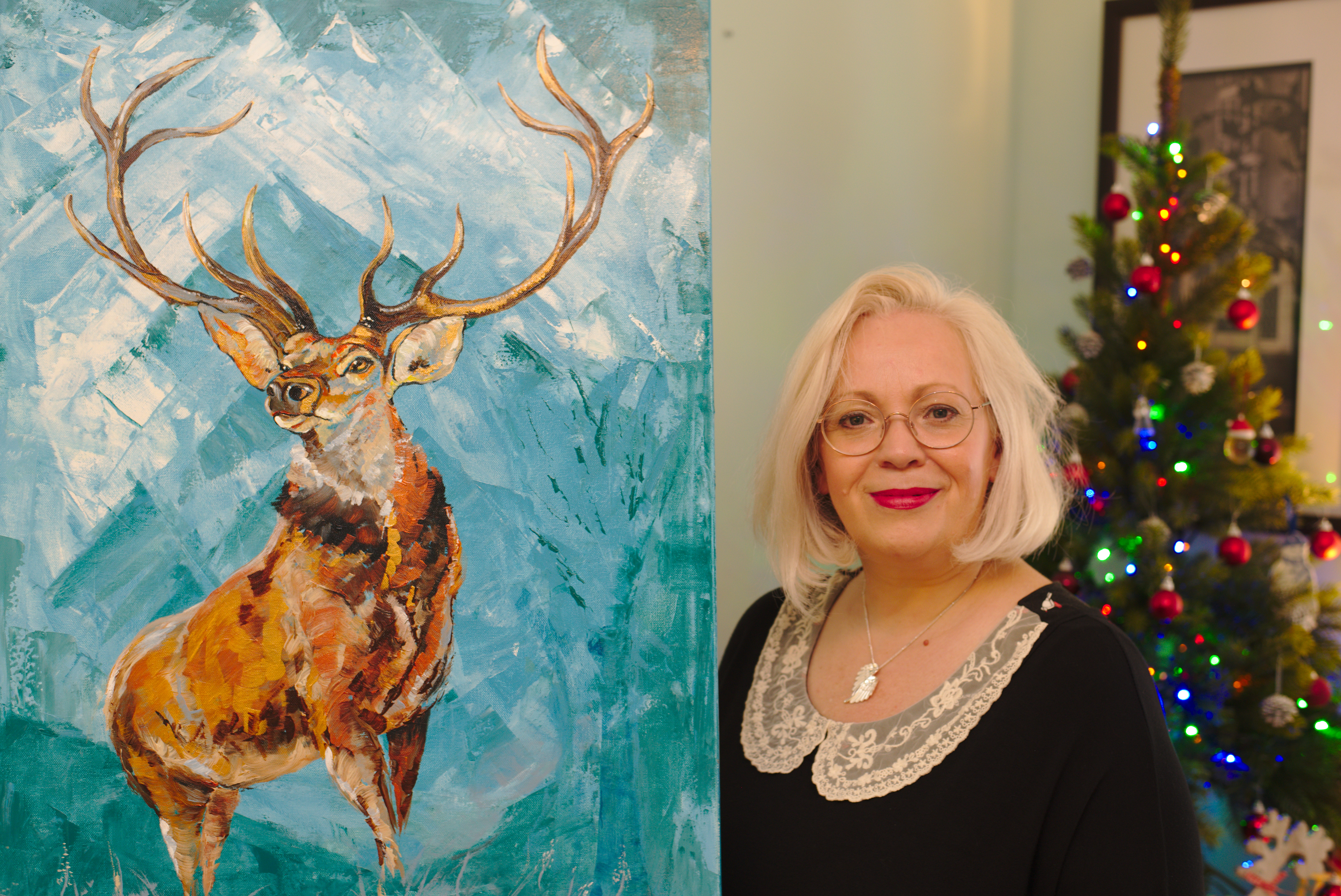 For Christmas, she not only painted a Christmas memory but also wrote a short story called 'Christmas Morning'.

Shirley said: "Having grown up in Scotland and lived some of my teenage years on the West Coast of Scotland, living on Isle Of Arran where the Stags would regularly come down off the snowy mountain and just stand in our garden, this memory always reminds me of Christmas." 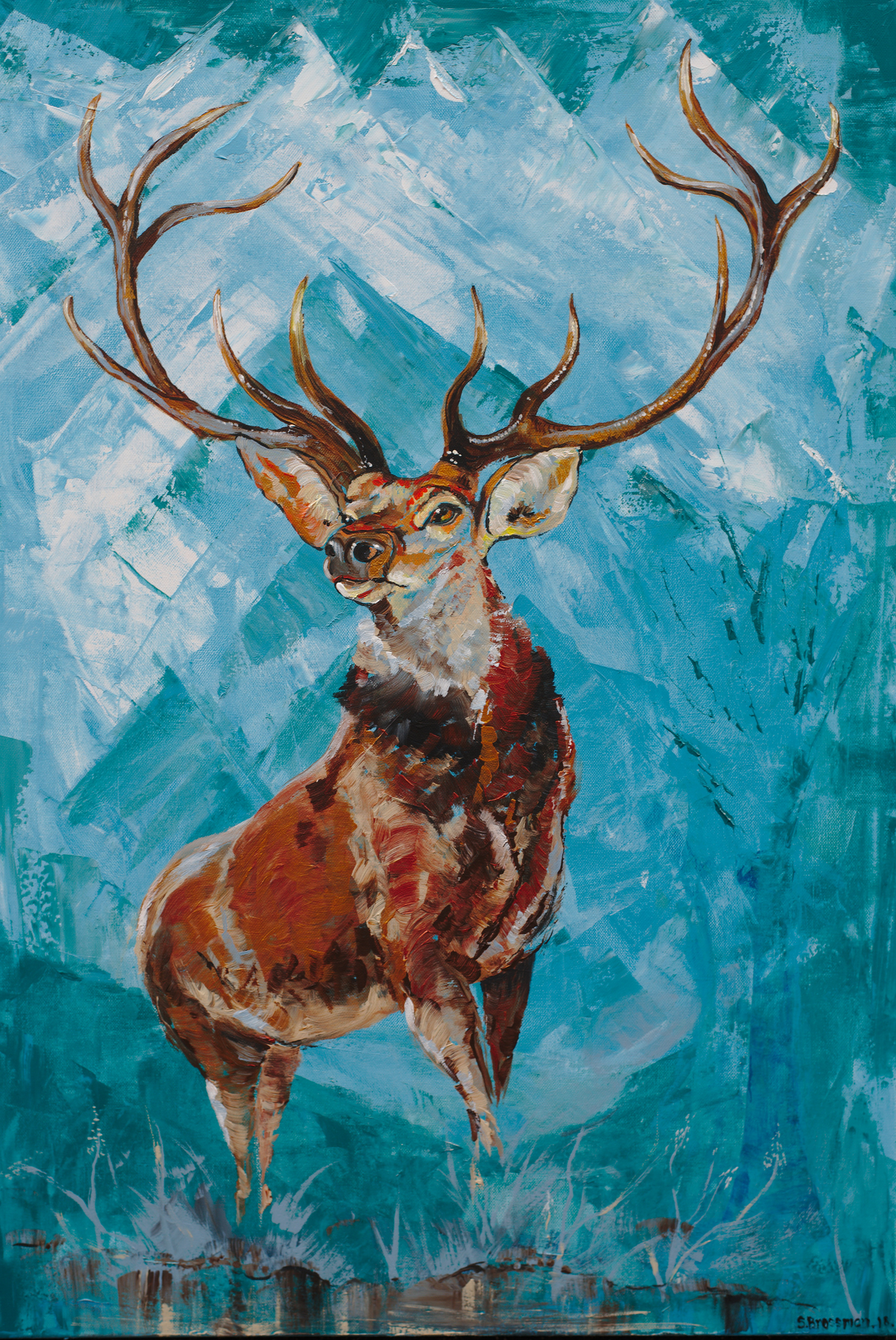 Her story... "It is a calm Christmas morning in the mountains with a splendid view of a large stag, who stands proudly in the dew, warm in a thick coat of golden bronze hues and glistening in the rising sunlight. His large antlers are well balanced, creating a magnificent spiky crown.

His breath hangs in the still air, from the valley below comes the faint smell of a log fire crackling in a ski chalet. The stag in all his brilliance is alone, waiting for his friend the red-breasted robin to alight on his antlers, chirping a message they both seem to understand. Hiding nearby is the cunning little red fox, waiting to drink from the hoof-cracked edges of a frozen pond, and the squirrels who hop from branch to branch with their tails twitching wildly.

Off in the distance the mountains are covered with freshly fallen snow, everything soft and quiet as it settles in for a long cold winter. Ssh! If you listen carefully, you may hear the sound of Santa’s sleigh bells tickling the tops of the mountain peaks, as he races the sun back to the North Pole." 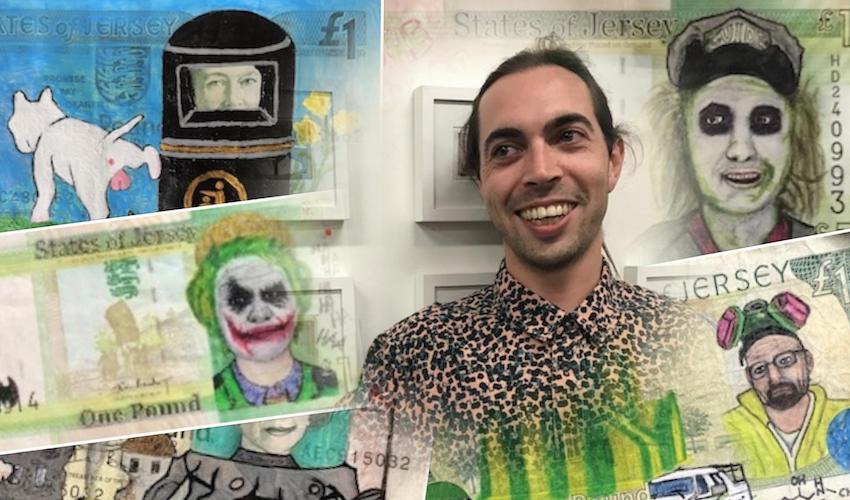 2018 was a big year for Senior Trust Officer Olly Killip. After one of his defaced banknotes caught the eye of mixed-media artist Bob Osborne, Olly was featured in a book alongside famous artists such as Banksy as well as in an exhibition at Saatchi Gallery. More recently, he presented his work for the first time in Jersey as part of Studio Eighteen Christmas Exhibition.

Olly's irreverent designs and willingness to poke fun at anything and everything combines his Christmas illustration. 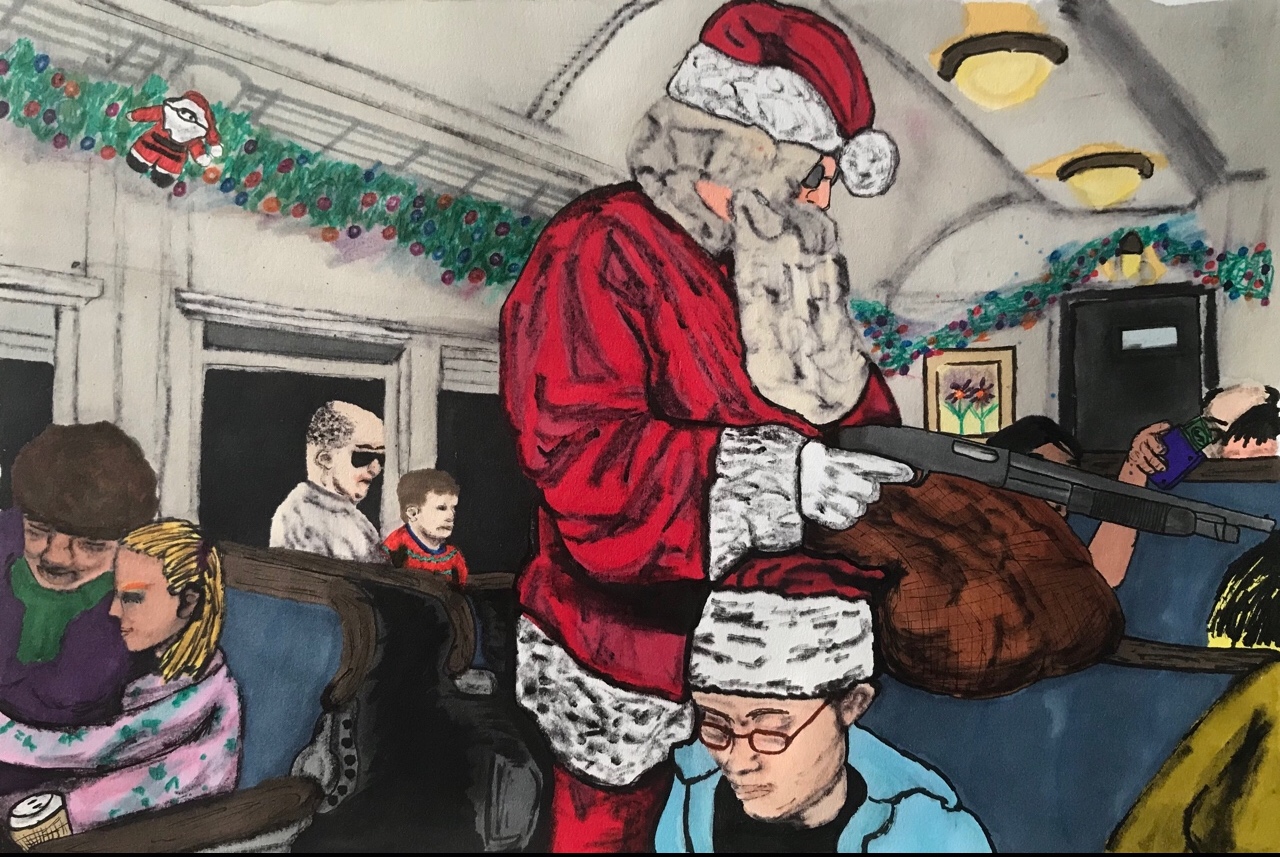 "To give more context behind my Santa image my dad had asked for a funny card so I drew him that design as I knew it would have been unexpected and despite my father being a hippy he actually found it hilarious!" 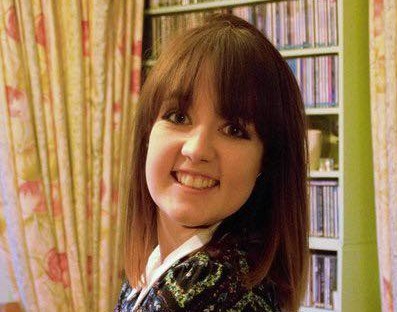 Illustrator Emily grew up with a love of drawing. After a foundation diploma in art and design at Loughborough University, she completed, a degree in Graphic Communication and Illustration BA (Hons). 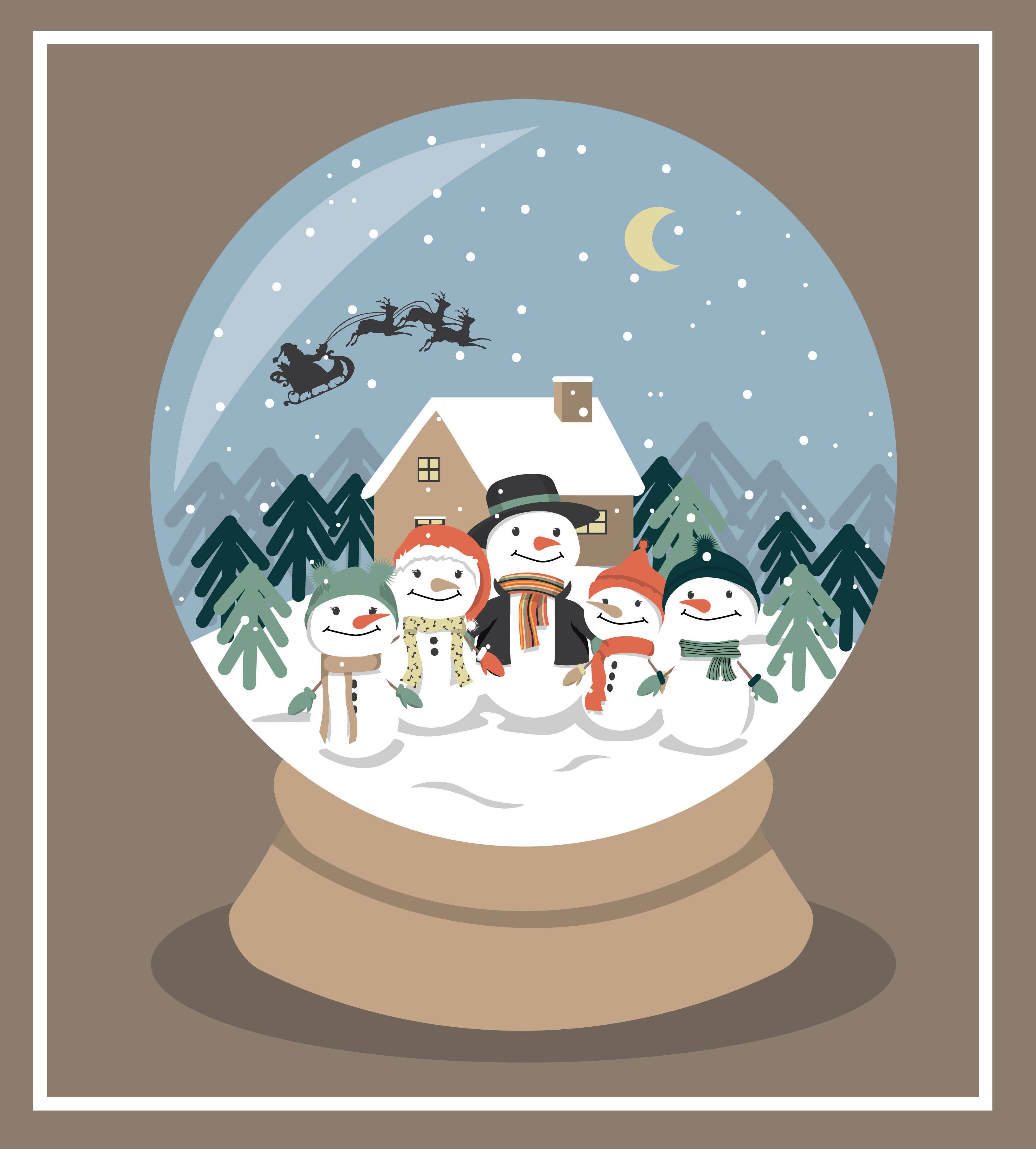 "Christmas is all about family to me so I've drawn us as snowmen!," she said. 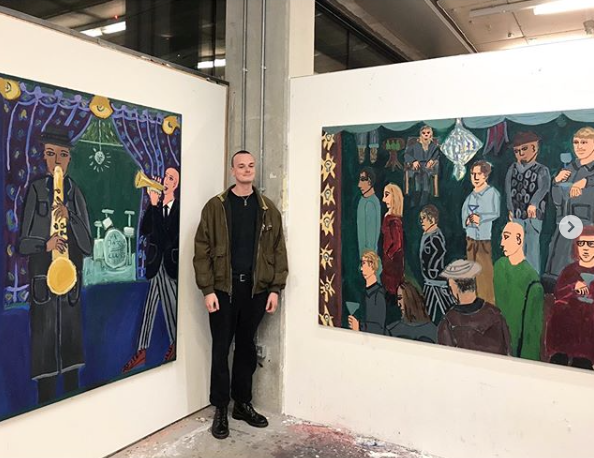 Painter Danny Romeril studied a foundation diploma at Highlands College before moving to London for a BA in Fine Art at Central Saint Martins in London. His work focuses on figure and space and the relationships between them. He also loves working with references to art history and deconstructing painting traditions and languages. 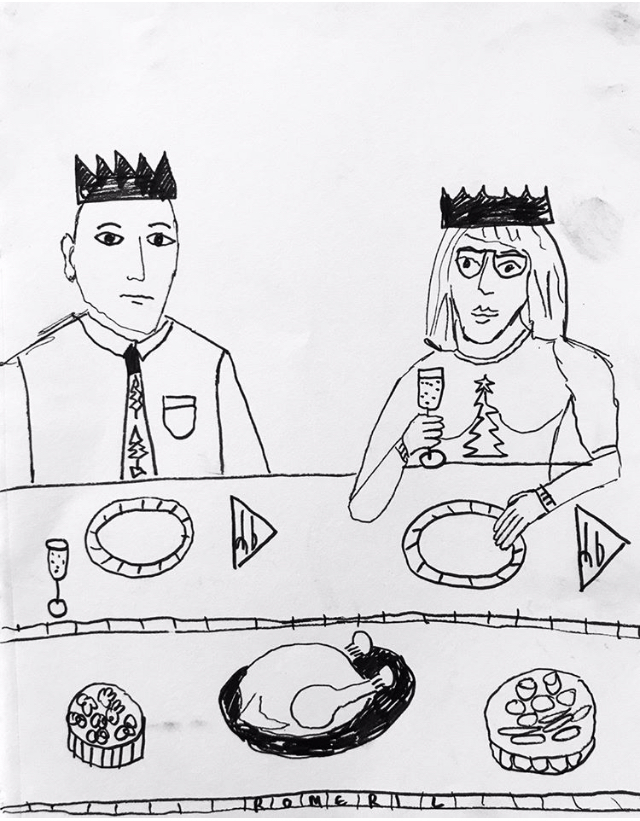 "‘In my Christmas tie’ is me in a tie which has Christmas trees on it feeling not very festive but trying my best, it’s about being a little bit cynical but actually quite enjoying Christmas."

Gabriella is a freelance graphic designer and illustrator, but she also loves to paint and do photography in here spare time. "Creativity is my passion," she says. "And I'm always looking for the next project to throw myself into." 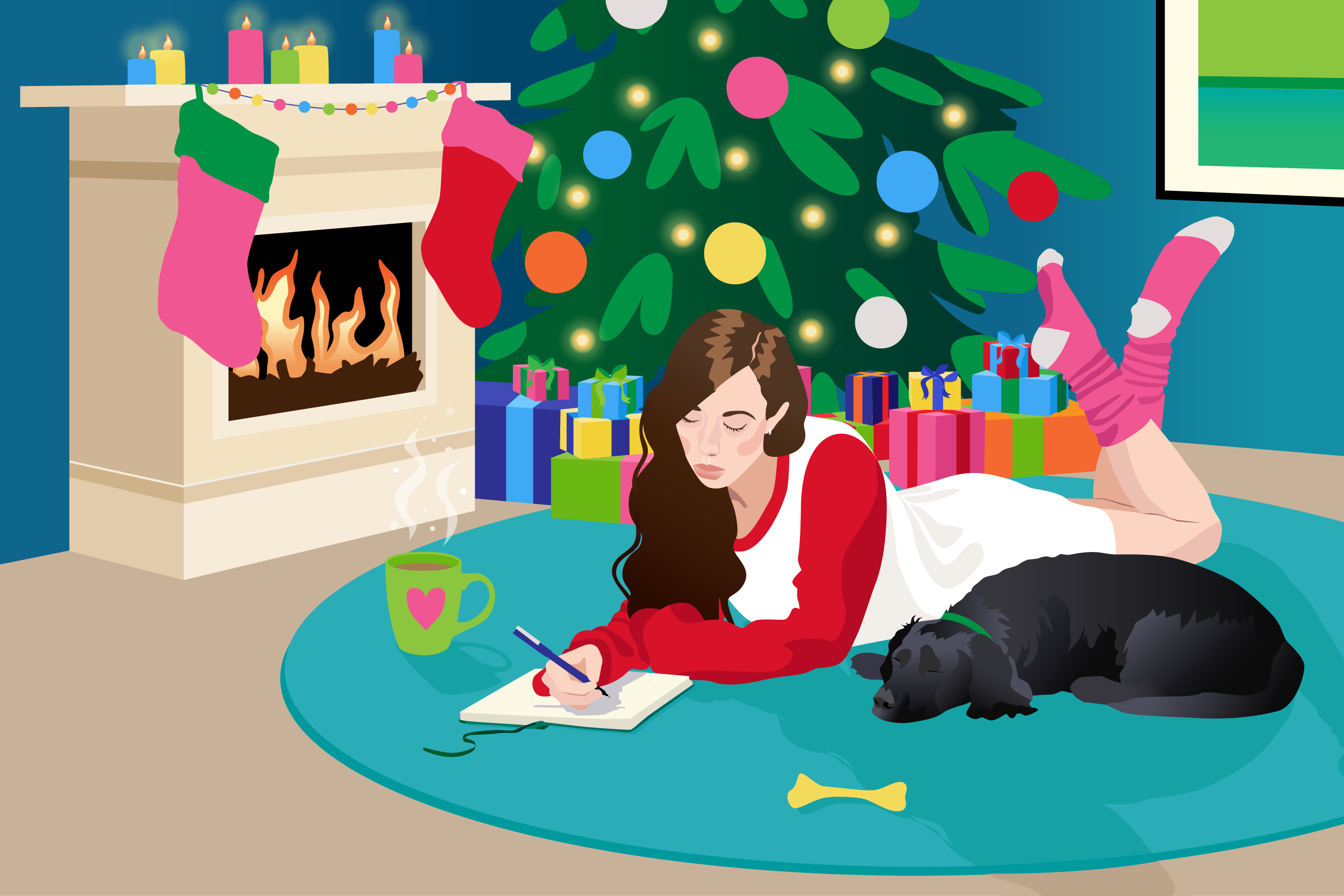 "Just like a lot of artists, Christmas is always a busy time for me, and as much as i have enjoyed it, I am looking forward to winding down in front of the fire, with my dog, a cup of tea and my sketchbook," Gabriella said.

"I have a lot planned for 2019, starting with a collaborative exhibition to help raise money for local charity 'Healing Waves'. And not long after in March I am so excited to be co-creating an all-female exhibition to promote local female artists and give them a platform to display their talent, so there's lots to look forward to."