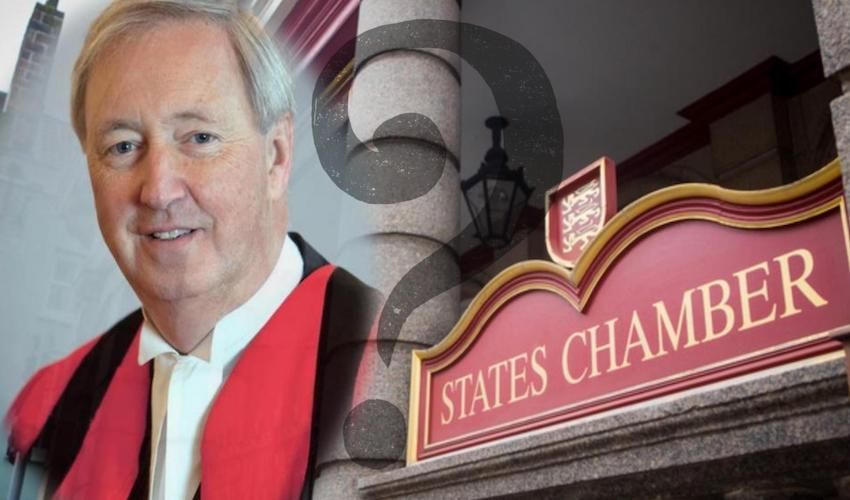 The announcement of the current Bailiff’s retirement has thrown up some age-old questions about the role: why is his chair seven inches higher than the Lieutenant Governor’s? Is there a separation of powers on the horizon? How do you become Bailiff in the first place?

The role, which is more than 800 years old, has had its future thrown into doubt for some time with certain States Members calling for the Bailiff not to act as Speaker of the States due to it being perceived as a conflict of interest. But what about other question marks surrounding the Bailiff’s appointment and duties?

The Bailiff is a job that is as old as Jersey’s independence, but many don’t know what the job entails. Express spoke to Advocate Barbara Corbett who helped to demystify the role behind the red robes.

Advocate Corbett said that although during debates over a separation of powers, the Bailiff’s role has often been described as a ‘dual’ one, really there are three strands to the job.

The Bailiff is the chief judge in the Royal Court and therefore presides over many trials which appear there. It follows therefore that the Bailiff must be a lawyer and it’s a requirement of the role that anyone who is appointed Bailiff has to have been an advocate for a minimum of 15 years.

Perhaps the most controversial elements of the Bailiff’s role, (s)he also chairs States Assembly meetings, ensuring orderly conduct of States Members during the debates which takes place in the Chamber.

This is the ceremonial aspect of the Bailiff’s role, under which anyone in that role must represent the island both locally and abroad.

How do you get to be Bailiff in the first place?

There is an historical precedent that the Bailiff is appointed after progressing through the ranks of the Law Officers’ Department – Advocate to Crown Advocate before being promoted to Solicitor General, Attorney General, sworn in as Deputy Bailiff before finally being appointed Bailiff.

Indeed, Sir William has been in all of these posts except Solicitor General, as well as being appointed QC in 2000. However, Advocate Corbett explained that the progression to Bailiff isn’t as formulaic as it may first appear. She said: “Historically, people have quite often gone from being Solicitor General to being Attorney General to Deputy Bailiff to Bailiff, but actually it’s not followed that pattern the whole time at all… The track isn’t as definite as it seems.”

Following the announcement of current Bailiff Sir William Bailhache’s retirement, calls to separate his legal and political roles have been renewed.

It has recently been announced that Chief Minister John Le Fondré, and Deputy Russell Labey, are putting together a working party to examine whether the Bailiff should remain the Chair of the States, or if an impartial Speaker should be elected, similar to the model adopted in Westminster.

Video: Could Jersey get a Westminster-style Speaker like John Bercow?

Commenting on this issue, Advocate Corbett said that from a legal standpoint, in addition to the importance of impartiality, anything which means an increase in 'judge time' is a positive thing. She told Express: “We’re quite short of judges’ time. There are more court cases and the judges are in greater demand and the time it takes to get a court hearing on is getting longer and longer for a variety of reasons. If you have more 'judge time' then that’s going to be better for the court system.”

Senator Sam Mézec, who has been outspoken on this controversy, described the current system as “undemocratic”.

Senator Mézec made the case for an elected Speaker to preside over the States: “We as a community have absolutely no say over who presides over our parliament, and we will have no say over how the next Bailiff is appointed. In practice, it seems to be the case that people rise up through the ranks of the law officers. This process is unaccountable to the public of Jersey.”

Pictured: Senator Sam Mézec has been very vocal about separation of powers when it comes to the Bailiff's roles as Chief Justice and President of the States.

In the statement announcing his retirement, Sir William gave a nod to the fervent debate about his role as President of the States.

He said: “I have tried to be useful in the role as presiding officer in this Assembly, a role which is not always straightforward, and sometimes positively challenging but it has been stimulating and notwithstanding the debate about the role of the Bailiff in the Assembly, I have always appreciated that members have approached that subject without personal rancour.”

Another problematic aspect of the Bailiff’s role is that it is one that has, so far, only been performed by men. Advocate Corbett told Express that there is no reason why we shouldn’t see a woman in the role, but that “for whatever reason, it hasn’t happened yet”. She said that "lots of jobs have only ever had men in them until they haven't!" Advocate Corbett added that due to the specific requirements of the role, the pool of potential candidates is relatively narrow, but that she knows plenty of female lawyers in Jersey with enough seniority to take it on.

Pictured: Something which this historical role is lacking is women, who, incidentally have also been around for 800 years.

The family lawyer said that where the change needs to happen is in the application for Deputy Bailiff as that’s the most definite 'shoe-in' to being appointed as Bailiff. Advocate Corbett said it could be down to matter of confidence: “What we need is for more women to apply, because if there aren’t any women applicants then you can’t appoint one.”

There's been a lot of talk about whether Bailiff should remain chair of the States Assembly, but what about his actual chair?

The seat the Bailiff sits on in the States Chamber is precisely seven inches higher than that of the Lieutenant Governor due to an argument which took place exactly 400 years ago. In 1618, disputes between the then Governor Sir John Payton and the Bailiff at the time, Jean Hérault, lead the Privy Council to clarify that out of the two roles, it is the Bailiff who takes precedence in the States Assembly - and then they gave him a higher chair to match his elevated status.