"Let us forge ourselves again as one community" 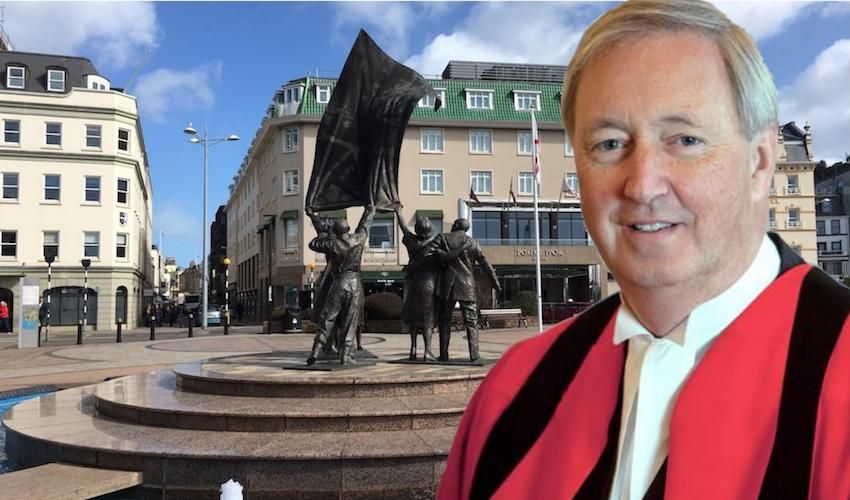 "Let us forge ourselves again as one community"

The Bailiff has urged islanders to "come together" and stand as "one community", as political divides rage across the island over issues including government workers' pay, the environment, and his job.

Sir William Bailhache made the call during his annual Liberation Day speech, which this year comes 74 years after Jersey was freed from occupation by Nazi forces.

In it, he touched on this year's theme of women - both their fight for suffrage and the wider struggle for equality - and made special mention of inspirational islander Louisa Gould, who hid escaped slave workers during the Occupation.

Despite pressing the need to ensure Liberation Day is a "celebratory beacon for the future" while remaining a "commemoration of the past", there was no escaping the present - a moment, the Bailiff noted, currently punctuated by tensions over "the environment, pay disputes, the make-up of elected representatives in the States Assembly, [and] the new hospital". 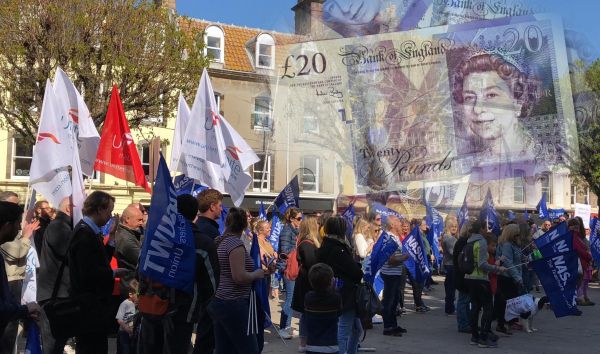 Pictured: The Bailiff's speech touched on the current public sector pay dispute, which has led to strikes.

With a vote over whether his role as President of the States Assembly should be scrapped in favour of an elected speaker being taken off the agenda at the last minute last week, the Bailiff's speech also made brief reference to question marks raised over his own dual role.

Given the divisive nature of these issues, Sir William ended with a call for unity and willingness to work cooperatively for the greater good.

"...Let us not forget that Liberation Day is a day to come together as one community, a day to prompt a common way forward; above all else a day to remember that the essential freedoms which we have were secured 74 years ago at great cost to the Allied forces and to our own people," he said.

"Let us forge ourselves again as one community, standing together to find solutions to whatever problems come our way."

Your Excellency, Chief Minister, all our guests from overseas, Ladies and Gentlemen.

20 years ago or so the celebrations of Liberation Day were relatively low key, at least centrally, although more may have gone on in the parishes. The introduction of the re-enactment of Liberation to take place down here in Liberation Square was a breath of fresh air which reinvigorated Liberation Day and within a few years its significance led us to describe the day as Jersey’s national day.

In past years you will have seen all the members of the States up here on the stage with the Jurats and the Rectors. Jurats and Rectors are not here simply because they wear flowing robes and look colourful, although of course they do. They are here because in 1945, the Jurats, the Rectors and the Connétables, together with a more limited number of Deputies, formed the States of Jersey and in this Re-enactment ceremony it is fitting therefore that we largely recreate circumstances as they were then.

Most of us here today will not need reminding that we are getting older, and one of the challenges facing the organisation of Liberation Day is to ensure that the next generations see it not just as a commemoration of the past but as a celebratory beacon for the future. That is why I am particularly pleased to see the different age groups with the Connétables, ladies representing those here in the Occupation, or the evacuees or deportees, with their grandchildren or great grandchildren, remembering the past and looking forward to the future.

The Occupation was a time when all that was sacrosanct in Jersey was displaced or at best compromised – our traditions, our freedom including not just personal freedom but the independence of our democracy, of our parliamentary assembly, of our judiciary and our prosecution service. Those freedoms, granted to this Island and her people centuries ago, were restored in 1945, but both the past and present shows that they come regularly under threat and we should be assiduous to defend them. Today and each Liberation Day, we remind ourselves of the importance of freedom, of an independent court service, and of our right to self-government including the right to determine our own laws consistently with our long established laws and privileges.

Of course both the Occupation and the Liberation provide good reason for Islanders to look to what is happening elsewhere. This year one of the themes of Liberation Day is the importance of women in our community and in our administration. Today, it seems extraordinary to think that it was only 100 years ago that women received the right to vote – and how much the lot of women has changed since 1940 and 1945. How much more do women expect of themselves today, and – difficult territory – how much more perhaps do both men and women expect of each other. In those days, men at least were able to go out to work which must have helped take their minds off other things. Younger women had to bear a great stress in the war years concerned with providing for their families and children, and the older generation had time to worry those close to them who were exposed to the risks of war, whether those were those left behind in occupied territory or those who had evacuated to the United Kingdom. The deportees in Bad Wurzach had to suffer similar stress, but in addition the particular restrictions on their freedom, the lack of privacy in every respect during their incarceration, and the lack of dignity that goes with it. Unsurprising that there was such depression in those years. And of course there were those who demonstrated great compassion and bravery, like Louisa Gould who lost her life in the Ravensbrück concentration camp gas chamber for sheltering an escaped Russian slave worker.

So when today we find ourselves collectively worrying about the issues of today, whatever they are, whether they be international issues concerning the environment, pay disputes, the make-up of elected representatives in the States Assembly, the new hospital or indeed the role of the Bailiff, all of which are relevant to people in Jersey in one way or another, let us not forget that Liberation Day is a day to come together as one community, a day to prompt a common way forward; above all else a day to remember that the essential freedoms which we have were secured 74 years ago at great cost to the Allied forces and to our own people. Let us forge ourselves again as one community, standing together to find solutions to whatever problems come our way.

Thank you very much.