BASE jumpers locked out of high-rise roofs 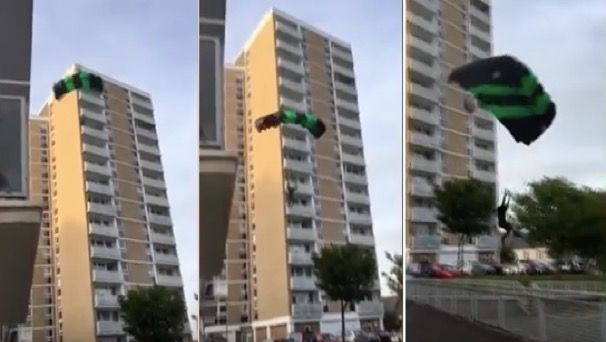 BASE jumpers locked out of high-rise roofs

Locks have been changed on all entrance points to the roofs of high-rise buildings in a bid to deter BASE jumpers after a video of a man parachuting from La Collette flats went viral last month.

Speaking in yesterday’s States Assembly, Minister for Home Affairs Kristina Moore said that the security measure followed discussions between the Police and Andium Homes over how to prevent the “very risky” practice from taking place on local buildings.

Her comments came in response to questioning from Deputy Kevin Lewis, who raised concerns following the release of a 24-second video of a local daredevil making a seven-second parachute plunge from the top of La Collette’s 15-storey block and landing in the nearby car park.

His feelings were shared by a number of islanders – including a local skydiver – who expressed alarm over the jumper’s actions after viewing the video, which was shared hundreds of times on social media.

Police confirmed that they would not bring any charges against the La Collette jumper as no laws were broken, but chose instead to emphasise safety concerns with the practice alongside the Fire and Ambulance Services.

Deputy Moore added that Police will now cover the topic of BASE jumping in lessons delivered to secondary school pupils as part of the anti-youth crime ‘Prison! Me! No Way!!!’ campaign to, “…highlight the dangers and risks involved to individuals and bystanders.”