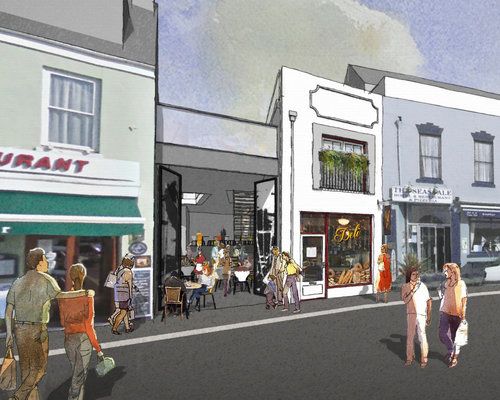 A restaurateur in Gorey hopes to alleviate fears over a new development planned for the pier.

Laurraine Falle has applied to build a new restaurant, delicatessen and performance space a few doors down from her existing restaurant Feast, on a site which has been derelict for over 20 years.

But neighbour Andy Makin, who lives at Fountain Court, immediately adjacent to 18 Gorey Pier, isn’t happy with the proposals and has set up a Facebook page called “Keep Gorey Pier undeveloped” to co-ordinate opposition to the plans.

He has also been handing out flyers to local residents asking them whether they think a 220-seater restaurant is taking “too big a slice”. So far, over 500 people have liked the page and he says more than 340 letters of objection have been sent to the Planning department.

However, Mrs Falle claims that her proposals are delivering much-needed facilities for the area and are based on the feedback to previous plans to develop the site for housing, which had highlighted the need for a community space, shops, restaurant and a gallery.

And she is keen to dispel some of the misinformation surrounding the development, which will incorporate a 120-seater restaurant – a hundred covers fewer than its opponents claim – with seating spread throughout the inside and on the proposed new terrace.

Mrs Falle believes there is a demand the facilities she will be offering and has received widespread support from the less vocal elements of the community.

“What I’m most concerned about is providing a service for people in the local area. It’s not unreasonable for them to expect these amenities on their doorstep.”

LibertyBus say they have begun trialling a new route 13 to Gorey Pier in the evenings and that they will look at expanding services on any route that shows consistent increased demand.

The plans for 18 Gorey Pier and The Old Sail Loft are due to be considered in September and, if successful, it’s envisaged the new venue will open towards the end of 2015.

Posted by Andy Makin on Jul 27th, 2014
Without Prejudice. Mrs.Falle is in talks with Liberty Bus ?? I find this interesting. Is this development going to be some kind of new tourist attraction ? These people are deluded if they honestly think that people are suddenly going to start walking to Gorey Pier because a new restaurant has opened... I do not believe that Liberty Bus will restructure the service. If they do then that will make a mockery of the residents and existing businesses.
Posted by Joanne Nash on Aug 4th, 2014
The proposed ground floor plans clearly show 92 exterior covers and 122 interior covers 122. 92+122 does not equal 120!
Posted by Alaistair Jerrom-Smith on Aug 4th, 2014
@Andy Makin, I don't think there's anything in the article that says Mrs Falle is in talks with Liberty Bus. It just says that Liberty have begun trialling a new no. 13 bus route (according to their site it started on 26th May) ...
Posted by Andy Makin on Aug 4th, 2014
Liberty Bus have just denied any knowledge about restructuring the service to Gorey !
To place a comment please login Login »