"Big Brother" campaign launched to get States workers on side 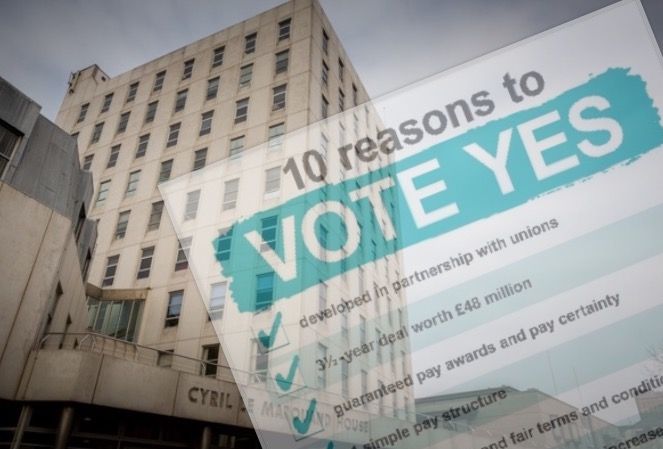 "Big Brother" campaign launched to get States workers on side

States workers say they’re being bombarded with “propaganda” urging them to ‘vote yes’ to a controversial pay deal that could give many of them a real-terms pay cut, Express has learned.

Sources described a “Big Brother”-style atmosphere within government buildings, where they say they are confronted with ‘Workforce Modernisation’ campaign materials “at every turn.”

200 A3 posters entitled '10 reasons to VOTE YES’ have been distributed to every States location with affected employees, including the hospital and prison. Those reasons included “modern and fair terms and conditions”, “quicker to earn more annual leave” and maintaining the “second-best-paid sector in Jersey.”

2,000 of those were printed in miniature postcard format and reportedly left across every desk in Cyril Le Marquand House - the States’ main building and home to the Taxes Office - as well as other relevant locations. 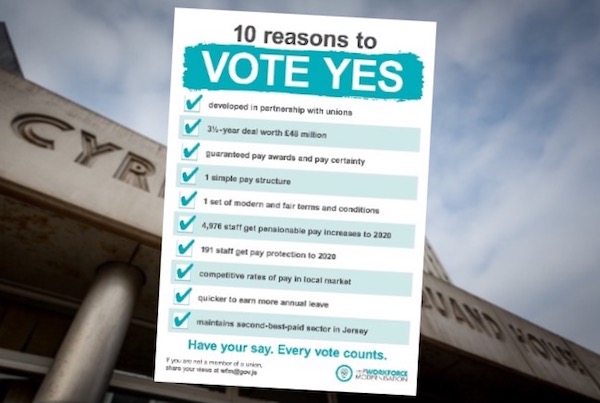 While those can be thrown away if not wanted, workers can’t avoid the new ‘vote yes’ desktop screensavers set on all States computers. When locked, workers’ PCs now display a bright blue screen emblazoned with the Workforce Modernisation logo.

“It’s time to vote [tick]… Have your say. Every vote counts,” it reads.

Sources variously branded the combination of tactics as “propaganda”, “manipulation”, and simply “annoying”.

Their purpose is to encourage the 5,167 staff – including health workers, childcare and youth workers, prison staff, civil servants and manual labourers – in the programme’s first phase to vote in favour of controversial moves to amend what the States dub an “out of control pay system.”

Pictured: One of the new backgrounds on States worker computers.

Spearheaded by new Chief Executive Charlie Parker and his £700,000 team of four UK consultants, the initiative would see the number of staff pay grades reduce from 75 to just 10. While this may see some salaries rise in the short-term, unions have warned that the deal – ‘locked in’ until 2020 – would leave the majority of workers worse off by not keeping pace with inflation.

In a bid to get workers onside, unions reported that they had also been offered an additional £400 each to accept their employer’s terms. Some labelled the move a "bribe."

In response, members of civil servants' union Prospect put up their own 'vote no' acronym posters alongside the States' materials. On the posters, they brand the proposed "simplified" pay package as "misleading" and "manifestly unfair to civil servants."

Referring to the £400 offer, the poster later quips: "You could pay off your extra childcare bill (for one year only)!" 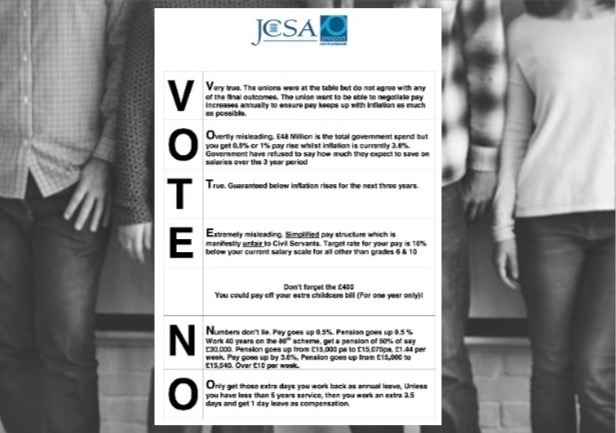 Pictured: Prospect's 'Vote no' posters - many of which are reported to have been taken down.

But many of those have since been taken down, while the 'vote yes' equivalents remained. One source told Express that this had been on the instruction of "senior" staff members, who told their teams to remove the posters when they find them. They expressed frustration that union views were not given "fair and equal" coverage within States buildings.

The States said £500 was spent on creating the 'vote yes' materials:

The concept work was conducted in-house at no extra cost. They declined a request to comment on the 'vote yes' campaign.

Union members are currently being balloted on the final pay offer, and will jointly reveal their vote on the programme on 12 February.

Posted by Pat Devine on Feb 2nd, 2018
This 4 year pay cut will have a devastating effect on ordinary workers. It is difficult to see how the hospital will be able to function, when, as predicted, nurses will be forced to return to the UK as they barely can afford to live in Jersey at present. The projected fall in the pound and rising RPI, due to Brexit, will mean the pay cuts will be even more dramatic. It is total folly to expect workers to vote for a 4 year pay deal, when we live in the most uncertain of times. Already the hospital is using 650 zero hour contracts per week as they cannot recruit nurses. Should this deal go through then those nurses will lose part of their unsocial hours pay. The General hospital could be on it's knees in the coming year. Vote NO.
To place a comment please login Login »