Broad Street to remain traffic-free until end of the year 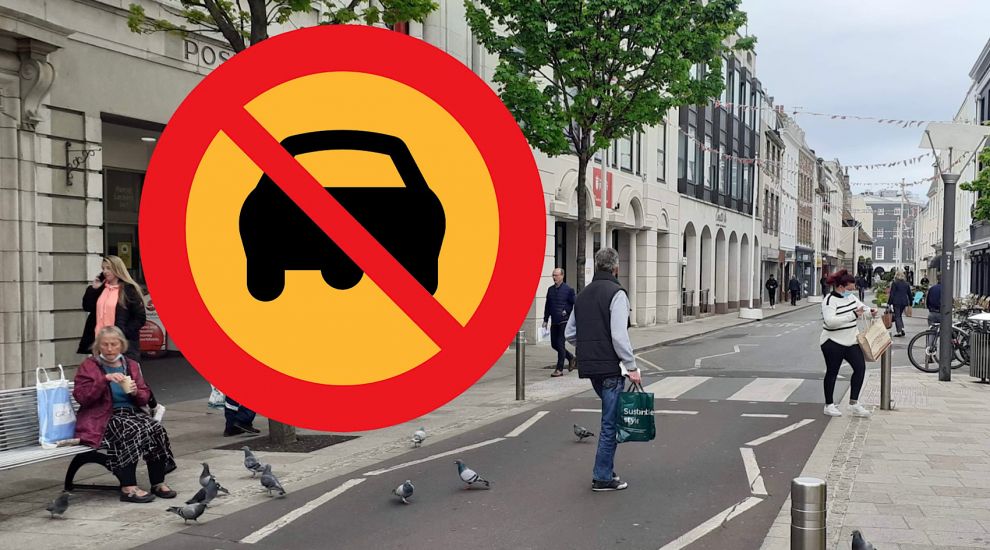 Broad Street to remain traffic-free until end of the year

Broad Street will remain closed to traffic, apart from buses, after 11:00 each day until the end of the year, after politicians voted to trial the idea today.

States Members voted to accept the amended proposal from Constable Simon Crowcroft, which will see the idea trialled and then reassessed at the end of 2021.

Broad Street first became a traffic-free zone past 11:00 daily one year ago following covid concerns over crowding in the area.

Constable Crowcroft's original idea, which would have seen this arrangement remain in place until the end of 2021 as a trial, was tweaked by Infrastructure Minister Deputy Kevin Lewis to allow buses to pass through the area too. Deputy Lewis referred to this as a 'sustainable transport corridor'.

Pictured: Broad Street has been closed to traffic past 11:00 since last May.

States Members also accepted a suggestion from Deputy Inna Gardiner to ensure that extra on-street parking for disabled drivers in central town and around Broad Street, and bus services to and from the area is put in place by 31 July 2021.

Speaking ahead of today's debate in the States Assembly over the measures, Constable Crowcroft said: "All kinds of changes to streets, from large cities like Edinburgh to small towns like St. Helier have been made as a result of the pandemic, and people have realised some of the changes because of the pandemic have actually made the towns and cities better places to move around.

“That’s why I’ve urged... the Government to seize the opportunity to 'build back better' in Broad Street."

He later added: "This is a trial, let’s see how it works with the buses coming through Broad Street, mindful of the fact that we won’t have all the other traffic that was using Broad Street as a convenient shortcut to avoid the ring road."

Posted by Jon Jon on May 13th, 2021
Doesn’t crowcroft get it ,you make it harder getting into town by car ,people won’t bother going into town,so in a way he gets what he wants,shoppers stay online,shop keepers go under!
To place a comment please login Login »